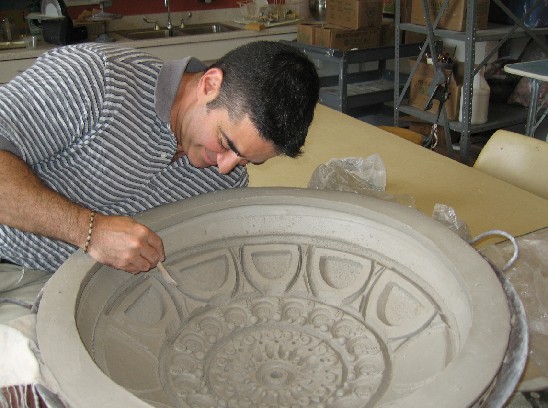 Argentine artist Alfredo Ratinoff believes that being a “gypsy” has shaped his identity and the creativity that fuels his work. As we chat in his [Hyattsville studio, surrounded by his sculptures and mosaics, he explains that his art reflects his experiences with fragments of different cultures and personal loss.  Art provided a refuge, he says. His favorite mantra is “Art cures.”

Alfredo started his exploration of other cultures early.

“My first memory is being at the airport about to board a plane with my parents. Everything that happened in my life is tied up with a trip and travel,” he tells me.

He spent the first 11 years of his life moving between his native Buenos Aires and cities such as Athens, Rome, Paris, Madrid and Tehran.  Loss – of loved ones, country and home – is a theme woven into Alfredo’s life and work.

Due to his frequent travels, Alfredo didn’t have many toys and had to leave his favorite possessions behind more than once.

“I learned to treasure the images inside because I couldn’t get too attached to things,” he says.

Losing things as a child, he says, reinforces the need to dowhat you love. Alfredo’s parents divorced when he was a pre-adolescent, and both of them passed away when he was a young adult studying art in Europe. Losing his parents meant losing his ties with Argentina. After leaving Europe, Alfredo moved to Miami. He feels that everything started for him there in terms of developing a sense of belonging.


His first shock upon entering the U.S. was the importance of the written word. “Without credentials on paper, people don’t pay attention,” he says.

It wasn’t the only difference. Alfredo believes “the American way is like a written recipe with many ingredients. You must follow the steps to achieve your goal. In Argentina, you grab all the food in the fridge and throw it together.”

Alfredo first came to Washington, D.C., in the 1990s to visit a friend. He liked the area because of the culture, education and diversity. However, he also experienced culture shock. Unlike Miami with its strong Cuban influence, in D.C. he found people to be more “subtle and restrained.” Everyone seemed rushed and focused on achievement. It was difficult to adapt to, Alfredo says. He feels that people “don’t live fully and are on edge.”

Following his first exhibit in D.C., he returned to Miami to confront loss once again, this time due to Hurricane Andrew, which destroyed many of his possessions and work. After a yearlong stay in Key West, he moved to D.C. due to an increase in demand for his work in this area.

Alfredo discovered Hyattsville by chance. As a visual person, he was attracted to the old houses.

“Each house had a history, a sense of belonging,” he remembers. He intuitively knew that he belonged here and soon purchased a 100-year-old colonial with his partner, Shane.

Although they have been living in Hyattsville for over seven years, Shane and Alfredo have only recently forayed out to meet neighbors. Now, they are discovering that Hyattsville is a rich universe with many cultures and interesting people.

“For the first time in my life, I don’t feel the need to travel anywhere,” Alfredo says.  “You only have to cross the street to meet shining people who offer friendship, advice and other riches.”

He finds that living in Hyattsville is like coming home to a place he never knew existed. Understanding where you belong in life is critical, he says.

“Once you discover that, you have a core, an anchor. As an immigrant, you only have yourself. You must commit to your dreams when you arrive in a new country. But you can’t sit and wait for those dreams to happen — you have to create them, even when faced with challenges.”

Julia Gaspar-Bates is a cross-cultural trainer and consultant. “Cultural Connections” is devoted to bringing forward the voices of immigrants who have settled in Hyattsville.