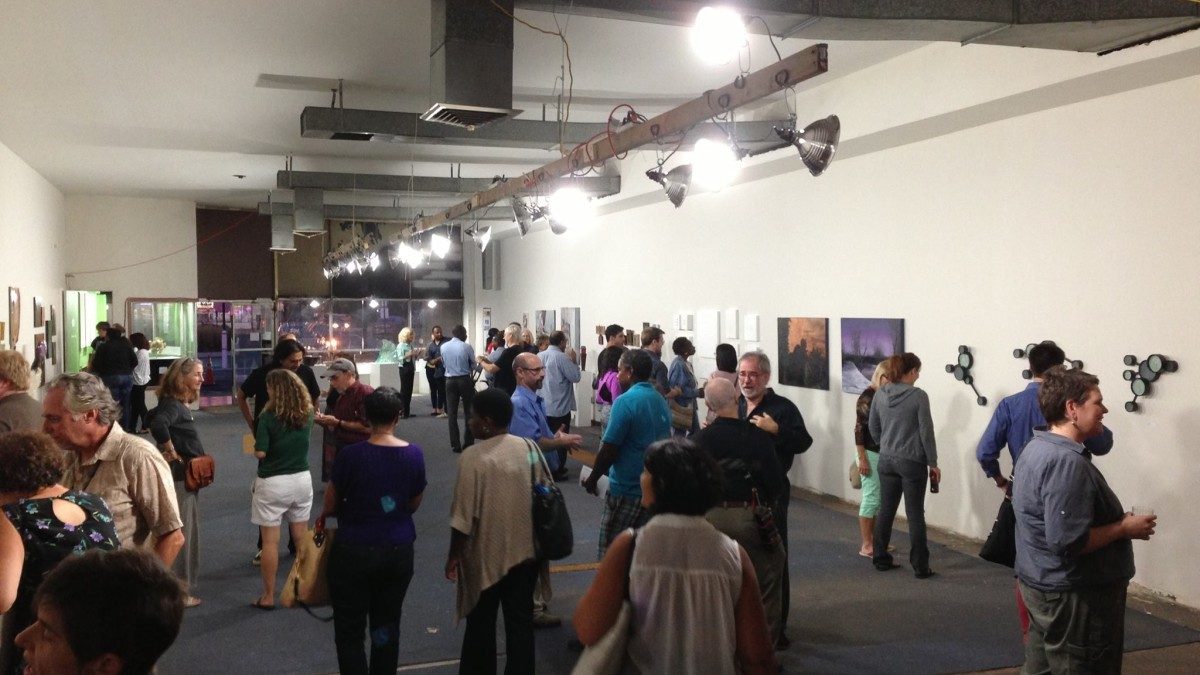 The former Fleisher's Jewelry store in the Shops at Queens Chillum was transformed into a weekend art gallery during the month of September 2013. Photo by John Paradiso (Sept.5, 2013)
Art

BY GRETCHEN BRODTMAN — Many of us wonder what’s next for some of the recently vacated spaces in our community, anticipating what is being built behind the paper in the windows.  Shoppers looking through the windows of the former home of Fleisher’s Jewelers, 3108 Queens Chapel Road, on  September 5, saw a display of a new kind of treasure: drawings instead of diamonds, paintings where there once were pearls.

This art exhibit, called the Jewel Box Pop Up Gallery, will be open weekends throughout the month, and features work from 18 artists in a variety of mediums. Several local groups (including Gateway and Hyattsville Community Development Corporations, the Art Lives Here initiative and Joe’s Movement Emporium)  partnering with and supported by the Shops at Queens Chillum have created a gem of a September with this gallery, as well as performances and movement activities.

“The Shops at Queens Chillum is an anchor commercial center for the Mount Rainier, Adelphi and Hyattsville communities,” adds Carole Bernard, executive director of the Gateway Community Development Corporation. “It is our hope to bring placemaking initiatives to this area to not only support the major stores located there, but also to highlight the various talented artists who make the Gateway Arts District a unique destination.”

According to Hyattsville Community Development Corporation Executive Director Stuart Eisenberg, “vacancies ( in retail spaces) generate uncertainty. We see a temporary occupancy by a tenant  [replaced] with visually appealing, vibrant displays, [and] it fills a void in a streetscape or untenanted retail and commercial spaces.”

Joan Weber of the Shops at Queens Chillum knows that the vacancies can be upsetting because the stores are “part of the life of the community.” Weber says she is thrilled to be supporting the initiative, which will feature Creative Saturdays family activities programmed by Joe’s Movement Emporium. These free activities include yoga, hula hoops, jump rope and a variety of musical performances. On September 20, there will be an evening video and animation performance of Bartok’s Miraculous Mandarin.

All events are located in The Shops at Queens Chillum, at the intersection of Queens Chapel and Chillum roads. The gallery is open Thursdays and Fridays 7-9 p.m. and Saturdays 1-5 p.m. Creative Saturdays featuring family activities begin at 1:30 p.m. September 7, 14, 21 and 28.

Hyattsville Life and Times, 8 years ago 2 min read
From the Editor

From the Editor: Professionalizing parenthood