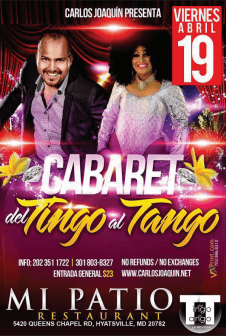 A poster advertises a cabaret at $23 a
Business

BY SUSIE CURRIE — At the Prince George’s County Board of License Commissioners meeting on May 1, a hearing on Mi Patio’s alleged violations was postponed after the board chairman recommended additional citations.

Franklin D. Jackson’s ruling came after testimony from Chief Liquor Inspector Albert J. Fanelli about his visit to the Dominican restaurant, located at 5420 Queens Chapel Road, in the early hours of Saturday, February 2. Fanelli said that he was responding to a noise complaint when he arrived at 2:55 a.m. to find both front and back doors locked with customers inside, which is forbidden by the fire safety code.

Jackson said that if the restaurant was open at that point, it was “operating past the hours that were approved by the board” – another violation. He directed that the charges be amended to include this new offense and continued the hearing to June 12.

Meanwhile, Mi Patio’s application for a Special Entertainment Permit – the original reason it was on the docket – was delayed at the owners’ request until October 2. Owners Danny Medina and Yanira Merlos had applied for the permit so they could host DJs and live bands.

Mi Patio currently operates under an exemption that, according to the application form, is for establishments that are “in the principal business of providing family entertainment.” With this exemption, a business may not impose a cover charge or “provide entertainment that is clearly secondary to the dining experience.”

In the September 2012 letter granting the exemption, Jackson reminded the owners that Mi Patio was prohibited from, among other things, charging admission and carding or searching patrons at the entrance.

But as recently as April 19, according to Mi Patio’s Facebook page, it hosted a cabaret with a $23 admission fee. The page identifies it as a “lounge” with hours from 9 p.m. to 3 a.m. Pictures show ads for hookah nights, bands and DJs. An undated advertisement for “Domingos Millionarios” mentions drink specials and the fact that to enter, patrons must show an ID to prove they are over 21.

Council President Matt McKnight, during an April 15 council meeting, said the social-media site proves that Mi Patio is “clearly not marketing itself as a family restaurant.”

Nearby neighbors, who turned out in force to the city’s April 1 public hearing, agreed. At the outset, Medina’s lawyer, Gene Pitrof, said that he understood “noise is the issue with the city and the residents around the restaurant.”

Several such residents, both old and new, echoed that point. One woman, who moved into her house across Queens Chapel Road six months before Mi Patio opened, said, “I’m hard of hearing. But last night, I could hear the music from my living room, with the windows closed and the TV on. … The thumping comes right through the foundation of the house.”

Police Chief Douglas Holland told the council that over the last 23 months, police have responded to 54 calls for service at the restaurant, nearly half of which were noise-related. The majority of calls, he said, are between midnight and 3 a.m.

Some councilmembers also get calls during those hours. Paula Perry (Ward 4) and Tim Hunt (Ward 3) each recalled driving over after midnight when residents called them to complain of the noise.

“I was sitting in my car across Queens Chapel Road and my car was vibrating,” said Perry. “When I opened the door I couldn’t believe how loud the music was. I called the police myself.”

But supporters of the restaurant were skeptical of the noise complaints, wondering aloud if perhaps the music was coming from Sahara Oasis or Lee’s, two nearby businesses that already have Special Entertainment Permits. One 24-year-old nurse who emigrated from the Dominican Republic 11 years ago, says that she usually can’t hear anything until she opens Mi Patio’s door. “Sometimes, I’m not even sure they’re open.”

Several others praised the restaurant for providing jobs and a “home away from home” for the Dominican community.

Pitrof said his clients are “willing to forgo the Monday through Thursday entertainment” as well as eliminating live bands “if necessary.”

After a meeting with city staff, Pitrof asked for a delay on the hearing, to give the owners time to foster relations with their neighbors and address problems that were raised. The city went on record opposing the delay on April 16, but by that time it had already been granted.

Legend and Lore: He put the Hyatt in Hyattsville

From the Vice President: Safeway closes chapter on an American way of life

Hyattsville Life and Times, 11 years ago 4 min read
Beyond Hyattsville

Community Forklift wins small business award from eBay, thanks to its mission and its fans