Though state and federal bans on evictions ended this summer, county assistance programs are helping keep renters in their homes. City councilmembers Danny Schaible (Ward 2) and Rommel Sandino (Ward 5) are among those who believe more can be done to help tenants.

Maryland received $258.1 million from the federal Department of the Treasury for the Emergency Rental Assistance Program. Prince George’s County was given $84 million of that funding and distributed $30.8 million of it as of early October, according to a press release from County Executive Angela Alsobrooks. Funds for rental and utility assistance have reached more than 4,100 households in the county.

However, the county has a backlog of 7,000 applications for assistance, said John Sanchez, an outreach specialist at the Housing Initiative Partnership, a nonprofit housing developer with an office in Hyattsville. His organization is among those that have stepped in to help review applications.

The statewide ban on evictions, which began on April 3, 2020, and expired on Aug. 15, 2021, temporarily stopped the eviction of tenants with substantial financial losses due to the pandemic.

Last month, county courts were inundated with eviction requests, according to Schaible. This led the county courts to limit evictions to roughly 200 hearings a week, he said.

This cap on eviction hearings has remained in place throughout October, according to Sanchez.

The county’s Emergency Rental Assistance Program offers relief to landlords on behalf of renters experiencing financial difficulties as a result of COVID-19. This year, the county also started sharing some funds directly with tenants, according to Leisa Bullock, the Housing Initiative Partnership’s director of resources and communications.

Most landlords of large apartment complexes continue to apply for assistance for their tenants to ensure they get paid, according to Sanchez. Landlords can apply for up to 18 months of rental assistance for tenants, so many property owners apply for every tenant who is behind on rent.

Hyattsville landlords contacted by the Hyattsville Life & Times did not want to go on the record. Oglethorpe Condominiums onsite manager Marcus Graddy said there has been no increase in evictions since the moratorium. He noted that in the last year-and-a-half, only one person was evicted from the complex.

Sanchez said that at smaller apartment complexes or mom-and-pop apartment rentals, applying for assistance falls largely on tenants. Smaller landlords may rely on their tenants’ rent for their own month-to-month expenses. So landlords file for eviction in court rather than wait for rental assistance funds to come in.

Lee Crosby, a tenant at the Chesapeake Landing Apartments in Landover Hills, applied for rental assistance. Despite the application backlog, the funds arrived in time, before her landlord filed for eviction in court.

“When my landlord called me and told me how much the county had paid for me, we both cried on the phone,” Crosby said. “[We] couldn’t believe how much [the county] paid.”

In providing assistance, the county prioritizes households unable to pay half of their rent, those that are crowded, and those below the poverty line. Minority tenants and single-parent households are also prioritized.

City Councilmember Rommel Sandino thinks tenants need more help applying for rental assistance. He worries that tenants threatened with eviction leave their housing too soon, rather than applying for aid.

Kayla Williams, a staff attorney at the Community Legal Services of Prince George’s County, says “people are panicked because their landlords are starting to send notices to vacate, and tenants want to know whether they have to vacate based on that notice alone.”

A notice to vacate is given to tenants at least one month before their lease ends if a landlord wants them to move out at the end of the lease, according to the Maryland attorney general. If tenants do not move out, the landlord must file for eviction in court, and tenants receive an official summons at that point.

The Housing Initiative Partnership is door-knocking to offer application assistance to individual tenants facing court judgments for eviction, according to Sanchez; about half of those they speak with accept the offer.

In response to the end of the Maryland eviction moratorium, CASA — an immigrant advocacy organization — hosted a rally for tenant protections outside the Maryland State House in Annapolis on Oct. 1. 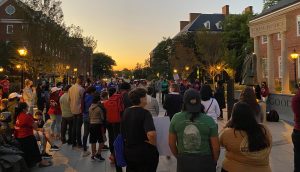 According to Del. Wanika B. Fisher (D-Prince George’s), who spoke at the rally, Hogan has refused to fund the bill.

Hyattsville resident Maria Lara also attended the rally, and said she knows a lot of people who have been evicted because “they have no knowledge or any help, special lawyers or [anything] like that.”

Students, Residents March to Save the Guilford Woods

Parents speak up for a new elementary school