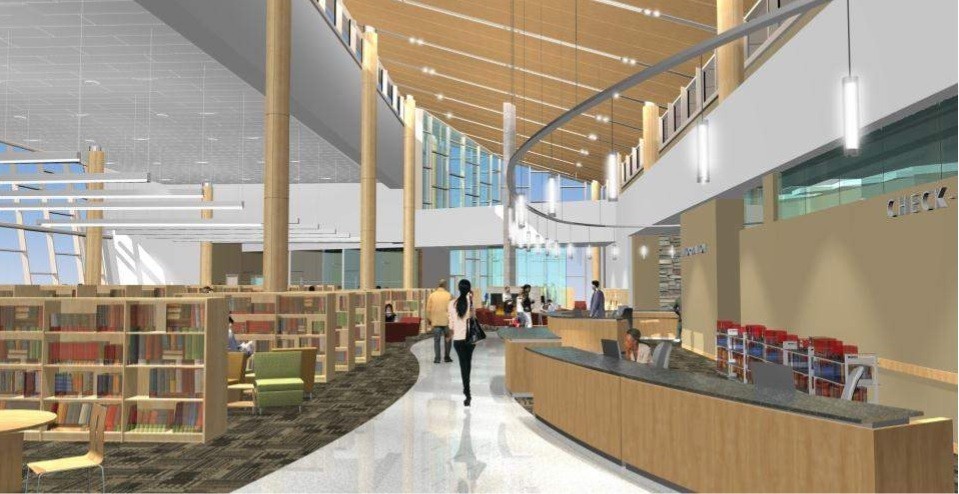 The final community meeting is on September 16 at the Hyattsville Memorial Library, 6530 Adelphi Rd.

On Wednesday, August 13, the Prince George’s County Memorial Library System and the development firm of Grimm + Parker held a second community meeting in Brentwood to discuss updates on proposed plans for the Hyattsville Library.  The first community meeting was held in College Park.

Community attendance was light and there were few voices not directly affiliated either with the architects, library system, or local politicians who have a vested interest in the outcome.

The meeting opened with a presentation from Grimm + Parker detailing their vision for the library. The majority of the presentation focused on reasons why the current library is insufficient to the changing needs of the community, and transitioned into three plans for replacing the library.

Despite questions from several audience members about potential renovation plans, it was made clear that neither G + P nor PGCMLS were considering that option.

Community members also voiced concerns about the presentation’s perspective and information. The presenter for G + P was clearly making a case for total replacement and, in doing so, made strong arguments regarding the existing building’s capacity, efficiency, and potential for renovation.  Developers say the new building would take advantage of natural daylighting, have a “healthy” outdoor environment, and be overall more sustainable.

When asked about these statements, including “older buildings cannot be brought up to LEED Standards unless you completely encapsulate them in a new building”, the spokesperson responded simply with “the [library] building has outlived its useful life.”

According to West Area Manager Catherine Hollerbach, “We build our new buildings and do our renovations to LEED standards.  New Carrollton will be LEED Silver standards, and Hyattsville will be the same, but we do not file the LEED paperwork and go through the official LEED process because that is very expensive.  We were told by the architect at the last meeting that getting an old building renovated to LEED standards is more expensive just because of the many modifications that need to be made to the systems like HVAC and to the structure itself.”

In June, the library was named to Preservation Maryland’s 2014 “Endangered Maryland” list as a threatened historic site.


Three options for a new building were presented in sketch form, displayed by very preliminary drawings that did not include dimensions, elevations, or clear space plans. All of the options included a ‘great room’ for the main adult circulation area, a children’s area, meeting room, and small teen space.  Dimensions for the new library are projected to be around 35,000 square feet including the staff areas not open to the public.

One option, Option C, compressed the building program into a compact two-level structure surrounded by green space, with parking concealed on the ground level.

According to the preliminary sketches, all three options do preserve the iconic saucer feature.  However local group Save Our Saucer, says it is not just after “saving the saucer,” but seeks a renovation that preserves the whole facility’s historic character while accommodating modern and future needs.

Community members also questioned why the new library would be around half the size of the current 62,000 sqft building; the response from G + P was that the existing library is simply too big for the community, and despite statements about significant growth in the Hyattsville area, that a much smaller library would allow the county to economize on systems, staffing, and programmatic costs.

Hollerbach says this is no cause for alarm, because County adminitration offices are moving to a Largo Kettering location and the maintenance operations are moving to New Carrollton.  She says the existing public portion in Hyattsville is now 39,000 square feet and the proposed is just over 35,000, and that “if we put it all on one level and take out the extra hallways and staircases, the useable space is very close to the same.”

The architect’s spokesperson also noted that any monies saved by doing a renovation of the library instead of a replacement would be spent over time in higher operating costs.

According to G + P, the current timeline would provide a schematic design in fall of 2014 and final design in late 2015, with the new building construction in 2016.

At the end of the presentation, community members were given the chance to express “what would make the project a success” for them. Suggestions included clearly defined walking paths, incorporating the existing saucer into landscaping plans, and larger circulation areas to maximize the library’s available book collection.

Library staff present at the meeting were vocal in expressing their desire for a new facility, and a representative of Will Campos also stated that he had received numerous phone calls in support of a new library.

Community members were directed to leave any additional written comments with the G + P representative.