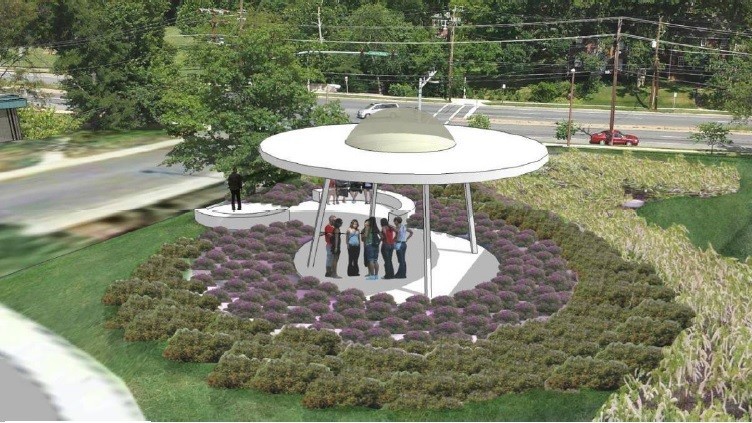 The proposed "Option C" for the new Hyattsville Library would move the saucer closer to Toledo Terrance and incorporate it into a green space garden.
Government

Approximately 50 people attended the final public input meeting on the new Hyattsville Library.  Residents from local municipalities, including Hyattsville, University Park, Mount Rainier, and Riverdale Park were present.  One attendee said she lived in Bowie, but used the Hyattsville Branch frequently.  The session drew residents who lived in the area for decades, as well as those who just moved into the neighborhood.

Based on feedback from previous public input meetings, Grimm + Parker president Melanie Hennigan spoke about the principles on which the design firm based the  new Hyattsville Library concept:

Hennigan said they were favoring tentative “Option C,” which puts the new building in an off-set center position on the property with more than 100 parking spaces below.  Due to the property slope, the plan for the parking garage would place it where the lower level administrative offices currently reside (not underground). This giving the garage lots of light and a breeze, said Hennigan.

At the last public meeting in August, residents expressed concern about the proposed reduction of the building size from 61,000 square feet to approximately 35,000 square feet.  Prince George’s County Memorial Library System Director Kathleen Teaze began the meeting Tuesday by talking about the library’s origins.  She said that there were few libraries in the County system when the Hyattsville Library opened in 1964.  It was intended to be a regional library at that time, but the significance of the building has changed.

Presently, the County’s library administrative offices exist at the Hyattsville Branch, which take up roughly half of the building’s space.  Library officials say those offices will move to Largo-Kettering.

At the July 2 Friends of the Hyattsville Branch meeting, PGCMLS West Area Manager Catherine Hollerbach commented one of the issues with the current building is having five service desks on two different floors.  Hennigan talked about the up and down tax dollars allocated to libraries.  She said staff gets reduced at times and it becomes harder to secure a multi-level building.

“If we can design something with excellent sight lines all on one level, then when it comes time to cut hours or cut staff, you may  not have to do that,” Hennigan said.

What would make this project a success for you?  Leave your comments in the new Hyattsville Library suggestion box.

Despite the design firm’s reassurances the collection size wouldn’t change much, several residents expressed concern about having room in the new building for all the proposed spaces and books.  At the September Friends of the Hyattsville Branch meeting, area manager Hollerbach explained that Prince George’s County has a “floating collection,” which means residents can check out a book at one branch, return it to a different branch, and the book then lives at the new branch.

Hennigan also commented that they were considering the digital assets a part of the total collection.

“It’s not right to call digital a part of the collection, because digital is in the air.  It’s not anything the library is collecting.” said one resident.   Hennigan explained that the younger generations were very comfortable using digital books from the library.

Another resident commented,  “I’m not sure why the library space isn’t larger.”  Someone else said, “This place is packed.  We need more space.”

The focus of G+P’s presentation was about the proposed green space for the new library.  Representatives from Bradley Site Design, who designed similar green spaces for other G+P projects, were on hand to talk about ideas for the new space.  Options include green roof systems, vegetative roofs, and different varieties of plants.  The building designers also talked about improving water efficiency inside and outside of the building, rain gardens, a bio-retention pond, and electric car charging stations. G+P said several libraries also have solar panels with displays that show how much energy is being collected and where that energy is being used.

Sharon Bradley of Bradley Site Design said they were looking to make the area around the new library a decorative landscape and a “multi-sensory experience.”

The preliminary sketch for “Option C” puts the iconic saucer feature close to Toledo Terrace and turns it into a part of garden-like green space.  Additionally, a reading terrace appeared on the sketch, which would overlook the saucer and green space.

“I think the reading terrace is a good idea,” said 8-year-old Quinlan Ross from Hyattsville.  Her older sister, Celeste, a fifth-grader at Hyattsville Elementary School, had no comment.

Rebecca Gitter, Vice President of the Friends of the Hyattsville Branch, said she’s happy to see more green space in the plan than at the August 2013 meeting.

“Save Our Saucer” spokesperson T. Carter Ross asked about LEED certification.  Hennigan said the building would be built to LEED standards, but the library system was not choosing to apply for LEED certification at this time.  She explained that it was something they could decide to do later, and several residents expressed support for the County pursuing the certification.

Hollerbach explained in reference to the August public input meeting that PGCMLS does not “file the LEED paperwork and go through the official LEED process because that is very expensive.”


“I like what I’m seeing here,” one resident said.  He also mentioned he’d like to see space big enough so that he, his wife, and four kids could come work together at the library.

Several members of the Friends of the Hyattsville Branch, including group President Elizabeth Pearson and other residents, said they wanted to make sure the new library had room for a bookstore.  Hennigan commented that the preliminary plan was to make it a part of the vending cafe so people could snack and browse.

When asked about the vending cafe, G+P representatives said the first manned cafe became too expensive to maintain.  They said that if it was not busy all of the time, it could not pay for itself.

When commenting about the proposed drive-through book drop-off, one local mom said, “The book drop would be awesome.  Now I make my kids get out of the car.”

One Hyattsville resident and mother of four children said she challenged G+P to go beyond American Disabilities Act standards and to “think out of the box” about how to help all residents have an independent experience at the new library.

There were a couple of comments about local art, one person referencing this being the Gateway Arts District.  Michael Gannon, chief operating officer of PGCMLS support services, said they are looking at incorporating local art into the new library.

Other comments included concern about those who walk getting to the temporary library depending on the location, making sure the bus stop are considered and riders could easily access the library, and making sure the new library has enough kid hiding and reflective spaces.

Gannon said the next step after Tuesday’s meeting would be to work with the architects to design the building.