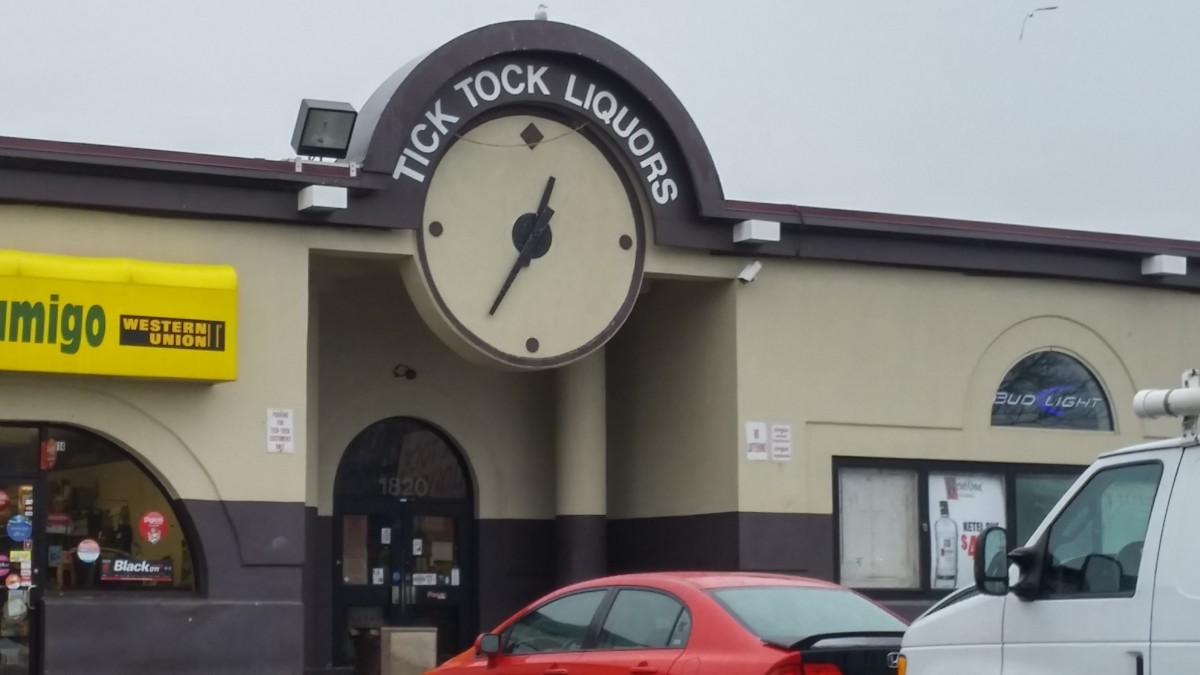 Updated to reflect that Lee’s Liquors at 2903 Hamilton Street sits across the street from another drive-through news stand that is not affiliated with this story.

BY REBECCA BENNETT — Local business owners Amrik and Ravinder Melhi received another setback this month when the Prince George’s County Board of License Commissioners revoked the liquor license of an Adelphi restaurant, The Golden Bull, which they allegedly control.  Last August, the board ordered their business, Tick Tock Liquors in Langley Park, to stop selling alcohol.

At Tick Tock, located at 1820 University Boulevard East, a handwritten sign on the door says, “We close,” even though the website still lists store hours as 7 a.m. to midnight.

The store has a sordid past. Tick Tock Liquors and owners Amrik and Ravinder Melhi were implicated in the 2010 indictment of former Prince George’s County Executive Jack Johnson, who pleaded guilty to accepting bribes from developers, conspiracy, and extortion. Johnson was sentenced to seven years in prison and is scheduled to be released in 2018.

Amrik Melhi admitted to conspiring with Johnson and a Prince George’s County Police officer to transport and distribute untaxed alcohol using extortion. In Dec. 2011, a U.S. District Court sentenced 52-year-old Melhi to 46 months in prison and three years of supervised release, the FBI said. He was released on March 18, 2014, according to the Federal Bureau of Prisons.

The FBI says Ravinder Melhi, 49, pled guilty to illegally accessing a protected Maryland Motor Vehicle Administration computer for commercial and personal gain. She was sentenced to 18 months probation and ordered to pay a fine of $25,000.

According to the 2010 federal indictment, the Melhis also own the building where Lee’s Liquor sits at 2903 Hamilton Street in West Hyattsville, which was highlighted as a target for forfeiture. A federal indictment alleged the properties were used to carry out illegal activity. The Hyattsville Patch reported in 2010 that Lee’s owner Ajay Sharma said the store was not involved.

Amrik Melhi took a plea deal and agreed to pay a fine of $975,327.32, court records show. In the Sept. 2011 forfeiture consent order, the government required none of the personal properties, business properties or cars listed in the indictment be turned over. That meant Tick Tock Liquors and Hyattsville tenant Lee’s Liquors could continue operating at their current locations.

Despite being caught up in a major felony indictment, the Melhi’s and Tick Tock Liquors are still having trouble staying on the straight and narrow.

Court records show that an investigator for the Comptroller of Maryland filed an incident report in Aug. 2013 alleging Tick Tock Liquors purchased nearly 4,000 bottles of contraband beer from an unlicensed wholesaler.

According to notes from the Jan. 8, 2014 Board of the License Commissioner’s hearing, Tick Tock Liquors was found responsible for “unlawfully purchasing or keeping alcoholic beverages on a licensed premises which were purchased from other than a duly licensed manufacturer or wholesaler …” The establishment was fined $5,000 and its license suspended for 10 days.

The license commissioners asked that Tick Tock Liquors show cause for two incidents in March 2014 at the establishment. On March 8, according to a Prince George’s County Police report, officers responded to a stabbing just outside of the restaurant and store. The board fined Tick Tock $5,000 and imposed a 30 day suspension on its liquor license.

The board stated, “The bartender, who served in that position for a number of years never received the formal training in alcoholic beverage service which is so necessary to enable service personnel to recognize the signs of intoxication and prevent over service.”

On March 23, according to Prince George’s County Police, a customer unscrewed a foot-long beer tap handle and struck another customer over the head several times. The board fined Tick Tock Liquors $12,500.

According to the license commissioners, “The staff of the licensee did not summon medical assistance for a customer who was injured so seriously that he was transported to the hospital by medical personnel when they were finally summoned by the police.”

“Police resources are unduly taxed by the operation of the premises. The situation is intolerable and clearly a danger to the community,” license commissioner notes say, citing that the board found approximately 20 percent of recent calls to police in the area involved Tick Tock Liquors. … The board concludes that the operation of the premises causes a danger to the peace and good order of the community …”

In Aug. 2014, the board held a special session to recommend Tick Tock’s liquor license not be renewed. The license commissioners alleged that even though Ravinder Melhi could no longer hold a liquor license after being convicted of a felony, and that she had technically sold her share to other people, she was still controlling the liquor licenses at Tick Tock Liquors and at Golden Bull, a restaurant located near Adelphi Road and Riggs Road.

“Although Mrs. Melhi holds herself out to be a mere salaried employee of the company, she continues to exercise operational control over the business and to represent the business in any number of critical areas,” says notes from the Aug. 6 Board of License Commissioners meeting.

Ravinder Melhi’s daughter is a stockholder at Golden Bull, according to the license commissioners. “The board finds that these two licensed premises are operated under one management umbrella,” board notes state.

Court documents filed on behalf of Tick Tock Liquors stated, “Mrs. Melhi worked unrelentingly and ceaselessly to maintain and grow the Tick Tock business in order to provide the kind of financial legacy for her three children that her own parents could never have dreamed of providing to her.” Tick Tock Liquors grossed revenues of $7.4 million in 2012, according to its lawyer.

In response, court documents filed by the Board of License Commissioners state, “the board’s decision does not cut off all sources of revenue to the petitioner. It does not prevent the petitioner from … providing meals to patrons without the service of alcoholic beverages.”

Golden Bull, the other liquor license the board alleges Ravinder Melhi controls, has had its fair share of problems this year, including the alleged operation of a separate liquor store when they were only authorized to sell alcohol in a restaurant. According to Dec. 17 findings of fact and conclusions, the license commissioners also decided to revoke that license effective Jan. 9, 2015.

Leyden, who is also representing Golden Bull, has already filed a request for judicial review with the circuit court. He said it is not an accurate characterisation in reference to Mrs. Melhi controlling both liquor licenses.

Even though Leyden filed the relevant paperwork for Tick Tock Liquors, he said the primary counsel is Tim Maloney with law firm Joseph Greenwald and Laake. The Hyattsville Life & Times reached out to Maloney’s office and is awaiting a comment.

Green Owl, developer team up to add color, ‘create a sense of place’ on Route 1