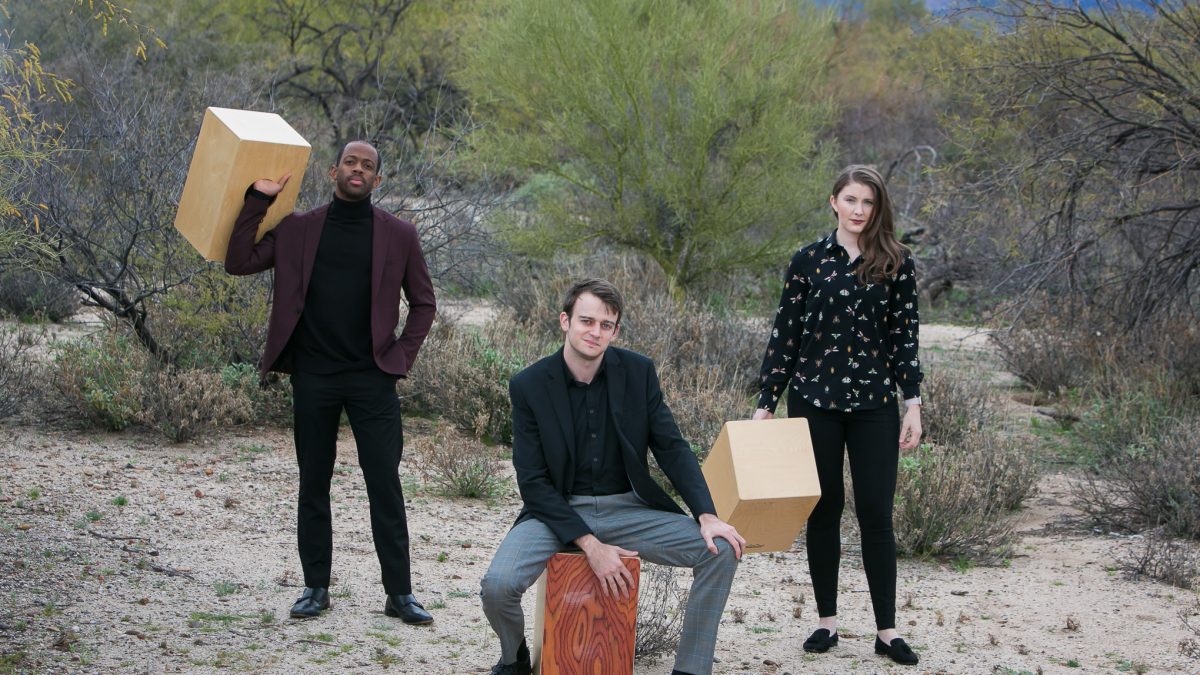 The Lineage Percussion trio used innovative instrumental techniques to depict the Lakeland community’s vibrant history in a Feb. 19 performance which was part of the NextLOOK Series, sponsored by The Clarice Smith Performing Arts Center at the University of Maryland.

Each piece represented a different era of Lakeland’s history and featured snippets of oral histories of the Lakeland Community Heritage Project’s members.

“The Color of Love,” composed by Sumpter, began with the sound of train whistles and segued into rolling bass drums, depicting life for Black Americans in Lakeland during segregation.

“The goal of this piece is not to dwell on the collective struggles of people like those in the Lakeland community during this time, but to shed a bright light on the resiliency, resourcefulness and restorative actions that were performed then and now to keep the spirit of Lakeland and its people alive,” Sumpter wrote in the event program.

The second piece, “ebb + flood,” innovatively used tubs of water to simulate the sounds of both calm ripples and violent rainstorms. The Lakeland community was especially prone to flooding issues, and composer Lauren Floyd sought to represent the build-up to flooding chaos from Hurricane Agnes.

“It also exemplifies the fascinating dichotomy of water, with its ability to destroy and to also heal,” Floyd wrote.

“Urban Renewal,” the third piece, began with rhythmic construction noises created by tapping and scratching coins on round metal plates. The Lakeland Urban Renewal Plan, approved by the City of College Park in 1970, famously devastated the community by destroying many existing family homes and replacing them with subsidized and high-density housing, under the guise of flood remediation for the area.

The piece included three distinct sections: “Funding and Negotiation,” “Construction and Betrayal,” and “Prayers and Resilience.” Each section aimed to depict a phase of the Urban Renewal Plan, highlighting the community’s hope for revitalization.

“The piece concludes with contemplative timbres, looking ahead to the future of Lakeland amidst the devastation of the Urban Renewal Plan and hoping for a brighter future,” wrote composer and percussionist Trevor Barroero.

“Take it. Take it,” the performers angrily chanted. “Take everything.”

At the conclusion of the performance, the trio spoke with the audience about their compositions. They noted that Lakeland’s story is one that is echoed in many other communities around the country.

“We hope the community is very proud of what we put together today,” Floyd said.

Maxine Gross, president of the Lakeland Community Heritage Project, also offered comments at the end of the program. Gross had given the trio access to residents’ oral histories, which they used throughout the performance.

“I had no idea what you were going to do,” Gross said. “But I couldn’t be more thrilled.”

This event comes in the midst of serious restorative justice efforts between the mayor and city council, and members of the Lakeland community.

On Feb. 9, the College Park City Council unanimously approved the establishment of a Restorative Justice Steering Committee to develop the framework for a full commission. The steering committee will make recommendations concerning the work, goals and timeline for the commission.

Committee members will include former and current Lakelanders, and other city residents, councilmembers, and at least one individual who is familiar with the restorative justice process, according to interim City Manager Bill Gardiner.

Gross pointed out that if restorative justice is to be successful, Lakelanders need to be able to claim and tell their story, and the community as a whole needs to hear and honor that story.

“If this is to be a true healing process and a restorative process, it has to be something that folks know about, and folks travel on that journey together,” she said.

The city council is searching for members to serve on the Restorative Justice Steering Committee. If you are interested, contact citymanager@collegeparkmd.gov or call 240.487.3501.

Video monitoring back in the budget