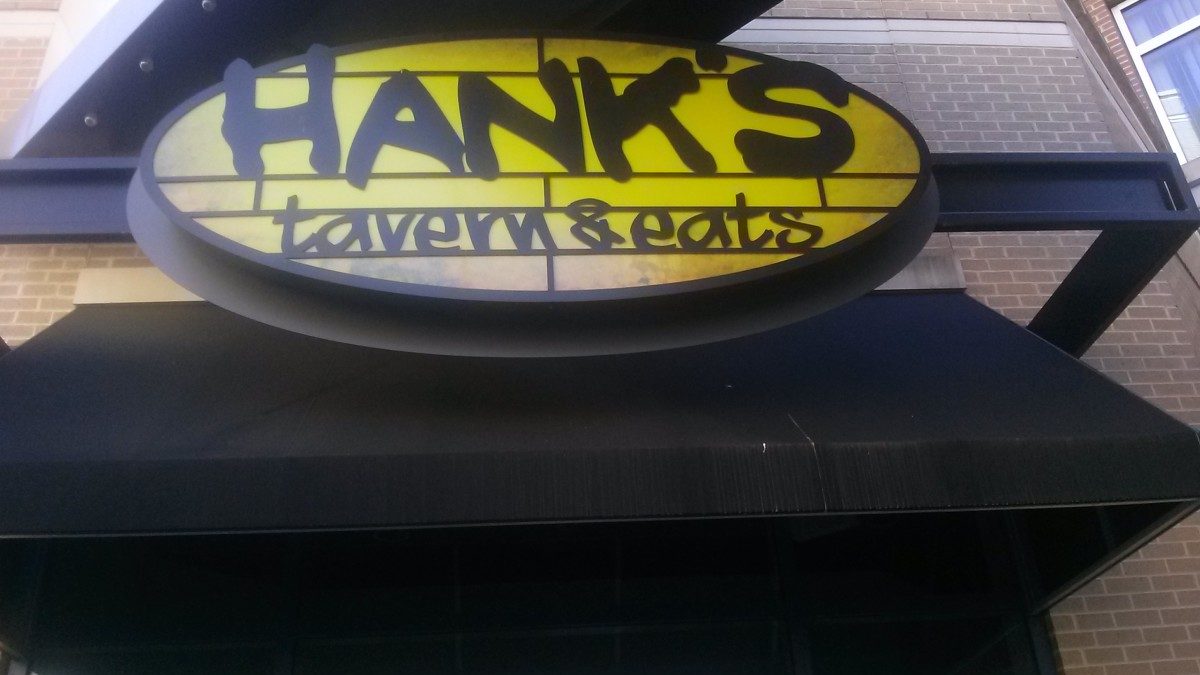 BY MAX JAMES BENNETT AND ROSANNA LANDIS WEAVER — Hank’s Tavern & Eats, one of the longest term businesses of University Town Center, will close this month after nearly five-and-a-half years of dishing up traditional American fare at its America Boulevard location.  Unlike the other closings in the troubled development, this one seems to have a replacement on deck: South Korean fried-chicken franchise Bon Chon.

Easter Sunday, April 20, will be the last opportunity for diners to enjoy the classic menu at the restaurant that was a last-minute replacement. As the Town Center complex was about to open in 2008, World of Wings — which had been slated for the location —  backed out of its planned restaurant, leaving the space next to Regal Cinema empty.

Regal Cinema has a deal with the University Town Center Development Group that stipulated it have restaurants on either side.

When World of Wings backed out of the contract, developers looked to local restaurateur Geoffrey Tracy, who through Chef Geoff Universal, owns and operates several restaurants in the Washington, D.C. area.

Under the management agreement, said Tracy, he was not the owner at Hank’s. “This was the first time I ran a restaurant without having my name on the lease,” he added.

In order to bring the restaurant in at the last minute, says Hyattsville Community Development Executive Director Stuart Eisenberg, “my understanding was that they had a very advantageous deal.”

That deal allowed the restaurant to stay in business longer than many others in the complex that have closed in a recessionary environment. University Town Center Development lost most of its holdings to bankruptcy; what’s left is, in Eisenberg’s words, is “a very restructured creature.”

Geoff Tracy notes that the situation “wasn’t sustainable because we were not a profitable restaurant. But we still provided value for the landlords” by allowing them to keep the terms of the Regal Cinema deal.

Executives with Foulger-Pratt, the management company for current owner Wells Fargo, did not return several calls for comment.

When HL&T spoke to him, Manager Steve Greehan said he did not know what the plans were for the location. “We don’t know if they’re gutting the place and going to be closed for six months or whether they are going to walk in the next day and try to go from there.”

He had heard a rumor, since proved true, that a Korean restaurant would take its place. An application has been filed with the Prince George’s County Board of License Commissioners to transfer Hank’s liquor license at the May 27 hearing of the commission.

The first Bon Chon opened in South Korea in 2002, using a traditional method of double-frying chicken that renders out the fat, making it less greasy, and serving it with spicy dipping sauces.  Today, according to the website, there are 70 restaurants overseas and 30 in the United States, including well-reviewed franchises in Rockville and Arlington.

Little information beyond what is on the application is available regarding the owners, a group called Affluent MD, Inc, other than the names of its principals: Jing Sheg Huang, Mark Wang, and Xuan Huang-Fu.

Greehan reports that when they close the restaurant they’ve been instructed to leave behind any unopened foodstuffs. “It’s very unusual that we’re going to leave behind stuff,” he said. “Bottles of ketchup, sugar packets, it’s all owned by the Town Center and they have people coming in.”

For Greehan, and the six staff members who have been at the restaurant since it opened, the closing will also mean leaving behind great memories and hopes for the future. Greehan notes that some employees moved up from busboys to bartenders. “That’s what you hope for. A lot of times you have to leave to achieve that.”

Bartender Starr Jefferson describes Hank’s as a “great little spot for American food.” Jefferson, who has two other jobs, is hoping to find another location to bartend.  “It’s really about finding the right place where you can be happy.”

For her, and many of the customers, Hank’s was that place.

Hyattsville resident Sol Kwon was a big fan of Hank’s and sorry to hear it was closing, but thrilled to hear the Bon Chon was coming. She is a fan of that restaurant too, and has driven to to Annandale for the fried chicken.

“That will be a plus for Hyattsville,” she says, “But I wish they could both exist.”

While Tracy, who ran the restaurant with his brother Chris Tracy, is sad to see Hank’s leave, he adds, “I’m happy there’s a new tenant. It’s a great community and a great neighborhood.” He hopes that with the planned expansion of the property (Safeway and Petco are coming in) the center can achieve the vibrancy needed to sustain a restaurant at that location.