Created by contributors in grades K-12, the HyattsKIDS Life & Times features local news, columns, and comics from our city’s youngest journalists. Would you like to see your art or writing on our page? Send submissions to hyattskids@hyattsvillelife.com. 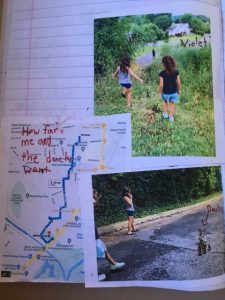 On June 22, a family of ducks was heading toward a storm drain near my house. I herded them away, but they headed for the other sidewalk. So I did too. Unfortunately, they headed for the other storm drain. Extra unfortunately, five chicks fell down into the drain — but a handyman, at that moment, came to a halt. I told him what happened, and he went home to get a net. Meanwhile, the chicks were chirping like crazy.

Eventually, we got them all out. It was time to decide what to do with them. After getting them into a yard with a fence, we decided to herd them to the nearest body of water.

We had to direct traffic when we crossed one busy street. The ducks went in one yard, then we went down a hill and down a dead end and found a creek and got them in it! “We got them safely past 10 blocks, and we got them to cross roads that had racing cars,” said Violet. “I felt happy and relieved when they got to the safe river.”

When Clara found the duck family in an unsafe location, we did not want to cause more stress to the mama duck and her ducklings, and we knew animal rescue people would not be able to show up at the scene immediately. So we collectively decided the safest way to achieve our goal was to herd the family to the levee, some 10 zig-zag blocks away through traffic. Mama Duck was not going to follow us the way her ducklings dutifully followed her, so we had to carefully walk behind her to steer her as she was trying to avoid us. When they left our yard, Mama duck flitted off a 3-foot retaining wall, and her little babies eagerly tumbled down the drop behind her, not missing a beat. It was amazing how strong their little legs were, scampering up and down curbs dozens of times with little difficulty.

Along the way, she tended to dart off into people’s yards which posed another danger; we didn’t want to trespass, and there was thick brush and fencing in some of the yards that would make it difficult for us to get them out if they hid back there. We were delighted to pass by David Driskell’s wife and her grandchildren, who enjoyed the duck parade from their front stoop.

It was a stressful and exhilarating journey. Crittenden Street is super busy, so we stopped traffic so the duck family could cross. Everybody was very accommodating. A bus driver slowed down and cooed at the sight.

Somehow, we gathered the duck family to our endpoint, the Melrose Park Rain Garden that descends down a hill toward the Northwest Branch levee, where we knew water would be waiting. The kids were a little concerned about the ducklings’ ability to navigate the tall grasses, but they did so with ease. It was an exhilarating moment to see Mama Duck ease into the water alongside the trail and immediately take a drink. Her ducklings followed her, and they soon floated into the creek, hidden from sight by low hanging branches. They were totally silent back there, safe at last. 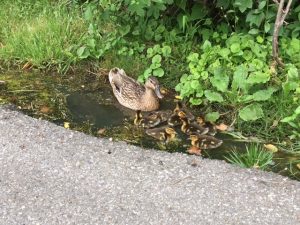 On the way back, we were able to deliver the good news to Ms. Driskell, and she said, “That’s wonderful; I haven’t seen anything that enjoyable in a long time!” Retracing our steps back home, we could not believe the territory we covered. Going back to read the concerned comments on the HOPE listserv reminded us that the whole neighborhood was hoping for a happy ending to this story, and we felt fortunate to be in the right place at the right time to help.

The Hyattsville Branch Library is hosting the annual PGCMLS Summer Reading program again. It started in the first week of June and is at the halfway point. Kids and adults can still go to the library and sign up to get prizes for borrowing books, going to library events, or reading for just 30 minutes a day. If you complete your stamp card, you can get tickets to baseball games and enter the raffle to win gift cards.

A good strategy for summer reading is to start a book series. I recommend the Percy Jackson and the Olympians books by Rick Riordan, A Series of Unfortunate Events by Lemony Snicket, or the funny series I found, Wayside School by Louis Sachar. The first book is titled Sideways Stories From Wayside School and is about the students in one class. Each chapter is about one of the student’s adventures during one day of school. Crazy and funny things happen to everyone, even the teachers and staff. They have to solve problems in creative ways. My favorite character is a boy named Sammy who has a secret, but I don’t want to spoil it for you — you have to read it for yourself!

I think the Wayside School series is a fun way for kids to start their summer reading. There are four books in the series, and they are all funny. Get to the Hyattsville library and start reading today!