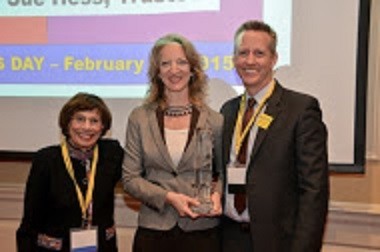 BY RYAN CARBO — For 20 years, the Mount Rainier-based Joe’s Movement Emporium, an arts-focused nonprofit, has operated with the mantra that there should be no barrier to participate in the multicultural art of dance. And during this anniversary, there is much to celebrate.

Dance artist Brooke Kidd, who co-founded Joe’s with Ajax Joe Drayton, said the idea for the nonprofit began when she and her fellow American University graduates needed a space to perform. Kidd drew inspiration from the open nature of the arts culture in Cameroon, where she had previously spent time.

“Soon after opening, many people came to use our space or do different programs, and we started adding to our collective of artists. Within a couple months, we saw a need for an after-school program, and we started that,” Kidd said. “Everything built momentum through the years, and we worked to be responsive to what our community requested and was interested in having.”

As one of the few arts-focused spaces in the suburbs of D.C., Joe’s became a place where artists could perform and showcase their work, and where community members could take part in a variety of programs, especially movement and dance classes.

According to Joe’s director of development, Melissa Rosenberg, the center also works with local businesses in the area to bring the arts to unexpected places, like a laundromat and beauty shop, turning the Route 1 corridor into what Rosenberg calls the “arts corridor.”

Joe’s was one of seven partners receiving a quarter million dollar grant, and acted as the fiscal agent, creating murals, choreographing performances, and reimagining public spaces with creative placemaking to beautify the community and stimulate the economy, Rosenberg said.

In addition to the 20th anniversary, Joe’s is celebrating Kidd’s acceptance of the Sue Hess Arts Advocate of the Year Award from the Maryland Citizens for the Arts. The organization honored Kidd for her commitment to civic progress in the arts world, as well as her public support for the arts.

“Joe’s has been a place for access to the creative process,”  Kidd said at the 2015 Maryland Arts Day when receiving her award. She explained that many adults in the area felt they lacked access to the arts as children. “I wanted to change that dialogue of culture and education and [show] why the arts are such a vital tool.”

“Movement education is a powerful tool for personal transformation,” Kidd said. “I have seen so many examples of people getting into their body and finding greater balance in their life because they can express through their whole person.”

For Kidd and the rest of the Joe’s team, dance is not only about art and expression, but also holistic health for the mind, body, and spirit. Offerings include programs like yoga and capoeira – a Brazilian martial arts that incorporates elements of dance – as well as subsidized healthy snacks and meals for low income children and teenagers in the nonprofit’s summer and after school programs.

Another goal is to use the arts to encourage economic growth in the area: the nonprofit often invites local health food and other health-focused vendors to get involved.

The center plans to celebrate this milestone with a gala on March 21 and events through October including performances, live music, and Joe’s own specialty: dancing.

Paint Branch Golfers Fight to Save Their Course