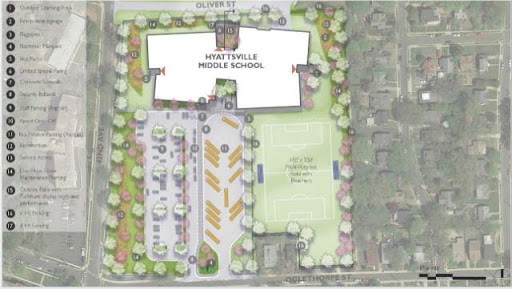 At the Dec. 21, 2020 city council meeting, the council voted unanimously to approve limitations on the escalation of fines for unpaid parking tickets. Previously, an unpaid fine doubled after 15 days and again after 30 days. The motion restricts the maximum fine to 150% of the original fine.

Mayor Candace Hollingsworth, who submitted the motion, acknowledged the potential loss of revenues from parking tickets. “It may pinch a little bit in the pockets, but at the end of the day, it’s helping [those who need it most],” she said, emphasizing the minimal initial cost of Hyattsville’s parking, which is currently $0.50/hour, compared to the potential cost of an unpaid ticket.

A city staff memo stated that the new fee schedule was anticipated to “result in a citation gross revenue reduction of 25% – 30% or $133.500 – $160.200 annually.” The memo noted that a reduction in revenue could require the parking program to be supplemented by the city’s general fund, cut parking program operations, raise parking rates in city lots or assess fees for the Residential Parking Program.

During the Dec. 8, 2020 Hyattsville Middle School Parent Teacher Student Organization meeting, participants were introduced to additional information about the plans to build a new middle school. The new school will be built using alternative construction financing, also referred to as a public-private partnership, in which developers would partner with Prince George’s County Public Schools (PGCPS) to build and maintain new school buildings, in exchange for regular payments. This is a new financing model that has been controversial, due to concerns about developer reliability and potentially higher costs.

The new building will be located on the same parcel of land as the current building, on the north side of the lot where the sports fields are now, backing up to Oliver Street. Multipurpose fields will be built on the south side of the lot along Oglethorpe. The school will be four stories high, with an additional outdoor learning area, and will accommodate up to 1,200 students. 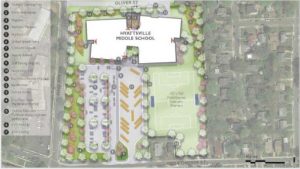 At the Jan. 4 city council meeting, Michael Ricketts from Gilbane Development Corporation, one of the companies involved in the partnership, said that the current middle school building would likely be demolished midway through 2021. Councilmembers’ questions focused on stormwater management and sediment control, especially given recent problems with flooding and runoff from other area construction sites. “The worst thing in the world for us is to have a problem. … With our tight timeframe, we don’t really have … the opportunity for those types of mistakes,” said Ricketts. “You can hold me to task on it.”

Ricketts also noted that Oliver Street would be widened to better accommodate traffic flow. Jason Washington explained that plans for the school include a community health clinic with its own separate access, and that other community facilities may be added later in the design process depending on the community’s needs.

Despite initial assurances that students would not need to be educated off site, the PGCPS plan calls for students to be bussed to Meadowbrook in Bowie and Robert Goddard Montessori School in Seabrook for the 2021/22 and 2022/23 school years. Further details, including how the student body is to be split, will be announced in a town hall in the spring of 2021.

A PGCPS town hall is scheduled for Jan. 12 at 7 p.m. The new Hyattsville Middle School is slated to open for the start of the 2023 school year.

At the Jan. 4 city council meeting, the council discussed the detailed site plan for a proposed new restaurant along Baltimore Avenue. Federalist Pig, an American barbecue restaurant with a first location in Adams Morgan, plans to open a second location at 5504 Baltimore Avenue, where a car parts and tire repair store once stood.

The restaurant plans to retain the existing facade, while expanding the building. It will include indoor and outdoor seating, as well as outdoor games like cornhole. The applicant requested a few variances, such as allowing vehicle access from Route 1, rather than from the rear street, which city staff recommended that the council support. For the requested variance to have 15 parking spaces rather than the 30 typically required for the size of the restaurant, staff recommended a condition that the applicant provide parking reduction mitigation strategies like employee incentives for public transportation or the installation of bike racks.

City staff also recommended that Federalist Pig consider Black artists for a proposed mural on the side of the building, and prioritize local individuals in the hiring process. The application will come back to the city council for a vote on Jan. 19, and likely go before the Prince George’s County Planning Board in late January or early February.

Nature Nearby: Dinner from the basement

Streetcar Suburbs Publishing, 2 years ago 3 min read
From the Editor

From the Editor: Hello to Hyattsville