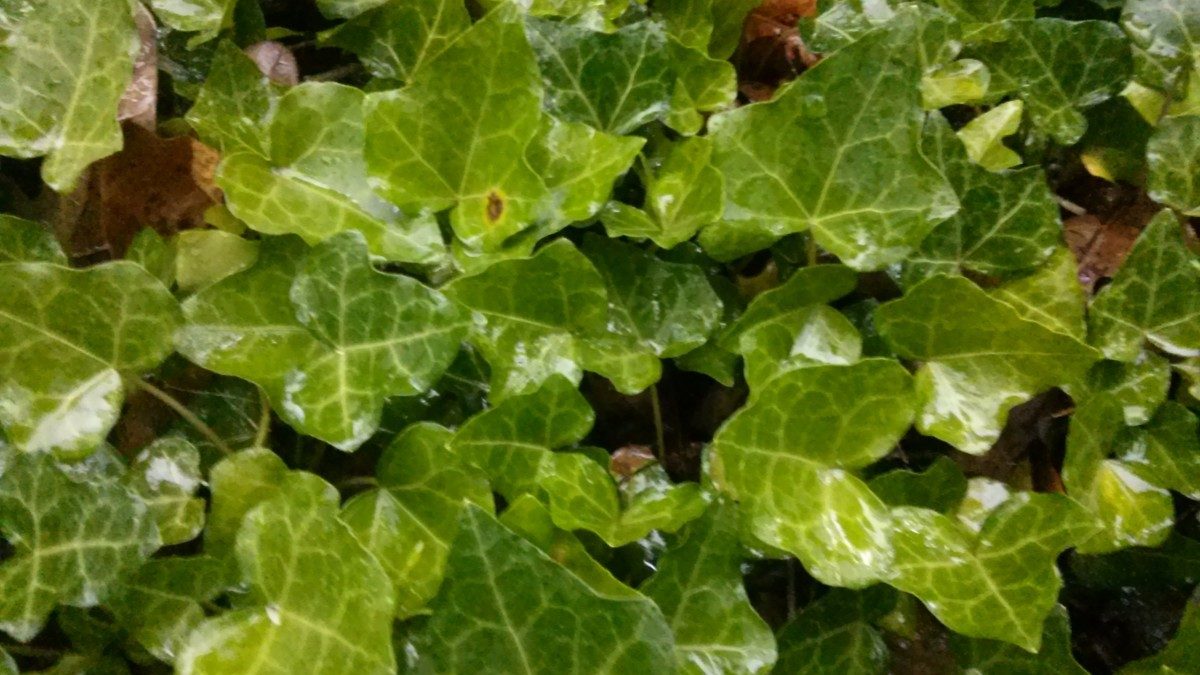 I’ve lived in the same house since childhood and the pin oak in the front yard was quite old when my family and I moved in.  It died a couple of years ago, and since then there has been dampness in the basement for the first time. I think it may have something to do with the absence of the oak, which probably soaked up a lot of moisture.  I don’t want to plant another oak because it would take years for it to grow to a comparable size.  A friend suggested a weeping willow because they grow very quickly and like plenty of moisture, but he added that I’d have to put copper sulfate in the septic system to keep the willow’s roots out of it. He also suggested foundation plantings now that there is less shade, although I think the wide eaves of the house still make it too shady for anything other than the English ivy already there.

What do you think? Are there alternatives?

My ears are ringing with alarm bells. Before re-planting any tree, remove all the ivy. (I can’t help wondering if this invasive and destructive vine was also allowed to grow up the oak, in which case it may have helped kill it.) Then inspect the foundation for damage caused by the ivy’s fibrous root system.  Cracks would of course allow moisture into your basement. Check also the slope of the ground around the foundation of your home to make sure it slopes away rather than toward it. You might even want to have your downspouts checked, and perhaps extended.

I love weeping willows, but please don’t plant one within 100 feet of your house —  or anyone else’s. I don’t know of any chemical that would be effective enough in keeping the willow roots under control if the tree is closer to the house than that. Also, while willows grow quickly, they also decline quickly; their lifespan is 20 to 30 years at most. Unfortunately, high-water take-up trees generally have invasive roots. Certainly avoid poplars, alders and cherries.

If you absolutely crave a large, fast-growing, moisture-loving tree, the least dangerous is probably our own native river birch. If you like the graceful “weeping” habit and can accept a smaller tree, there are plenty of lovely choices. There is Crimson Queen Japanese maple; Acoma crape myrtle, which has white flowers; Andean Gold saw-toothed azara.  Among native trees, there is the weeping redbud, a number of weeping birches, and the weeping white pine. This last is about the only pine I would dare recommend because it only grows to 15 feet tall. Larger pines are notorious for falling on houses.

However, you might want to concentrate on foundation plantings. My ground-cover expert, Liatris Da Vinca, asks you to consider lilies-of-the-valley, which she says now come with variegated foliage or pink flowers, violets or periwinkles. These do well with either moist or dry conditions, in sun or shade, and the roots would keep to themselves. Good shrubs would be rhododendrons or azaleas, both of which are shallow-rooted and can tolerate shade.

Hydrangeas are another option, but although they are beautiful in summer I don’t think they are attractive in winter. If winter beauty matters to you, you might consider holly and dwarf evergreens. One advantage of putting in such plantings is that you would have to dig up and improve your soil, which would improve drainage in itself.

To discuss this and other gardening topics, please come to the next meeting of the Hyattsville Horticultural Society on June 21 at 10 a.m. We will meet at the home of Marsha and Jeff Moulton at 6122 42nd Avenue.

Hyattsville Life and Times, 3 years ago 5 min read
From the Editor

From the Editor: Professionalizing parenthood

Hyattsville Life and Times, 8 years ago 4 min read
Nature Nearby

Hyattsville Life and Times, 9 years ago 4 min read
Nature Nearby

Nature Nearby: Avian attention-getters in our city