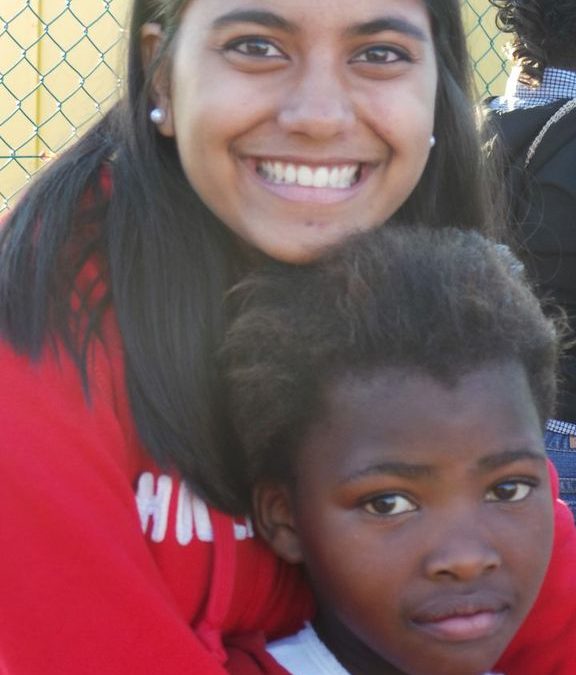 “It Was A Miracle”

BY SHARADA WEAVER — “It was a miracle,” were the four words on the lips of many Northwestern High School students after learning late this spring that enough money had been raised for choir members to perform in South Africa in July. Many of us had never been out of the country, or even on an airplane.  This journey will be remembered in the hearts of current students, parents, teachers, families, friends, and alumni.

When our choir director, Leona Lowery Fitzhugh, applied to the Ilhombe Music Festival over two years ago, no one really expected to go. Even after we learned we’d been accepted, many hurdles loomed before us – the biggest of which was the cost. The trip would consist of 10 days visiting and performing at some of the country’s most historic sites. As many of you know, all of us went through more than our fair share of fundraisers to make this trip possible.

But on July 10, when we stepped into Dulles International Airport, it hit us all: It was really happening! As we were driving for the first time from Johannesburg to Pretoria, in a tour bus with the steering wheel on the opposite side, it was riveting to see how everything seemed so similar but somehow so different.

It was truly amazing to have the privilege to sing outside the Pretoria hospital where Nelson Mandela, or “Tata Madiba” as South Africans call him, was staying. There were crowds gathered around, cameras and signs everywhere, and letters strung up on the fence from well-wishers of all ages, reflecting the reverence the people have for Tata Madiba. The ambiance made performing there even more emotional for us.

Visiting Freedom Park was another awe-inspiring experience. Seeing the beauty of the place, hearing the stories, reading the quotes and seeing the list of people that were killed during the struggle against apartheid filled our minds with even more emotions. It was one of many things on our journey that helped us see how lucky we are, even if we don’t always feel it.

We certainly felt lucky to be performing in the music festival, with participants from all over the world singing their national anthems. Among the groups we met and had the privilege to sing with were the Toronto Children’s Chorus, New York’s New Amsterdam Singers, choirs from Australia, Trinidad and many South African choirs. It was so neat hearing music coming from people of different nationalities with unique voices. That will always be a memorable part of this trip.

Our sightseeing gave us many memories, too. We visited the Hector Pieterson Memorial and Museum. Hector was a 13-year-old who was killed by police in 1976 during a protest against Afrikaans. Outside the museum were rows of tables of beaded animals, jewelry, paintings, clothing and bags, with young men trying to sell them to us. It was very hard trying to bargain with them, especially when they called us “brothah,” and “sistah.” One told me, “I’ve been waiting for you, my sistah!” – making it even harder to resist the urge to buy too much. The attention made us feel honored, but sorry for them. Throughout the trip, the South Africans made us feel at home

A different type of memorial we visited was the Amy Biehl School, named for a 26-year-old Caucasian-American who was killed in 1993 by four Cape Town natives. A Fulbright Scholar, she had been working in South Africa to end apartheid. Her parents launched the Amy Biehl Foundation Trust to dissuade others from violence.

The trip there brought a spectrum of smiles for us and for the children we met. In one classroom, the little preschoolers sang to us, and we taught  them “If You’re Happy And You Know It.”  Then, as a group, we sang the well-known South African song “Shosholoza” and the country’s national anthem. It warmed my heart to meet a sweet little girl who wouldn’t let go of my hand and who felt comfortable in my arms, even though I was a stranger to her.

We met more children in Soweto, where the heartbreaking shantytowns made a lasting impression on us. This time really made us grateful for what we have. Many people there do not have electricity (although shops and restaurants do) and some people use car batteries for cooking. It opened up for us ideas and ways of living that we may have never known. The children of Soweto made me feel special, and it felt important to be there to hug them. As we were leaving, we gathered water bottles and extra money and gave them to the kids.

But we also got to experience the beauty of South Africa. We went up Table Mountain mountain on an aerial cableway that rotates so you can get a good look at everything .. and WOW! The view was picture perfect. The day we were at Table, we had the right artsy dimness sitting on the sunshine, fogginess coming in like a storm cloud in the distance, water shimmering like silk cloth, and buildings in perfect contours and silhouettes standing tall. It was unreal.

And staying in the Heia Safari Game Reserve was fascinating. Waking up to a giraffe outside our “hutel,” as my friend and I called it, was eye-out-of-socket shocking! The view was so surreal it could have been a painting. We saw mountains way out in the distance, the serene waterfall and lake, and, wandering around the preserve, zebras, antelopes and zonkies (animals that are a cross between a zebra and a donkey). Yep, it was Africa.

Having all our meals at the Heia camp brought us closer together as a community. And throughout the trip, we were thinking of the wonderful and generous supporters back at home and all around the world who had made this trip possible. They were with us in spirit as we toured around the sites in South Africa, sang our hearts out in concerts, and came together as a choir family. We will remember them as one of the most important parts of our journey.

I’m so happy this dream became a reality, especially for our choir director, Ms. Leona Lowery. She has a gift for making our choir stand out as a unique and beautiful choir.

Another high point was during our five concerts, and while we loved the heartfelt standing ovations, the best part was when everyone got up and started dancing and singing along. The songs, “Shosholoza,” “Nkosi Sikelel’ iAfrika,” and “Total Praise,” were the three well-known songs that got everyone up on their feet. It’s Africa, and so singing, dancing, and music in general, is a way of bringing people closer together and feeling adoration towards each and every person.

Sharada Weaver is a rising sophomore at Northwestern High School.