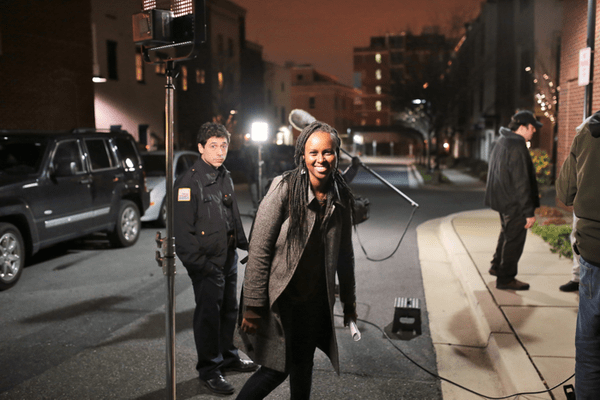 BY JACKITA D. BASS — With controversial films such as the Interview and Selma in the news, the short film All is Calm has its controversial bases in Hyattsville.  All is Calm was filmed in the Arts District in five hours on a cold Sunday night in December.  A Christmas card of sorts, the seven-minute film has themes straight out of the nation’s headlines—racial profiling and police and community relations but the underlying message is that there is good in all of us.

Francis Abbey, a DeMatha Catholic High School and University of Maryland graduate, wrote the script in less than seven hours and filmed the short story in even less time.  Usually producing short romantic comedies as holiday “cards” for his fans, Abbey said he was moved by recent events like the civil unrest in Ferguson and the picture of an Oregon police officer receiving an embrace from a 12-year-old boy carrying a free hug sign.  Abbey said he wanted to show that good people far outweigh the bad people and share a plea for calm.

Abbey plans to enter the short film into competitions giving Hyattsville and the Arts District greater exposure in the movie world.

Excited and happy about the ongoing development in the Arts District,, Abbey said,  “I hope that Hyattsville Arts District can cultivate a vibrant community for filmmakers and that homeowners and business owners will open their doors as shooting locations.”

“It would be awesome to open a film studio in the Arts District,” he said.

The filmmaker mentioned that he would love to see the Arcade building  at 4318 Gallatin Street turned into an independent theater where up and coming filmmakers can display their work.

All Is Calm from Francis Manuel Abbey on Vimeo.

Auntie Diluviana: Volunteers sign on to Aging in Place