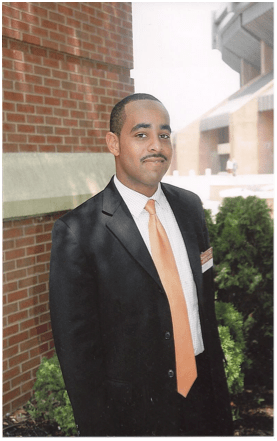 The City of Hyattsville recently lost a great employee, Tony Brown. At the request of his family and in his memory, the city and the Hyattsville Life & Times share here his obituary.

Tony Lee-Edward Brown Jr., the eldest child of Tony Lee-Brown Sr., and Ronia Delphina Collins-Brown was born May 24th 1988. Tony received his Maryland High School Diploma at Bowie High School. He continued his education at TESST College where he received his Electrical Technician Certification. He was employed by the Department of Public Works in the city of Hyattsville Maryland, where he received his Commercial Driver License (CDL).

Tony was baptized as one of Jehovah Witnesses on March 6, 2010. His love for Jehovah was evidence in the way he treated others. Tony always strived to do as much as he could in his service to Jehovah.

Family was very important to Tony, and he was very protective of them. Everyone who came in contact with him knew that his life centered around the love he had for his family and the special bond he shared with each and every one of them.

Tony also dearly loved his friends. His larger than life personality drew so many people to him. His passion, genuine spirit, beautiful smile, and contagious laughter were his trademarks. Tony was known for brightening any room he stepped foot in, and bringing joy to all those around him.

Tony made everyone around him feel good; he was always there to help and encourage. That’s the Tony we all know and will remember. Tony was the helper, the giver, and the enjoyer of an occasional “Ice Cold Brew.”

Tony was preceded in death by one of his best friends, his grandfather Phillip Collins Jr., and an Aunt he loved dearly, Carolyn Neal.