What ward are you in, and why does it matter? That’s the question currently facing Hyattsville’s resident-led redistricting commission to ensure that the city’s wards — or voting districts — are roughly the same size following the 2020 census results.

“It’s really about the 10 people who represent residents on the city council, and that’s basically it,” said commission recorder T. Carter Ross during a Sept. 19 presentation to the Hyattsville City Council.

Ross (who is on the board of the Hyattsville Life and Times’ publisher, Streetcar Suburbs News Inc.) and other commission members emphasized in the meeting, despite some public misconceptions to the contrary, that redistricting in Hyattsville does not impact voting for county or state representatives, nor does it affect school districts.

By law, municipalities must redraw their voting district maps every 10 years to reflect federal census data and account for uneven population growth. To form Hyattsville’s commission, the city solicited volunteers from the public and other committees, with an emphasis on relevant skills, such as mapping or legal knowledge. The city charter empowers the council to make appointments to the commission, which are based on applicant skills and even distribution among the wards, then set the boundaries based on the commission’s recommendations.

The resolution establishing the 2022 commission requires that it “provide fair and effective representation for all residents of the City, including racial, ethnic, and language minorities,” take into account “existing infrastructural and natural boundaries” and “preserve identifiable communities of interest.”

Communities of interest can include people “who share spaces like churches [and] grocery stores,” said commission member Alicia Freemyn, of Ward 3, in the meeting, adding that it was important “to not diminish their voting power.” Freemyn is also co-chair of the city’s race and equity task force.

The report indicated that the districts needing population reductions were Ward 3 and Ward 1, with developments such as Editors Park and the EYA developments requiring those districts to shrink. Ward 2 and Ward 4 were required to grow to increase their population counts relative to other wards. Ward 5 grew to a lesser degree, with new developments, like the Riverfront at West Hyattsville, impacting the commission’s decision-making.

The rules for the commission also state, “Wards most likely to be impacted by future development may be smaller by design in order to minimize impact of population growth on future redistricting.”

According to the 2020 census, Hyattsville is approximately 30% white, 31% Black, 35% Hispanic or Latino, and 6% Asian (residents could identify as two or more races), but the wards have varying distributions at the broader neighborhood level.

“Equity was one of our personal big concerns going into this process,” said committee chair Andy Sayer, of Ward 2, in the meeting. Sayer, whose day job involves numerical analysis of geospatial data, noted that Hyattsville Race and Equity Officer Shakira Louimarre provided substantial input and support to the commission throughout the proposed maps’ development.

“The committee went above and beyond in developing the maps and adhering to all constraints,” Louimarre told the Hyattsville Life & Times (HL&T) in an email. She added that the process clearly “reflected the interests and diversity of voices of Hyattsville residents,” and she praised the commission’s commitment “to building equity as a core value into the entire process.”

At the county and state levels, there have been notable controversies involving redistricting, including the recent unsuccessful attempt by Prince George’s County Council to redraw its boundaries for political reasons. That map was struck down by a Maryland judge on procedural grounds, but critics noted that the map was drawn so that several announced county council candidates would no longer live in the district where they were running.

The Hyattsville commission members were united, however, in expressing their desire to explicitly prevent that kind of biased redistricting, even intentionally remaining unaware of city councilmembers’ addresses, according to the report, to avoid the potential for bias.

Commission member Leland Dudek, of Ward 4, said in an email to the HL&T that he was initially reluctant to serve, but changed his mind in the hope of using his background in technology and data analytics to advocate for “fair representation” and “common sense” boundaries.

“Gerrymandering is terrible,” he said. “How do you fix it?” For Dudek and other members, the solution was simply to get involved.

“We were highly motivated to develop fair outcomes,” said commission member Krystil Smith, of Ward 5, in an interview. Smith, an attorney, said she joined to learn more about the City of Hyattsville and get engaged in the community.

After numerous meetings, in-person public outreach at city events, and reviews of public comments submitted online, the commission endorsed two final maps to submit for a vote by the city council, one called Minimal Adjustments and the other labeled Growth Conscious. The two maps are similar overall, with the primary difference consisting of whether to take into account imminent growth from new housing completed after the 2020 census and soon-to-be-built developments. 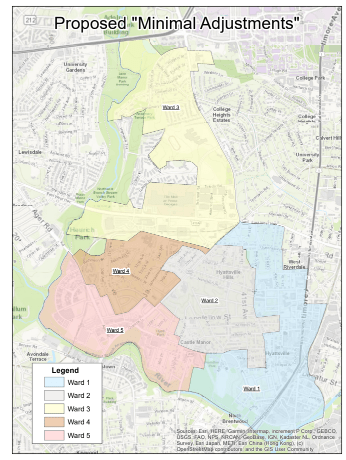 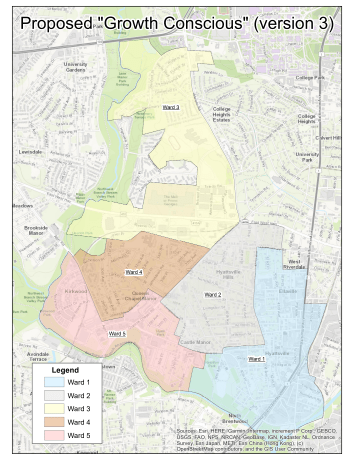 In an email with the HL&T, commission chair Sayer said, “It’s hard to find a single map that would meet both objectives because the ongoing housing developments in Hyattsville since the 2020 census are mostly in Wards 3 and 5 (with a smaller fraction in Ward 1), so they’re not evenly distributed. Most members of the public we’ve spoken with are happy with one or both concepts.”

After an Oct. 17 public hearing, the redistricting commission presented the city council with updated proposed maps for consideration; however, during its Nov. 7 meeting the council failed to gain a majority to approve either map. Instead the council asked the commission to revisit several boundary changes affecting Wards 1, 2 and 5.

Because the decennial boundary changes require amending the city charter, there is a legally proscribed series of public hearings and delays before enactment. Prior to its November meeting, the city council had hoped to approve a new map at its Dec. 5 council meeting, which would allow for sufficient time to inform residents of boundary changes ahead of the scheduled May 2023 city elections.

Paint Branch, a short creek with a long history

Hyattsville Life and Times, 9 years ago 2 min read
Beyond Hyattsville

The Wild Onion is latest UTC restaurant to close

Unearthing history: Could a piece of suffragette movement be hidden beneath a parking lot?