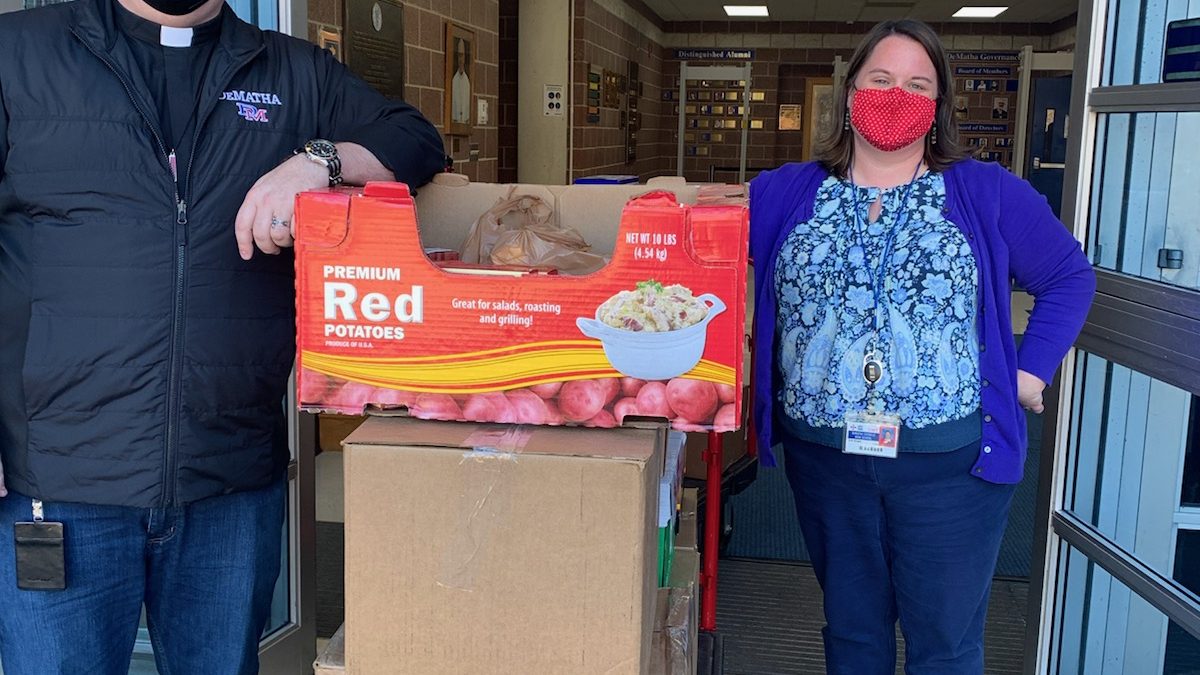 Father Josh Warshak and Erin Bright stand alongside boxes of food just before they were loaded into vehicles destined for Holy Redeemer Parish in Washington, D.C. The DeMatha community and local residents set a record for donations with more than 19,000 food items. Courtesy of DeMatha Catholic High School
Hyattsville

DeMatha Catholic High School administrators were concerned that with far fewer students on campus this year, its annual food drive would suffer. So, they lowered their goal to 5,000 food items.

Instead, the school set a record, receiving more than 19,000.

“We monumentally exceeded our expectations,” said DeMatha Director of Christian Service Erin Bright. “People have been so kind and generous. It feels really good to exceed our goal by so much. Especially this year.”

About 6,000 items came from Hyattsville residents. Members of the crew team placed shopping bags and flyers on porches in nearby neighborhoods, seeking nonperishable food. A DeMatha vehicle brought the students back after school twice to collect.

“I have been incredibly touched by the generosity of our neighbors in Hyattsville,” DeMatha Principal Dr. Dan McMahon said. “Their response was overwhelming.”

The food will feed more than 500 families at Thanksgiving and throughout the Christmas holidays. It is distributed to St. Jerome and St. Mark the Evangelist parishes in Hyattsville, as well as Mary House, Holy Redeemer and Little Sisters of the Poor in Washington, D.C. St. Augustine, also in the District, received $4,000 in Giant and Safeway gift cards.

St. Jerome provides a meal to those in need each Thursday through its café. St. Mark reports on its website that prior to the pandemic, its food pantry was distributing groceries to about 80 families per week. It is now serving well over  300.

“Even in the DeMatha community, we’ve had people hit hard by the virus,” Bright said.

Father Josh Warshak, the school’s director of liturgy and retreats, told the story of an elderly woman who was concerned that she couldn’t move the groceries she had purchased out of her car. He told her not to worry, that they would retrieve them.

“She had 15 extra bags of groceries in her car,” Father Josh recalled. “And she said, ‘If you need more, call me.’ … The generosity and awareness that people have this year has been tremendous.”

The drive, which ran from Nov. 6-20, collected a broad range of items, such as cans of fruit and vegetables, pasta, rice, tomato sauce, coffee, tea and Thanksgiving side dishes. For monetary donations, each dollar was counted as one item. The DeMatha Student Government Association donated $4,500.

While DeMatha students are taught the importance of feeding the hungry and serving the poor, the food drive is an active witness to those principles.

“You can witness to a set of beliefs or a faith in more than one way, and this sort of epitomizes St. Francis when he says, ‘Preach the gospel at all times. When necessary, use words,’” Bright said. “All of us need to eat, so if people are struggling, that’s a pretty straightforward way to help them.”

The team effort between DeMatha and its Hyattsville neighbors demonstrates how much can be accomplished when people work together.

Friends of the Hyattsville Branch closes bookstore temporarily for clean up