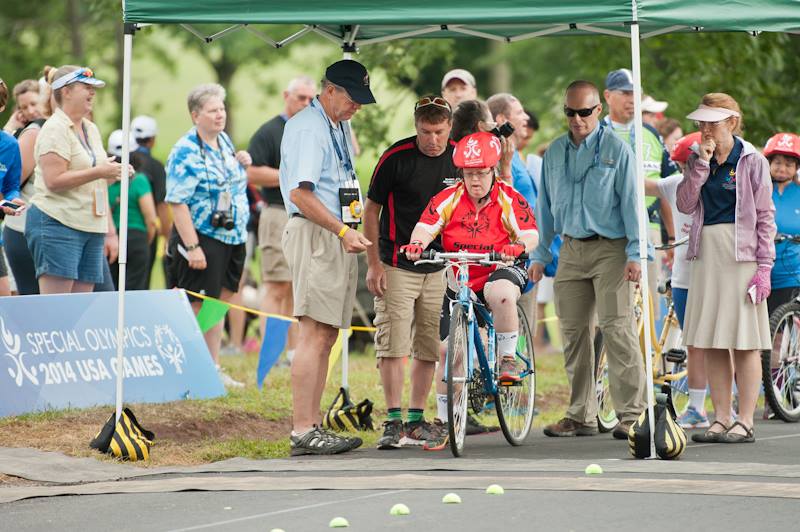 BY ANDREW MARDER — Over lunch and conversation at Busboys and Poets in Hyattsville, Desiree Holland, 43, is reserved, letting her mother speak for her. Candy Holland is happy to recount the feats of the award winning Special Olympics athlete.

Competing in the Special Olympics since she was just 8 years old, the Hyattsville resident continues to rack up successes. This June, Holland won gold in the 10k Cycling Time Trials at the USA Special Olympics held in Princeton, N.J. In over a decade of cycling, Holland achieved almost everything a competitor could hope for, including a silver medal in the world games in 2007.

Her journey to gold was neither simple nor straightforward. Holland trained five days a week leading up to the competition, riding, working out in the weight room, and spending hours on stationary bikes. Her coach, Arrow Bicycle co-owner Chris Militello, says that Holland embodies the Special Olympics Oath – Let me win. But if I cannot win, let me be brave in the attempt.

In 2007, Holland travelled to the World Special Olympic Games in China, bringing home a silver medal. In support of Special Olympics, Holland, the daughter of Hyattsville’s Chief of Police Douglas Holland, jumped into the freezing cold waters of the Chesapeake Bay not once, but twenty-four times over the course of a single day. She also made an annual trip to Capitol Hill to lobby legislators for their support as part of the Special Olympics’ Hill Day.

According to her coaches, all of her experience and determination has helped Holland become the competitor she is today. Her ability to face down adversity was on show at this year’s games in Princeton. Holland was preemptively directed off the course and unintentionally disqualified in one of her earlier races and suffered a crash in a preliminary event.

That crash left her knee almost locked the day of her 10k, making it difficult for Holland to even get her foot onto her pedal. True to form, though, Militello says, “I leaned down grabbed her ankle, and put it on [the pedal], and she pedaled away.” For Holland, the gold medal is one of her crowning achievements, but it’s certainly not the end of the line.

Throughout the summer and early fall, Holland competed in races around the county. All the while, she’s also gearing up for the winter Special Olympics where she plays a support role alongside her mother, Candy Holland. Then, it’s time to jump in the bay again and start preparations for the next year of competition.

Special Olympics activities and competitions run all year long. Special Olympics Maryland works with thousands of athletes across the State, coaching and supporting them through the year in preparation for a variety of levels of competition. Holland and others worked their way up the competitive ladder with the hopes of attending national or international games as representatives of the state.

At this summer’s games, about 160 athletes from Maryland traveled to Princeton, N.J. where they joined more than 3,000 other competitors from around the country. In total, almost 3,500 swimmers, cyclists, gymnasts, and others took part in this year’s games.

Holland will continue to support her fellow athletes as she readies herself for the next round of competitions. Raising funds through programs like the Plunge is key to the future of the Special Olympics. Last year, Maryland’s Winter Water Series, which includes the Plunge, raised $2.25 million in support of the organization. Meanwhile in Hyattsville, the police department’s annual Cops on Rooftops program and Arrow Bicycle’s Cyclocross race in Magruder Park help support local and state initiatives.

The whole process of training, competing, and supporting has given her the confidence to take on new challenges and her dedication has changed the lives of her coaches and family.

“What she does is amazing,” Militello says. “I wish more people could see what goes into all this — it’s pretty uplifting.”

PHOTOS: Young and old gather to spread some love for Valentine’s Day

Hyattsville Life and Times, 4 years ago 8 min read
Beyond Hyattsville

My Two Cents: Safe Haven offers warm shelter for homeless — and warm feelings for its volunteers