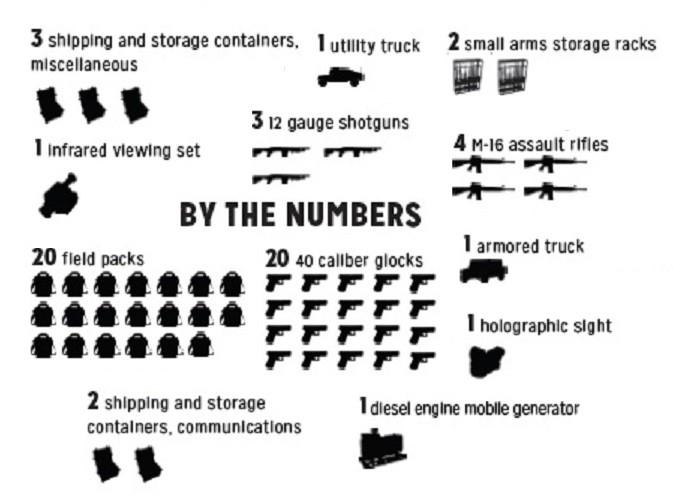 Assault rifle theft assumed to be the reason; city will seek reinstatement

The Hyattsville Police Department (HPD) has been suspended from the federal military-surplus program that gave the city a Humvee this year – as well as many other previously undisclosed items dating back to at least 2006.

Among these items are four assault rifles that were acquired in 2006 and 2008, according to a partial list provided by the Maryland State Police. One of these was stolen from a Hyattsville police cruiser on July 11, 2010, when Ofc. Danielle Gray parked her cruiser overnight in the 1500 block of Madison Street in Chillum.

The next morning, according to the police report, she found the windows broken and police property stolen – including what police say was a Pentagon-supplied AR-15 assault rifle, which has been described as the civilian twin of the M-16. An arrest was made, but the rifle was never recovered.

Police speculate that this is the reason for the suspension, which reportedly took effect in April. But Hyattsville Police Chief Douglas Holland and City Administrator Tracey Nicholson say they learned of the suspension on August 27, when contacted by ABC News.

Holland said his office notified the Pentagon, the Prince George’s County Police Department, and the Maryland State Police Department the day the theft occurred. It was – and is – against department policy to store a weapon in a vehicle overnight.

However, there is no evidence that the city’s elected officials were notified. In 2010, Hyattsville Mayor Marc Tartaro was the president of the Hyattsville City Council. He told the HL&T that he was not aware that the police had any assault rifles, and doesn’t recall hearing about the theft at the time.

The HPD is trying to clarify the reasoning behind the suspension, and officials say they intend to try to have it lifted. It’s strange, said Purvis, that there was a four-year gap between the theft of the AR-15 and the suspension.

According to news website Fusion, 184 departments have been suspended across the country “for missing weapons or failure to comply with other guidelines.” The lost equipment includes assault rifles, pistols, shotguns and Humvees.

The program, which has made national headlines recently in the wake of the riots in Ferguson, Missouri, allows police departments around the nation to be supplied with surplus military-grade equipment “for bona fide law enforcement purposes that assist in their arrest and apprehension mission,” according to the Pentagon’s distribution services website. “Preference is given to counter-drug and counter-terrorism requests.”

More than 8,000 law enforcement agencies are participating in the controversial 1033 program, with opposition centered around the perceived increase in police militarization. Last year, the City ultimately decided to accept the Humvee amidst a flurry of comments on listservs and passionate arguments before the City Council. Many other police departments in the U.S have accepted similar armored vehicles.

But the other items the HPD received were never disclosed to the city’s elected officials. Tartaro described the acquisition of assault rifles – including four M-16s  – as “highly disturbing.”

“An M-16 is a war weapon,” Tartaro said. “There’s actually no reason why the police department should have an M-16 in my mind.”

The police take a different stance.

Purvis described the program as “awesome. …  The fact that we don’t have to spend money on equipment that we can use to help benefit the community and benefit the police department [is good].”

“It’s important to explain that we don’t acquire anything we don’t think we need,” said Nicholson, a retired Army colonel. “We employ pieces of equipment that we think will protect the community in the best way that we can.”