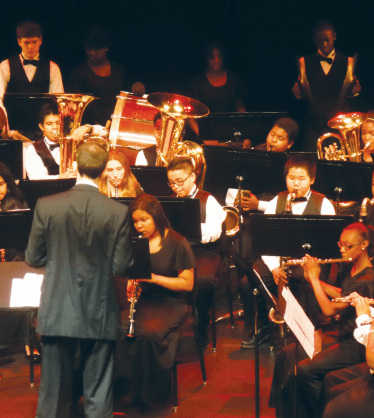 The Hyattsville Middle School’s Center for Performing Arts (CPA) celebrates its 10th anniversary this year, and it has been a stellar year for the program, with high state adjudication scores and teachers honored by the Prince George’s County Board of Education. A special gala at University of Maryland’s Clarice Smith Center marked the occasion by showcasing all eight artistic disciplines of the CPA program.

The sold-out gala on May 23 featured dance, music, readings of student poetry and a performance of selections from “A Midsummer Night’s Dream.”

Hyattsville CPA alum honored at the event included 22-year-old Marcus Canty, an R&B soul singer who finished fourth place in the first season of The X Factor U.S. He spoke to the students about the need to keep focusing on dreams.

The choir, band and orchestral performances highlighted the event, displaying the talent that won high scores in various competitions and adjudications this year.

Choir director Reuben Burrows believe HMS’s is the best middle school choir in Maryland. He notes that only 20 middle schools qualified to take part in the 2013 Maryland State Level Choral Adjudication, and the HMA CPA Choir was one of only two choirs to perform repertoire and sight-read music at Level IV, which Burrows notes is “the most difficult level available for middle school.”

At this challenging level, they still scored higher than all other choirs in the state as they earned straight “Superior” ratings from each judge. One gave them a perfect score in all categories, which Burrows describes as “an extremely rare feat.”

Burrows, Simmons and Bradley were all also honored in May at the annual Prince George’s County Board of Education Awards Night, which for the first time this year honored choral and instrumental educators.

PHOTOS: Mead staged to make a quite literal historic comeback