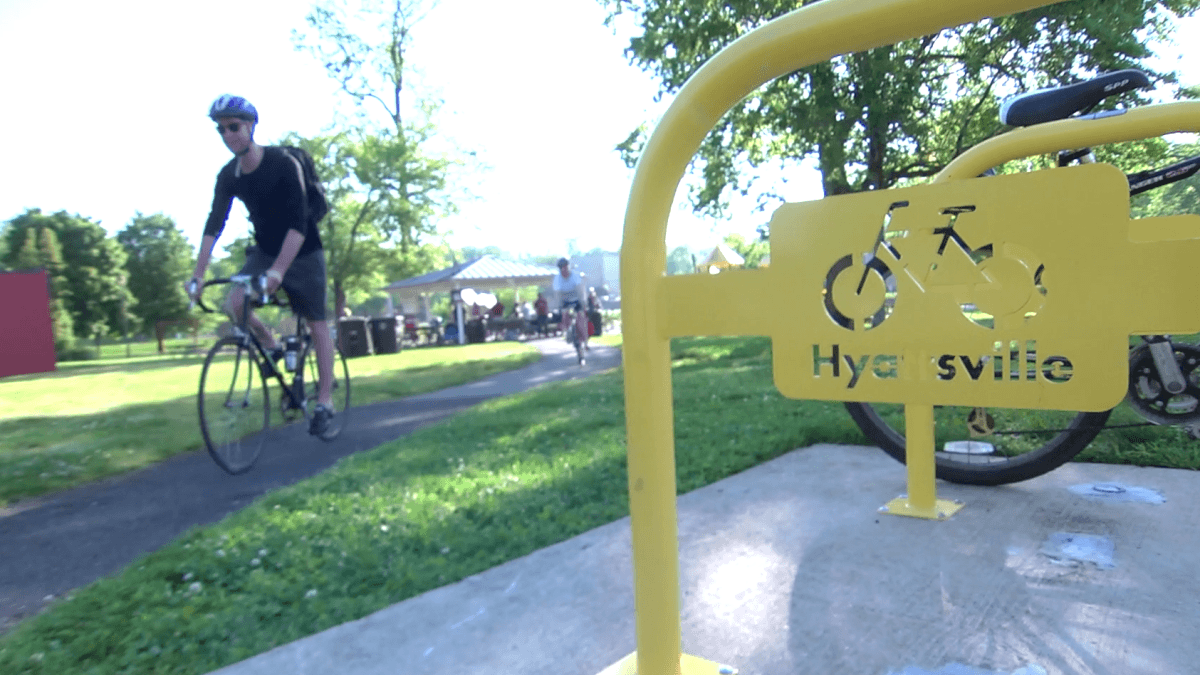 BIke to Work Day 2013. Photo courtesy the City of Hyattsville.
Beyond Hyattsville

BY SCARLETT SALEM — Ever consider biking to work when you are sitting in the DMV’s notorious traffic? On Friday, May 15, the League of American Bicyclists will incentivize your urban commute when Bike to Work Day (BTWD) hits Hyattsville.

The City of Hyattsville offers a pit stop in Magruder Park for the morning commute, from  6:30 to 8:30 a.m.  It is one of nearly 80 registered BTWD pit stops in the District, Maryland and Virginia.  Resources at each pit stop vary, offering raffles, music, food, drinks, bike maintenance assistance, a chance to meet up and travel with other riders and more.  Most pit stops take place during the morning commute and a few open on the commute home.

Mount Rainier resident John Campanile has served as the Hyattsville pit stop coordinator since 2011. Campanile, an avid cyclist and bike to work commuter himself, distributes fliers to promote the event about a month in advance every year to local businesses and also spread the word via his personal social media pages. He also collects bikes maps and informational fliers from local agencies to have available for event day.

On May 8, he and other volunteers will meet in Fairfax, Va. to sort out t-shirts and other giveaways for local BTWD pit stops. He will also be at Magruder Park bright and early on BTWD. He said that giving out the t-shirts on BTWD is one of his favorite parts because “everyone wants a tee, right?” Thus far, about 86 people have registered for the pit stop, according to Campanile.

Cheri Everhart, recreation event coordinator for the City of Hyattsville, will arrive early on May 15 – around 5 a.m. –  for set up and will not leave until the event is over. The city, which has been offering and staffing the Magruder Park BTWD pit stop since 2007, will be providing fruit, granola bars, and water for cyclists, and has coordinated efforts with  the local cycling shop, Arrow Bicycle, to promote the event through the City’s monthly publications, website and social media.

“Personally it’s a great event. … It’s a lot fun,” said Everhart. “You meet a lot of people. It isn’t just our residents that stop here, it’s people from Greenbelt and beyond that are commuting into DC.”

One highlight of the Hyattsville stop is the two Arrow Bicycle employees who have served commuters as mechanics since 2007 – even before the shop opened its doors. Arrow also lends two other mechanics to the Greenbelt pit stop.

“We bring tool boxes, tools, and stands,” said Chris Militello, Hyattsville resident and Arrow co-owner. “If you have a flat and are not prepared, we will also have tubes. … The last thing we want is someone to lose their job on Bike to Work Day because they are a novice,” he joked.

Participants are encouraged to register through the BTWD website because the information is used by WABA and other organizations to advocate for proper bike infrastructure.

“Even if on that day, the stars do not line up and it doesn’t work out for you, but you are thinking about it, go and sign up,” said Militello.  “It shows the city there is a need to expand bike and pedestrian infrastructure.”

The recent city council discussions regarding expansion of the capital bike share program show there is an interest to expand bike commuting in and around Hyattsville.

“Over the last few years the city has tried to engage the cycling community.” Everhart said. “[It] has been trying very hard to make this a city that has alternative forms of transportation so people aren’t driving everywhere. This is something our residents want.”

“BTWD is an important event to introduce newcomers to the pleasure of bike commuting,” said Hyattsville resident and regular bike commuter, Benjamin Toll. “Hyattsville is ideally situated as bike commuting community with easy connections to D.C., College Park, Silver Spring, and even Bethesda.  When buying our house, the ability to bike commute was a major factor in us choosing Hyattsville, and I’ve even gotten to know a number of neighbors from commuting together.  I work in Foggy Bottom, and during rush-hour, bike commuting is quicker for me than both driving and metro/bus.”

Toll also said, “The pit stops offer a wealth of information on services and programs to assist those who commute by bicycle, as well as information on advocacy, and it provides the opportunity to get to know some of the strange and friendly folks of your local bike shop.”

The event is held in rain or shine and the BTWD website offers resources for first time riders, including tips on bicycling in the rain, and even provides an avenue to find a riding buddy for May 15.

To register for BTWD and for more information and other resources, head to http://www.biketoworkmetrodc.org/. Also check out Arrow Bicycle’s Facebook page for BTWD updates and other information: https://www.facebook.com/arrowbicycle.

Hyattsville Life and Times, 7 years ago 10 min read
From the Editor

From the Editor: When the press becomes the news

Letter to the Editor: A councilmember thanks the community