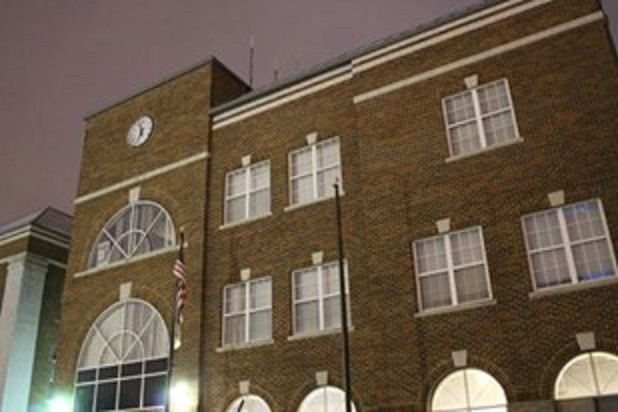 Hyattsville elected officials may get pay raise in 2017

BY REBECCA BENNETT — The Hyattsville City Council voted to accept the Compensation Review Committee’s recommendation to raise the salary of councilmembers and the mayor at the Feb. 19 council meeting. The increases are scheduled to take effect in 2017 and run through 2020.

The measure had been voted on—and defeated—at the Feb. 2 council meeting, but Councilmember Edouard Haba (Ward 4) said he requested that it be put back on the agenda so the city attorney could address some questions and because several councilmembers were not present on Feb. 2.

The council could not alter the recommendations of the review committee, but could only accept or reject them, according to city documents. 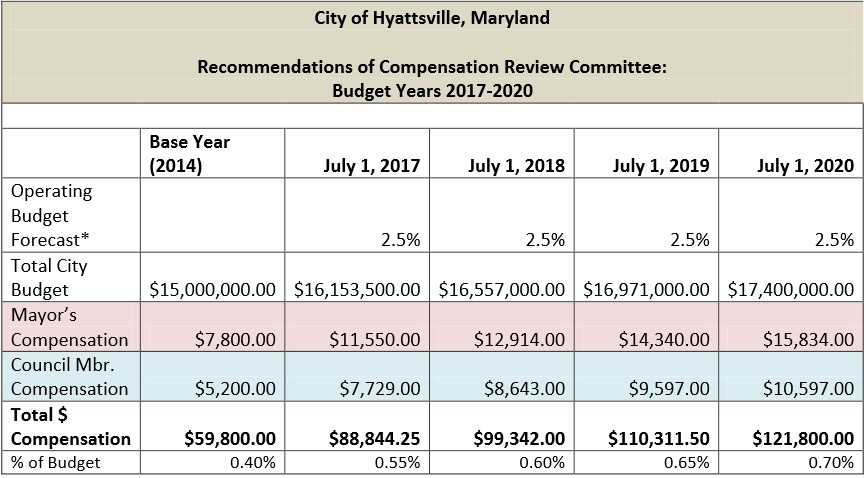 When looking at annual compensation, Hyattsville is 9 out of 10 for mayor and 8 out of 10 for councilmembers, Libby-Mueller said. However, at 0.4 percent of the total operating budget, she said Hyattsville is 4 out of 10 when it comes to how much is allocated. The proposed increases, which would approximately double compensation by 2020, would bump Hyattsville to only 0.7 percent of the total operating budget (up to number 3), she said, citing that the city has more councilmembers than the other cities they reviewed.

Libby-Mueller said that the city treasurer briefed the committee that there was an estimated 2.5% forecasted yearly increase in the operating budget during this time period.

“We’ve seen a lot of aspirational and forward-thinking things come out of this council,” Libby-Mueller said, citing a lower voting age and non-discrimination policies. “We were starting in a place about being an example of paying a fair wage for labor.”

“The increases are too high,” Councilmember Tim Hunt (Ward 3) said. “We haven’t fully dealt with healthcare and retiree benefits. When we do, it’s not going to be pretty. … I don’t think the place to start dealing with wage fairness is in the city council.”

Coucilmember Robert Croslin (Ward 2) also said he thought the increases were too high, though he did think that councilmembers should be paid more. “I would think that we need to consider staff first,” he said.

When asked by Councilmember Paula Perry (Ward 4) if the committee looked at non-monetary incentives, such as travel to the National League of Cities, cell phones and laptops, Libby Mueller said the committee did not..

Councilmember Joseph Solomon (Ward 5) said, “This is something that’s a bit aggressive. They have a reason for wanting it to be this aggressive, but we also have to look at the way we’ve treated aggressive increases across the board for our staff as well,” citing that they have told staff they don’t want to be so aggressive and they want to take their time.

“I’m not going to apologize for saying that I think our city councilmembers should be paid more money,” Councilmember Shani Warner (Ward 2) said. “I see this play out when trying to encourage people to run for council. I see it play out in who runs for council. … I want to make the council more representative, I want to make it fair, and I want to say that we value the work that goes into this.”

“When you are able to frame the conversation in a way that says What if it paid half of your mortgage, would you consider reshuffling things? The answer is usually yes.” Libby-Mueller said. “And, it’s not because they want more money. It helps them balance the service in their life in a way that’s meaningful.”

“I think it’s not unfortunate that we can’t go back and modify the recommendation,” Patrick Paschall (Ward 3) said, citing that the council does not have the opportunity to influence the recommendation. “That’s the design, so that citizens can make decisions for themselves about what the citizens think are appropriate and the council has the opportunity to accept or reject it.”

Councilmembers Perry, Croslin, Hunt, and Solomon voted against the raises, but the motion still passed.

The recommendations will now be drafted into an ordinance, according to a city memo, and will be presented to the council for a first reading on March 2.

PHOTOS: More than 4 inches of snow on a Saturday afternoon