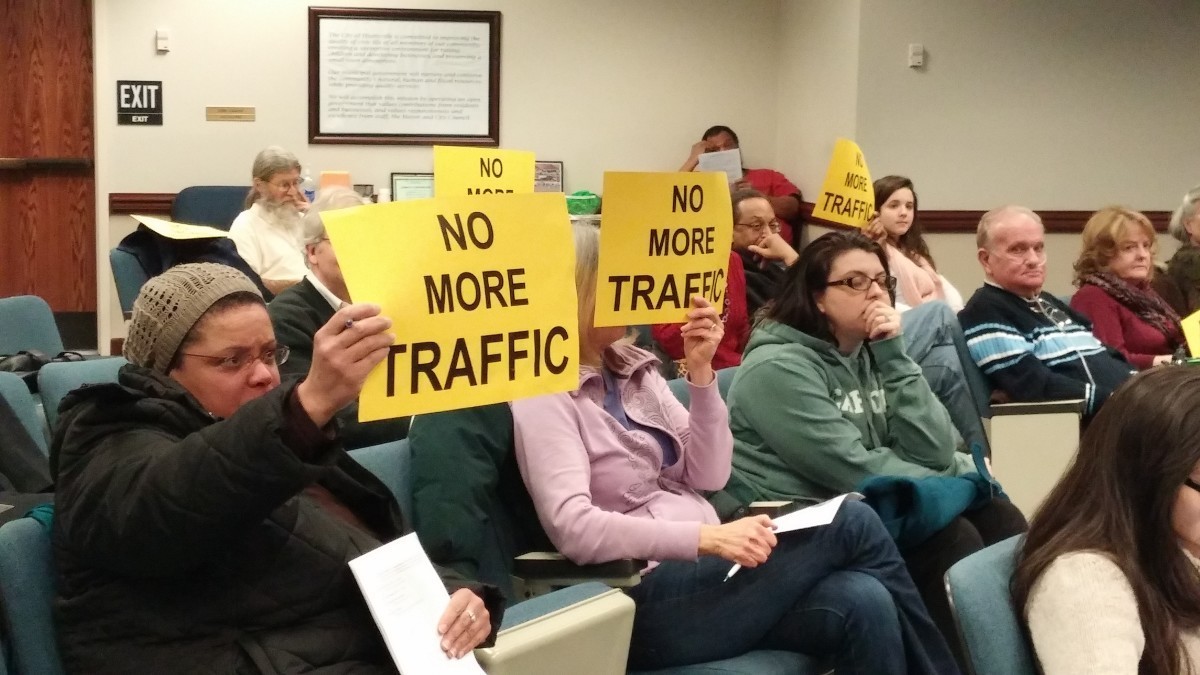 BY REBECCA BENNETT — At the Feb. 19 Hyattsville City Council meeting, the council discussed possible changes to the Queensbury Road access restrictions that are in place. Currently, traffic is not permitted to enter westbound Queensbury Road past 43rd Avenue during the hours of 6:30 to 9:30 a.m.

Councilmember Candace Hollingsworth (Ward 1) said that the intent of the discussion was not to do away with the traffic restrictions altogether. She said she had gotten several inquiries from residents to allow a special exemption for people who live on that road or on adjacent blocks.

Councilmember Patrick Paschall (Ward 3) addressed the way the discussion item was submitted and said that it would have saved residents and councilmembers time and stress if the intent of the discussion had been more clear.

“Don’t interpret our talking about wanting to look at this from a larger perspective as saying we don’t care about what’s happening on Queensbury,” Councilmember Shani Warner (Ward 2) said. “We want to think about this in the context of the whole community.”

Seven Queensbury Road residents, many holding signs that read “no more traffic,” came out to voice their concerns about the council’s impending discussion on easing the restrictions.

“We would like less traffic, not more traffic,” Queensbury Road resident Nina Faye said. “We have talked many times about expanding the Do Not Enter to evening rush hour. It has been very common for evening traffic to be backed up from Queens Chapel [Road] to 42nd Avenue.”

“Those restrictions really do matter to those of us who do live there,” Cindy Vaughn said, another resident of Queensbury Road.

Referencing a 1991 study done about traffic on the street, Richard Anderson said, “In the [morning] 414 cars per hour go down the road. It lessened it to 176 cars after the one way sign.”

Speaking in favor of loosening the access restriction, nearby resident Carl Neilsen said he recommends a sticker for Hyattsville residents during the restricted period.

“I have seen in other areas signs that say local residents only, and there has to be some way to distinguish those residents,” City Administrator Tracey Nicholson said.

“If you’re going to issue some permits so some people have a lift on the restriction, maybe some other people would like a lift on restrictions, too,” Hugh Turley said, who has lived on that road for approximately 40 years. “I’d like to come down 43rd Avenue. It’s a one way street. … If someone is getting an exemption to go through one sign, we should all be exempt from these traffic restrictions. We could all have stickers on our cars and go wherever we want to go.”

Because we’re so close to the light [at Queens Chapel Road], we get the majority of the congestion,” Vaughn said. “People will sit in front of your home with their radios blasting. Our property values are being affected.”

Biddier said frustrated drivers even throw trash out of their windows. “It’s not just cigarette butts and cups. It’s diapers—fully loaded. And there are other personal use items that should not end up on the street. We pick up liquor bottles, beer cans, and dumped ash trays. We try to do what we can to make this city pretty.”

“We wish we had it in the evening, because you can’t get out of your driveway,” Anderson said. “If it was you, you would understand what we on Queensbury Road understand.”

Update: Three inches of snow on the ground; officials urge drivers to stay off the roads

Miss Floribunda: Toto, I have a feeling we’re not in Maryland anymore