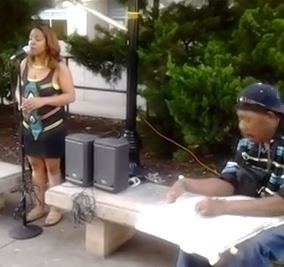 BY KATY JUNE-FRIESEN — Hyattsville singer and songwriter Mishael Justice Washington is serenading Metro riders around the region in an effort to jump-start her music career, reports The Gazette’s Jamie Anfenson-Comeau. Washington, who graduated from Northwestern High School and is now attending Prince George’s Community College, has been singing R&B and pop at Metro stations to raise money for her first album. She told The Gazette,

“I started looking into studio time, but it was really expensive. So I was trying to think of a way to do that, and I thought, the perfect way to do that was to sing in the subway to raise money, where people will notice me.”

Washington covers artists like Lady Gaga and Beyonce but also writes her own songs.

“When I write, I like to send a message to what a lot of my friends are going through, things I go through, or something young adults go through.”

Auntie Diluviana: Being safe at home