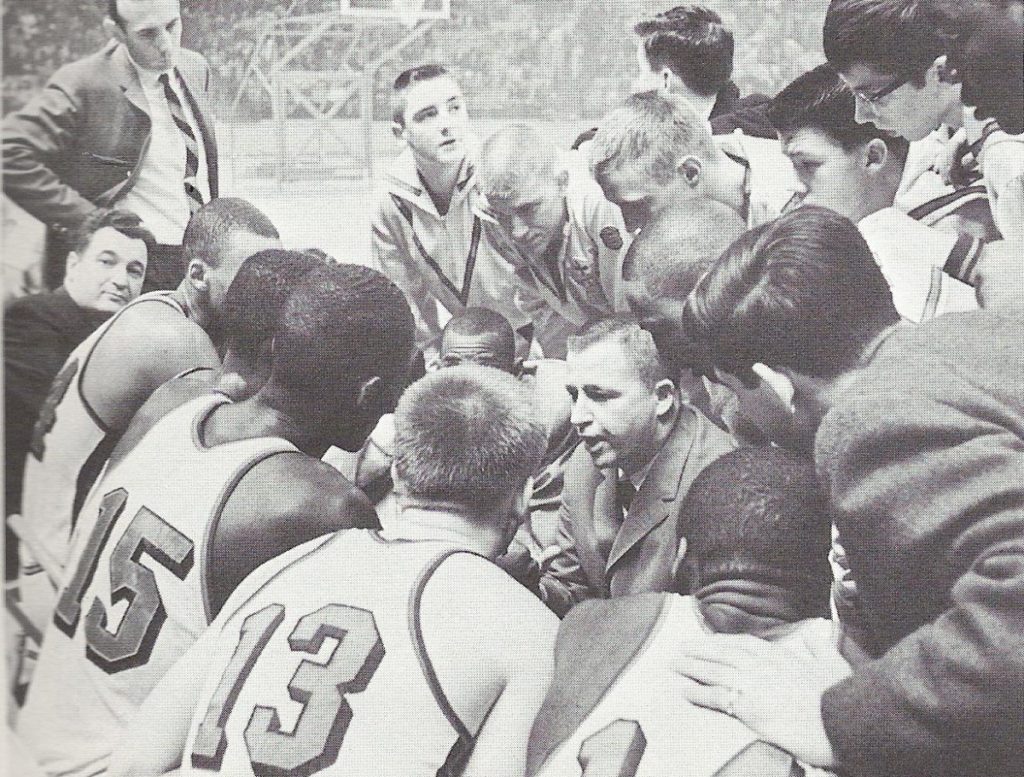 By CHRIS McMANES — For more than 70 years, some of the nation’s finest pre-college basketball has been played in Hyattsville. From DeMatha to Northwestern High School, from St. Mark to St. Jerome, the city’s tradition of excellence is nearly unparalleled.

DeMatha has one of the strongest basketball programs in the country and plays regularly on national TV. The Stags’ 20 NBA players all-time are the most of any non-boarding high school.

DeMatha opened in 1946 and went through a series of basketball coaches in its early years. In 1955-56, sophomore Ernie Cage powered Coach Joe Boland’s Stags to a 20-7 record.

Coach Morgan Wootten’s arrival the following season began one of the greatest dynasties in high school sports. For the next 46 years, the Master of Madison Street guided DeMatha to 33 Catholic league titles, two undefeated seasons and five national championships.

Cage finished as a three-time All-Met and the Stags’ first All-American. In 1965, DeMatha handed New York’s Power Memorial the only loss of Kareem Abdul-Jabbar’s prep career. With extensive TV, radio and print coverage of the Stags’ 46-43 victory, DeMatha began to take on a national profile.

“It took the game from a quiet locality and injected the great players and the great teams to national attention,” Wootten said. “So it was, in that way, the greatest high school basketball game ever played.”

Dantley, a three-time first-team All-Met, is arguably the finest player in DeMatha history. He led the Stags to four No. 1 final rankings. During his final two seasons (1971-73), DeMatha was 60-2.

Wootten retired in 2002 with a career record of 1,274-192 (.869). He turned the reins over to Mike Jones, one of the stars of his undefeated 1990-91 team. Jones entered this season with 468 victories and seven Washington Catholic Athletic Conference championships. He has coached six NBA players, including Fultz, the No. 1 overall pick of the 2017 NBA Draft.

Wootten and Dantley are enshrined in the Naismith Memorial Basketball Hall of Fame.

In 1967, 11 years after Northwestern won its first state championship, the Wildcats (20-1) captured their second. Mark Christian was named MVP of the two-game tournament with 37 points and 45 rebounds. Fox had 36 points and 31 boards.

Bias was a two-time All-Met who as a senior led the Wildcats to the 1982 state championship game. He became a first-team All-American at Maryland. In 1987, his brother, Jay, and Clinton Venable guided Northwestern to another state crown.

The Bias brothers’ lives ended tragically. Lenny died of a cocaine overdose two days after the Boston Celtics made him the No. 2 overall pick of the 1986 NBA Draft. On Dec. 5, 1990, Jay was shot to death in the parking lot at Prince George’s Plaza.

In 2004, Green averaged 19.4 points and 14 rebounds to lead the Wildcats to their fifth state championship. He began this season with the Utah Jazz.

“It’s amazing,” said Grant, who plays for the Denver Nuggets. “We’ve had a lot of extremely talented players.”

City toasts to 25 years of the Hyattsville Farmers Market