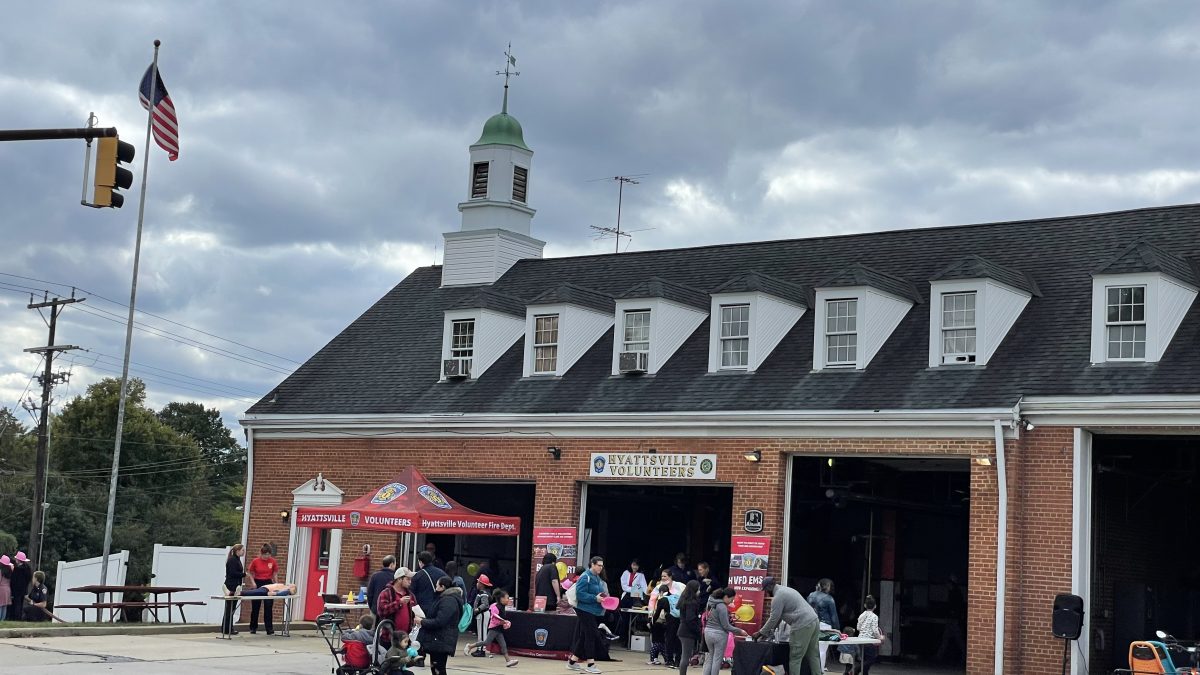 HVFD reaches out during its October open house

On Oct. 8, the Hyattsville Volunteer Fire Department (HVFD) held its annual open house, which started at 11:00 a.m. and lasted for four hours. Nearly 50 families, including many excited kids and toddlers, attended the event, which offered activities like trying on firefighter gear, meeting the firehouse mascot, exploring a kids’ fire safety adventure course, and much more.

According to HVFD volunteer Abby Klink, who is also a senior studying biomedical engineering at George Washington University, open houses are the HVFD’s main outreach event to the community. They also provide a good opportunity to recruit new volunteers to the HVFD.

“Really it is about community outreach and saying ‘hi’ to Hyattsville,” said Klink. “We just want to show our community how we operate … how it feels to be a firefighter or be part of Emergency Medical Services [EMS].”

Established in 1888, the HVFD is a combination fire and EMS nonprofit organization, according to its website.  The department provides emergency services to a response area that stretches from Takoma Park in Montgomery County to Lanham, Bladensburg, College Park, Chillum and Mount Rainier in Prince George’s County.

“You name it; we have seen it. Everything from fire to natural disaster, EMS incidents, also to something as simple as somebody feeling ill or somebody hurting himself at home or somebody at a nursing home becoming very ill,” said John Shaw, 67-year-old care provider, who has worked with the HVFD since 1990.

According to Shaw, every HVFD open house presents basic safety skills, like how to dial 911 and get help in an emergency. Participants also learn about first aid, EMS services and community safety.

Amanda Fenton said she attended the event because her 21-month-old son loves fire trucks. “We always walk past the fire station on the way home, and he gets very upset if we don’t stop by the station,” she said. “We came to this event, and it’s his favorite.”

Maryland Salamanca brought her 3-year-old son for similar reasons. “My son loves car stations and emergency vehicles, and I hope he enjoys it today,” she said.

Salamanca and other parents also hoped their children could learn safety tips at the event.

Hyattsville resident Sarah Weber brought her two boys, ages 5 and 9, to the open house and explained that her youngest was especially interested in vehicles and fire trucks. She noted,“When it comes to safety tips, they learned them through their Cub Scouts, and they may learn something from today’s event, too, but it’s more fun [here].”

Fatema Hosseini is a graduate student majoring in journalism at the University of Maryland.

Hyattsville Life and Times, 5 years ago 5 min read
Beyond Hyattsville