Postcards from the Past

Postcards from the Past: Husbands brought home the bacon — and other groceries

BY PEGGY DEE — Late one summer afternoon, I had a very interesting chat with Louise, who lives on Hamilton Street and who is 100 years young. She and her late husband moved to this house in 1937 and she remains there today. In those days, Hamilton Street was known as Owens Avenue. There were a few houses across the street, where the WSSC building would later stand.
Having raised five children here, Louise had a few interesting stories to tell.  During the 1940s, her children attended the Hyattsville Elementary School, which at that time was located on Gallatin Street, between 42nd Place and 43rd Avenue. The original Hyattsville High School was located at 42nd and Oliver, where the middle school is today.  Northwestern High School was built in 1951 and her children went there to high school. 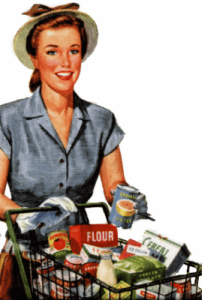 Louise remembers those long, hot Hyattsville summers when there was no air conditioning. She had a screened-in front porch and many of her neighbors would gather on her porch at night after the children went to bed. She also remembers that she and the other mothers would park their baby carriages out on the screened porches during the day, where the sleeping babies were perfectly safe.
Most of the women, in those days, were not employed outside the home. There was a small Safeway grocery store on Gallatin Street across from the elementary school, where most of the ladies would shop during the day.  As most of the families had only one car, which the husbands took to work, each housewife would complete her shopping by labeling each bag with a number and her name. The husbands on their way home would stop by the Safeway and pick up the bags.
She has special memories of the activities at Magruder Park, including family picnics.  Each July 4th, her family members and friends would gather on her front lawn and porch to watch the fireworks. On Easter Monday, there was an egg hunt, sponsored by the Kiwanis Club.  The children were given money for each egg that they found. If they found a golden egg, they would receive $5. Each family had a fenced-in yard and the children would play in each other’s yards. Halloween evenings were especially nice, when the kids safely went door to door.  The contest of guessing the identity of each costumed child made for a lot of fun.
Monday was always the day for washing clothes and most of the housewives used wringer machines.  Louise laughed when she said that there was a real competition among the ladies, as to who could get their clothes out on the lines first. Then Tuesday was always the day for ironing.
Walking down to Route 1 and shopping at Woolworth’s, Deitz Department Store and Tony George’s Deli is something that Louise will never forget. The deli was known for its delicious bakery products and homemade candies and was a favorite neighborhood gathering place.
Several doctors and dentists were also located on Route 1. Dr. Sylvan Deitz — the brother of Aaron Deitz, who owned Deitz Department Store — had an office on Gallatin Street.  She remembers making many trips to the old Peoples Drug Store between Gallatin and Jefferson streets, and Dudrow’s Drug Store, which was just across the street. The piped-in Christmas music and the decorations in December is a memory that she will always treasure.
I had such an enjoyable afternoon chatting with Louise on how life in Hyattsville used to be. I learned so much and it brought a sentimental tear to my eye.  I wish Louise the very best and hope that she has many more birthdays.

Digging it: Scenes from the Hyattsville Community Garden’s first season

Hyattsville Life and Times, 9 years ago 2 min read
Beyond Hyattsville