BY HUGH TURLEY — On August 6 and 9, 1945, Paul Tibbetts and Charles W. Sweeney piloted the bombers that dropped atomic bombs on Hiroshima and Nagasaki. A little-known fact almost stranger than fiction is that they were also the first Americans to go to Japan and see the devastation of their bombs.
Japan officially surrendered aboard the USS Missouri on September 2, and the next day Tibbetts and Sweeney flew from their base on Tinian to Omura, about 15 miles from Nagasaki.
“We did not know the Navy was waiting offshore to get radiation clearance,” Sweeney told Reed Irvine, head of the group Accuracy in Media, in 1995. “We didn’t even know about radiation.”
During World War II, Irvine was a young Marine lieutenant and a Japanese interpreter. He was surprised when Sweeney told him they went in with no interpreters in their group of about 20 men. 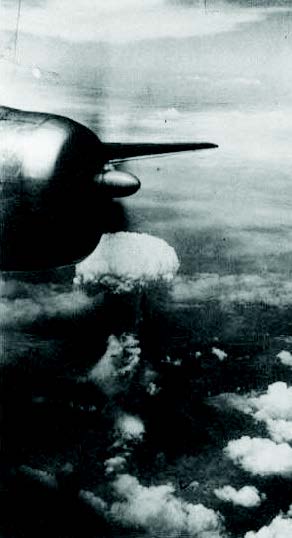 In his 1997 book War’s End: An Eyewitness Account of America’s Last Atomic Mission, Sweeney wrote that when they landed at Omura, several bewildered Japanese soldiers met them. The Americans used pidgin English and pantomime to secure some rickety, rusted trucks for the 15-mile drive to Nagasaki.
They spent the night at a small resort hotel on the outskirts of Nagasaki, which had been a popular tourist destination before the war. Sweeney writes that the English-speaking innkeepers “took care of us as best they could,” despite the drastic food shortages at the end of the war.
At first Sweeney hesitated to sign his name on the hotel register, but did so after Tibbetts boldly wrote “Colonel Paul W. Tibbetts USAAF.”  No one knew they were the men who had dropped the bombs.
Both Tibbetts and Sweeney held the popular opinion that the atomic bombs were necessary to force the Japanese to surrender and that the killing of an estimated 200,000 Japanese civilians saved American lives.
Others have said the Japanese had already lost militarily and efforts to negotiate their surrender were ongoing from early 1945. President Dwight Eisenhower told Newsweek in 1963, “The Japanese were already defeated and it wasn’t necessary to hit them with that awful thing.”
Rear Admiral Ellis Zacharias, in a Look magazine article published on June 6, 1950, wrote of dropping the atomic bombs: “I submit that it was the wrong decision. It was wrong on strategic grounds. It was wrong on humanitarian grounds.”
During the war Zacharias was Deputy Director of Naval Intelligence. He said, “We knew quite definitely by the end of 1944…that important elements in Japan were ready to sue for peace.”
Secretary of the Navy James Forrestal supported efforts to negotiate a Japanese surrender. The Emperor of Japan had asked the Holy See in Rome to intervene, with Pope Pius XII as a mediator. Tokyo had also asked the Russians to help negotiate a peace.
According to Zacharias, delays by the State Department and the White House in negotiating peace were the result of top-secret decisions reached at Yalta with Stalin. Forrestal had opposed giving Russia the Kuril Islands and postwar influence over China. Russia’s declaration of war on Japan on August 8, 1945, had no effect on the outcome but let the Russians drive into East Asia.
If the United States had agreed, as it later did anyway, to the preservation of the institution of the emperor, the war might have ended earlier. The bloody battles of  Iwo Jima and Okinawa could have been avoided and there almost certainly never would have been a Korean War.

Miss Floribunda: Forsythia is your friend