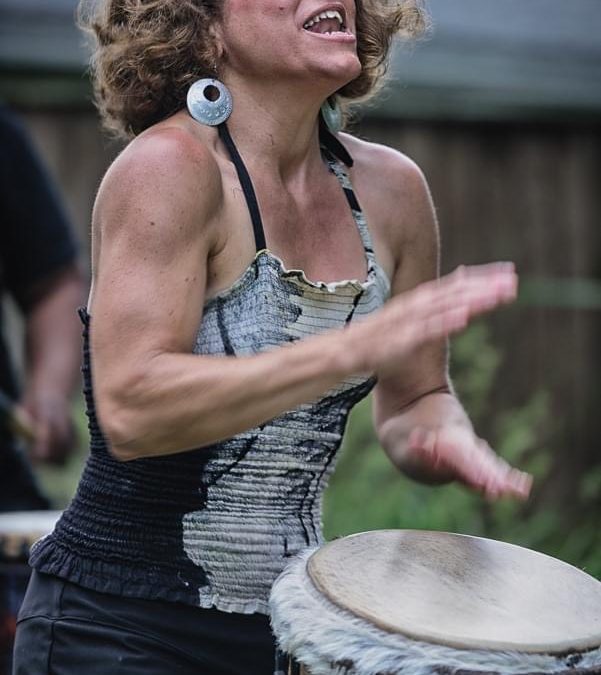 Arant performs in her backyard during a Black Lives event after the killing of George Floyd. Courtesy of Wayne K. Thomas
College Park

West Africa’s Mandingue people have a long tradition of using a drum called a djembe to bring people together. With sharp, high-pitched tones and low, round bass sounds used to create complex, rhythmic music, it’s hard to imagine that the drum wouldn’t attract people to listen.

And in College Park, one musician uses that same style of drumming to gather a diverse group of people from around the DMV.

The woman behind it all is Kristen Arant, also known as the Drum Lady, who has been a musician, teacher and activist in the Washington area for about 20 years.

Arant grew up in St. Louis, Missouri and attended the University of Missouri, where she studied journalism and music, specializing in the oboe. There, she was inspired by a women’s studies course to be a part of the third-wave feminist movement taking place at the time.

When she graduated, a friend gave her a type of djembe, called a Remo, which has a body made from plastic rather than a tree trunk. This gift changed Arant’s life.

She moved to Washington in 2000 to work as a union organizer for a hotel and restaurant employees union. She played her djembe on the picket lines during demonstrations. Arant soon realized that she wanted to learn more about the drum.

“I’m a musician,” she said. “I’m not going to just play an instrument and not know how to really play it, where it came from and what it was used for.”

Eager to learn different styles of African drumming, Arant sought out teachers and even went to Ghana to study drumming techniques there.

Arant has combined her love of music and her dedication to activism to teach other aspiring musicians. In 2005, she started the Young Women’s Drumming Empowerment Project, in D.C., a summer program for girls between the ages of 10 and18. The program aims to empower young girls through drumming, poetry, movement, song and performance.

Arant said that most of the girls in the  program were initially shy; she suspected that they were reacting to the discrimination they experienced growing up. She noticed how much they opened up when she gave them a drum.

“Feeling part of a community emboldened these girls,” she said. “The other thing is just total physics: The drum is loud; they play the drum; they’ve already been loud. They’re not as scared after that to let their voices be heard.”