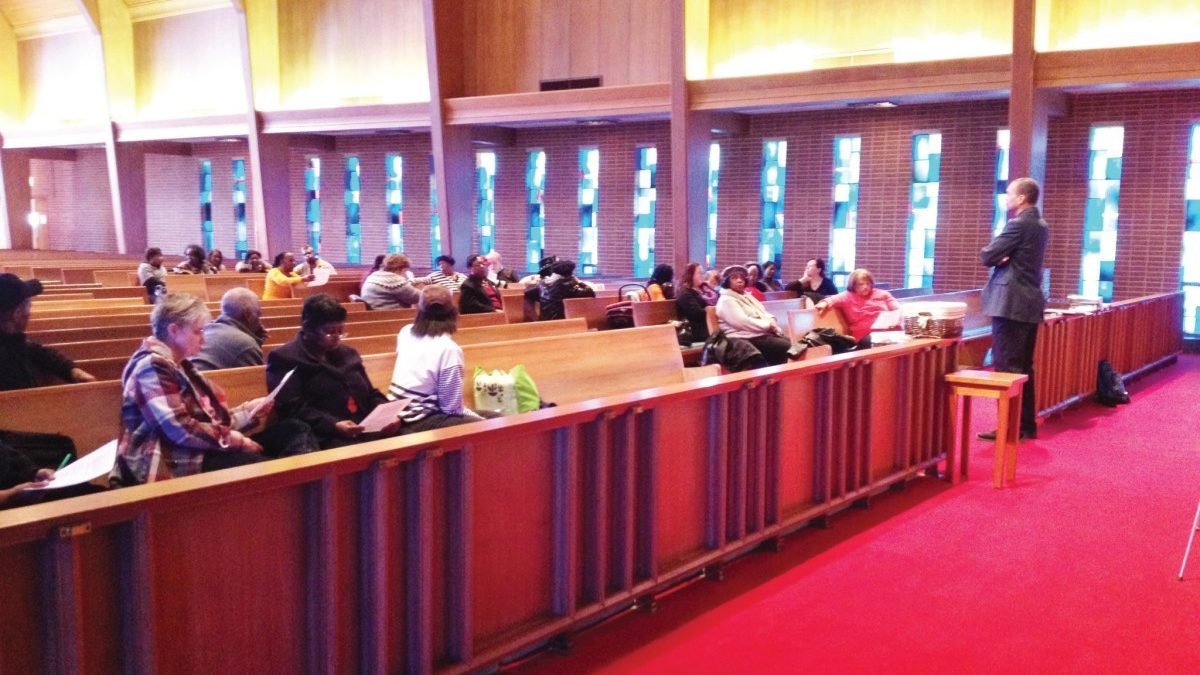 BY AMANDA ALLEY — “Martin Luther King Jr. saw the church as having a pivotal role in society,“ notes Rev. Joan Carter-Rimbach, pastor of First United Methodist. “It’s time for church to be the church again, and reach out to address the needs of the community.”

It was for this reason that an annual event has been created and sponsored by the church and Community Ministry of Prince George’s County, for the past four years. Almost 100 people gathered at the 2014 event to celebrate civil rights activist Dr. Martin Luther King, Jr. and consider  the theme of “Non-Violence: Education, Character, a Way of Life.” The various workshops and discussions focused on non-violent tactics as a realistic response to today’s social issues, especially those pertaining to youth.

The workshops were tracked for teenagers and adults. The teen workshop focused on the “Richmond 34” sit-in of 1960, when 34 students from the Virginia Union University protested segregation of lunch counters at a local department store and were later arrested.  Workshop attendants divided in groups, and created and performed skits showcasing how they envisioned the events and emotions of that historic local event. Michele Walton, a seminary student and teacher leading the group discussion, said this activity “gives students a chance to live that day’s events [of Richmond 34 sit-in] and ask…what are [we] willing to go to jail for?”

Meanwhile, the adults were assigned an equally thought-provoking task: Dissect King’s iconic “Letter From a Birmingham Jail” and discuss the differences and similarities between our current social issues and those King pondered during his time. It was an engaging discussion where members of the church and other locals could discuss concerns for their community and effective ways of resolving them.

While many of the event’s attendants were parishioners, many of the youth in attendance came from nearby group homes in southeast D.C. which provide assistance to juvenile delinquents. One teen, 17-year-old Marken Brown of D.C. said he “liked the fellowship and interaction and the fact that they [church] try to publicize racial issues from the past, because they still exist.”

Community Ministry, co-sponsor of the event, works with communities throughout Prince George’s county to assess and help meet the health and educational needs of the underserved. Executive Director Jimmie Slade, a retired Army colonel, believes “violence is trying to take out [our] youth. We must provide education [for] youth to respond to violence in a different way, so they can achieve their God-given potential.”

Harry Williams, a consultant with Community Ministry and attendant of the day’s workshops, also believes it’s important that individuals be held responsible by their community. In his experience working with youth, he has observed that “aggressive behavior is not innate, it’s a way of protecting oneself. [We need to] address character development: honesty, dignity, respect, a sense of presence. These are the building blocks of character. [King] exemplified these qualities with his decision to resist violence.”

The day ended with a lively service in the sanctuary with a sermon given by North Carolina pastor and renowned gospel singer Greg Drumwright. Afterwards, the community marched out of the church onto the church yard and posted signs along the streets reiterating the day’s theme, “MLK: Non-Violence: A Way of Life.”