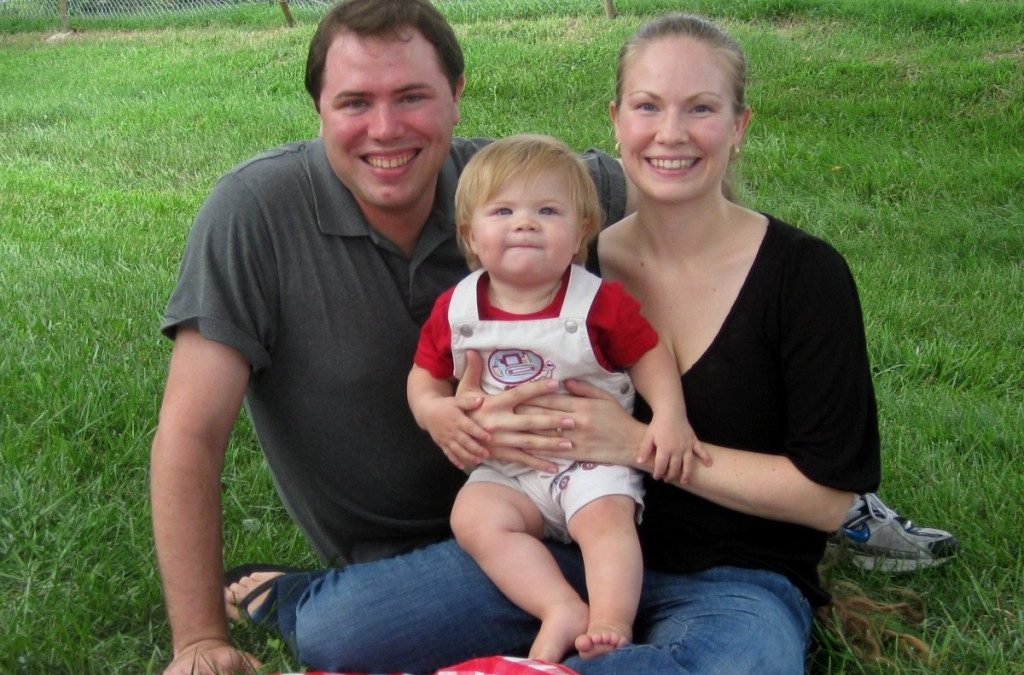 Merrill, Alan and Elizabeth Roberts. The couple wasn’t planning on a home birth, but Alan had other ideas. Photo courtesy Roberts family.
Hyattsville

BY SUSIE CURRIE AND AMIRA AYCOCK — In the not-too-distant past, having a baby automatically meant a lengthy hospital stay. But today, increasing numbers of women are bypassing the hospital altogether.

Midwife-assisted home births are on the rise, according to a 2010 study by the Centers for Disease Control and Prevention. In Hyattsville, there were 15 in the last year alone, according to Suzanne McGowan, a local doula who assists women during labor and delivery. She has attended births at hospitals, birthing centers and living rooms throughout the Washington, D.C. region.

“A woman can have a baby wherever she wants,” says McGowan, “and I’ve seen more women choosing to stay home for it.”

Why the increase? Reasons vary, but many mothers try it after having negative experiences in other settings. Peggy Burgoyne, a Prince George’s County native and Hyattsville resident, delivered her fourth child at home after having the first two in the hospital and the third in a birth center.

“The whole experience was impersonal and uncomfortable,” she said of her two hospital births. “I felt like I was fighting an uphill battle with the nurses, who were telling me I couldn’t do what I wanted to do with my own baby. It didn’t matter what I wanted.”

The birth center had closed by the time she and her husband, Alan, were expecting their fourth. “People kept asking me what my back-up hospital was, but I’d had three easy births, and I knew I was low-risk and everything would go fine. And it did.”

Jolene Bowman also decided against a hospital birth after having one.

“[Hospital] policies are made without any allowance for intelligent decision-making, or for your personal risk factors,” she said. “The hospital’s policy says you do this or that for every woman, regardless of her individual situation, and that’s what happened at my first birth.”

“She had extensive experience with all kinds of complications,” she said. Fortunately, she also had four-wheel drive; a healthy baby girl arrived weeks early at the height of Snowmaggedon.

“The midwife drove through the blizzard to get to us,” Bowman recalls, laughing.

Heather and Jacob Wood had planned to deliver their first child at Shady Grove hospital. But they switched two weeks before the due date, when the nurse-midwives they were seeing recommended more medical intervention than they wanted.

“I really wanted to try to have a natural birth, with no drugs,” said Heather. “And if they were already pressuring me to induce, what would the chances be?”

Still, before meeting the midwife, the couple was skeptical about giving birth at home.

“I had the idea that birth is a very complicated medical event and you have to have lots of medical equipment and personnel standing by. Also, it sounded pretty messy,” said Jacob. “The reality was none of those things.”

A healthy baby girl was born at home, in the nursery where she now sleeps, last May.

Elizabeth Roberts thought her firstborn would arrive in the Alexandria birth center where she’d been going for prenatal visits. As they were preparing to leave, her husband, Merrill, joked, “I’m just going to take this to car. Let me know if you see a head.”

“When he got back, I said, ‘Um, honey? I see one,’ ” Elizabeth recalled with a laugh. Twenty minutes later, she was holding her son.

One advantage she hadn’t foreseen was the convenience. “It was great being able to climb in my own bed and sleep for six hours,” she said. “Then we watched a movie and ordered Chinese. Like a normal day, except with a baby.”

The safety of home birth is a subject of heated debate. The American College of Obstetricians and Gynecologists and the American Medical Association contend that women put themselves and their babies at unnecessary risk if they choose to give birth at home. Uncomplicated births can become complicated without warning, and sometimes require emergency medical care.

But supporters say that routine hospital policies can lead to unnecessary interventions, putting mothers and their babies at risk for preventable and often serious complications. The American College of Nurse-Midwives and the World Health Organization support home birth for healthy, low-risk women, such as those who have already had complication-free deliveries.

“It’s not like a hospital birth is risk-free and a home birth is a tragedy waiting to happen,” says McGowan. “There are risks no matter what you do. But all the research so far indicates that a home birth with a qualified attendant is safe for most women.”

Currently, Maryland is one of 25 states that does not license CPMs, who learn their trade either in a midwifery school or in an apprenticeship. They are not nurses and therefore attend births in homes and birth centers only. Certified Nurse-Midwives (CNMs) attend nursing school and then specialize in midwifery, and, in Maryland, can practice in hospitals, birth centers and homes.

All photos are courtesy of the families.