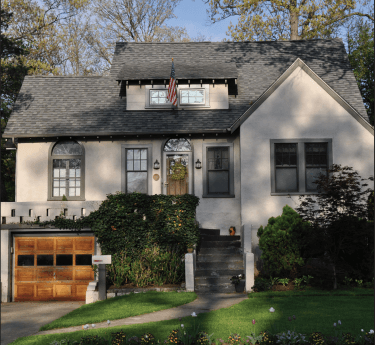 The event brochure explains: “Almost a hundred years ago the women of the Suffragette movement and their supporters were welcomed at Magruder Park by Mayor Harry W. Shepherd. To celebrate their achievement we dedicate this year’s tour to the many courageous women and men that took us all a step closer to equality.”

The nine homes open this year reflect a variety of styles and periods, from Tudor to Victorian to Cape Cod. Addresses are kept secret till the day of the event, but organizers say the tour will span a radius of approximately 1.5 miles.

Several of the featured homeowners take particular pleasure in the dedication.

“If those women had not done what they did, how would I be living? What would be available for me and my daughter?” pondered Jennifer Mendenhall.  She and her husband, Michael Kramer, are actors, and Mendenhall notes that their life reflects a flexibility in gender roles that would not have been possible 100 years ago. Depending on the performance schedule, either might be gone from home six nights a week, and the division of labor is completely upended from the more traditional families they grew up in.

They delight in preparing meals in the kitchen they remodeled in 2009 and 2010, which was part of a larger renovation project that also included adding glass doors on two floors. The effect, says Mendenhall, “is like living in a treehouse.” That was also when the couple, who are both also well-known for recording audiobooks, built an in-home recording studio. (It will not be open for touring.)

Mendenhall is looking forward to showing off the remodeling of their 1928 bungalow. “Anything that connects or informs us about how other people live is a good thing,” she said. “There are so many things that prevent us from connecting, anything that builds community is a good thing.”

Would she have been a suffragist had she lived here 100 years ago? “Absolutely,” says Mendenhall, “and so would Michael.”

Anne Healey, who lives just up the street in another house-tour bungalow, can draw a clear line from the work of the suffragettes to her own career. She has served as a Maryland State Delegate since 1990. During the recent legislative session, she was one of 56 members of the Women’s Caucus of the Maryland General Assembly that marked the centennial of another suffragist march that also stopped in Hyattsville on its way to the nation’s capital. In a special joint session on February 22, the women lawmakers all dressed in black with gold sashes to read proclamations that outlined the history.

Just as society has changed, so have the houses.  Anne Healey and her husband, Neal Conway, have lived in the home since 1979,  and Healey notes that,  “After doing many things – some of them 2 or 3 times – on a very old house, now seemed the time [to participate in the tour].”

One of the projects, getting rid of old paneling, turned up a well-preserved 1928 building permit inside the wall. It is now framed and hangs by the front door, next to the permit for a 1985 addition. The house was in bad shape when they bought it, and Healey describes that changes since as “an evolution – every year we did a little bit of something.”

Gina DeFerrari’s brick Cape Cod on Oliver Street features another sort of evolution. Six tiles along the front door form a mural depicting creatures such as jellyfish, trilobites and lizards from the Precambrian to the Jurassic eras. DeFerrari made the tiles herself, and she makes the process sound simple enough: “Get a bag of clay, roll it out, carve it, glaze it and fire it.”  Another tile display is over the fireplace.

She has also added solar panels, a screened gazebo, and ponds with waterfalls. DeFerrari, who attended a Horticultural Society meeting and was told the house tour was looking for gardens to showcase.  When Carol Papagiannis, HPA’s 2013 House Tour Liaison and HPA President Gloria Felix-Thompson met with her they persuaded her to put her home on the list too.  “I was just thinking about displaying the garden when they came and complimented me on the home as well.”

DeFerarri has attended past tours and found it a great way to see what people have done. “You get inspired to do so many things in your own place by what others have done.”

Another garden will be on display at the home of Kevin Oakley and Tony Conto, who have lived in their Craftsman-style bungalow on 42nd Place for 2½ years.  When they first looked at the home, the well-established but somewhat neglected garden was a key selling point. There was clearly “purpose to the planting,” notes Oakley. “We love re-establishing the yard as our own.”

Just prior to settlement, Oakley learned that the house was the home of former mayor Mary Prangley. Prangley joined the city council in 1977, succeeding her husband, and went on to serve in local government for 22 years, ultimately becoming president of the council and then mayor from 1995 to 1999.

Oakley said that hearing it referred to many times as “the Prangley house” made him feel as if they were “inheriting an estate.” Oakley notes that while they appreciate the history, they are participating in the tour more “out of respect and appreciation for the Hyattsville community that binds us all.” As they put down roots, both literally and figuratively, the pair joke that the home may someday be known as the “ContOakley home.”

Homes will be open from 1 to 5 p.m. on May 19. Tickets are $12 or $10 when purchased in advance from locations listed on HPA’s website, www.preservehyattsville.org. The tour will start at the Hyattsville Municipal Building at 4310 Gallatin Street.  For the convenience of visitors, the city will provide a bus that continuously circles the route.