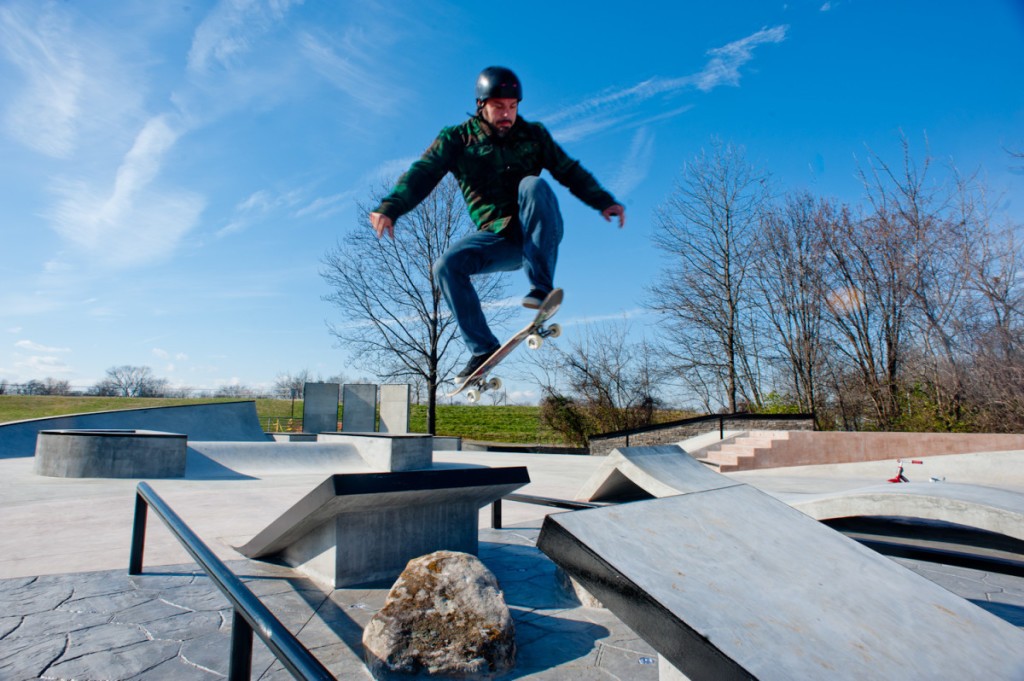 BY SUSIE CURRIE — The last of the concrete has dried at Hyattsville’s newest attraction, Melrose Skate Park. And although there is still work to be done before it officially opens – putting in a basketball half-court, installing a bike rack and benches, landscaping – that’s enough for some younger residents.
Designed for beginner-to-intermediate skateboarders, the course can also handle “bikes, scooters, just about anything they want to ride,” said construction superintendent Don Wimer of American Ramp Company. The Missouri-based company, which bills itself as “the world’s largest skate park provider,” also installed Mount Rainier’s skate park in 2009.
A project of the Maryland-National Capital Park and Planning Commission, the new amenity is part of the 3.4-acre park  at Rhode Island Avenue and 41st Place, near the city’s southern border. It’s on the Northwest Branch Trail, overlooking the Anacostia River.


The course of undulating concrete and sweeping ramps looks like it would be right at home in the Hirshhorn Sculpture Garden. But these flourishes – with names like “tailwhip,” “flared pyramid,” “bent penny” and “hubba” – aren’t just for show.
The biggest attraction, said Wimer, is likely to be something called a “dragon-wing quarter-pipe,” which features a curved lip and is five feet at its highest point.
Three vertical slabs of concrete next to it will become a mosaic depicting native shad and herring, a nod to the fish ladder just beyond. Mount Rainier artist Valerie Theberge, who has done several public art projects, expects to complete the glass-tiled mural installation by mid-December.
After that, said M-NCPPC landscape architect Chris Colvin, work on the basketball half-court should begin. Previously, there had been a full court at the park, as well as an adjacent soccer field. A summer 2008 survey concluded that a half-court would “accommodate most [basketball] use that occurs.”
In 2009, the city used a state grant to upgrade the soccer facilities, purchasing new equipment and bleachers and adding a pedestrian bridge.
Contractors began installing the skate park in early October and had until December 9 to finish. After half-court is completed, said Colvin, landscapers will add a bioretention area, shade trees and flower beds. The trail, which used to run behind the basketball court, will be realigned closer to the street.
Eventually, that trail will be connected to the neighborhood with the Melrose Access Trail, which is planned to run from the service entrance at 41st Place up to Crittenden Street.
So far, county officials haven’t pinpointed an opening date. Based on normal projected construction schedules, said Colvin, the park would open in March “as long as the weather holds” and the asphalt companies stay open.
“It’s been so mild. This time last year there was snow on the ground,” he recalled. “We had to shut down construction on a couple projects for months, waiting for asphalt.”
It’s the fourth skate park in the county, with others in Bowie, Greenbelt and Mount Rainier. Soon to come are ones in College Park and Clinton.
Tags #M-NCPPC #Melrose Access Trail #melrose skate park
Previous

The science of the city: Two bets on public bathrooms