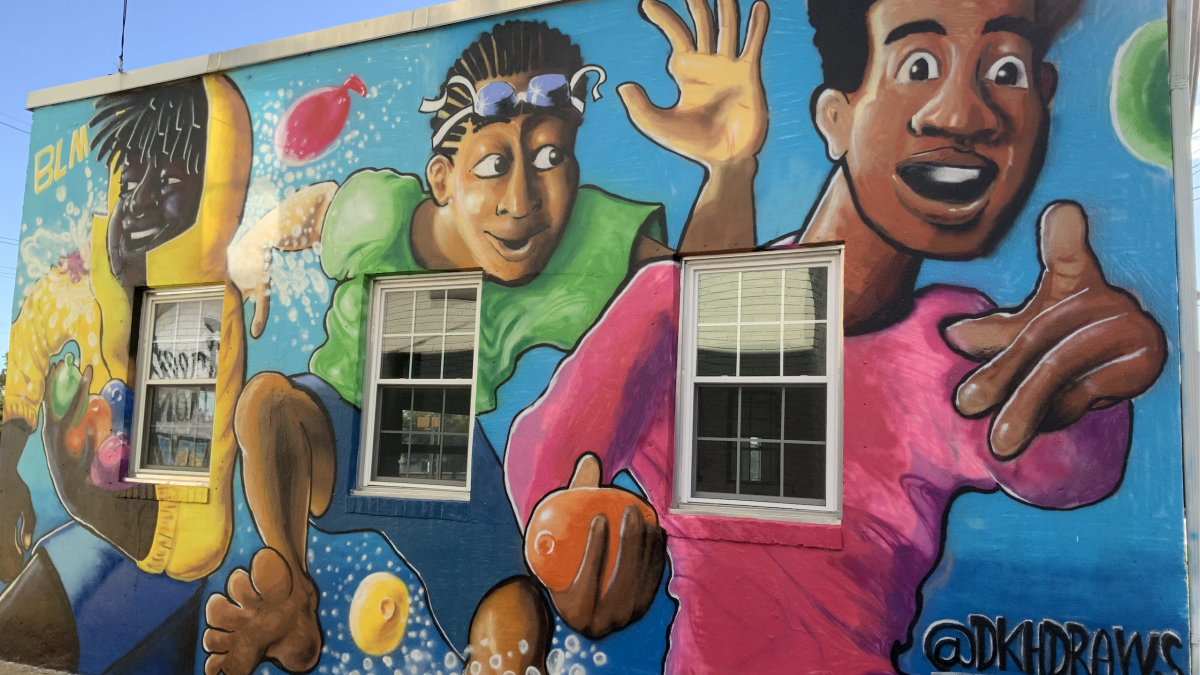 By Talika Gorski and Delia Silva

This Halloween has been very different. Fewer kids trick-or-treated. Not many houses gave out candy. Reporter Delia Silva interviewed Nicolas Regotti, 12, and Michael Regotti, 9, whose family’s plans had changed significantly due to the coronavirus. The family mentioned that they did not trick or treat and, for the first time, their kids didn’t put on costumes, but they were OK with it. Their plans also changed because they were going to have a Halloween party, but couldn’t. But the family enjoyed the holiday, because they made a fire pit and had s’mores and invited their friends. Even in a pandemic, people can have fun.

The Gorski family dressed in costumes and visited the SoHy Sidewalk Saturday on Halloween. There were many tents set out on the sidewalk by shop owners and a portion of the road was blocked off to walk on. There were things for sale and candy set out on tables. Talika Gorski reports, “We did slightly change our costumes to accommodate masks. My brother had a special yellow mask with red cheeks and a black nose for his Pikachu costume, and I was wearing a black one to match my costume, Hermione from Harry Potter.”  The family also held an indoor scavenger hunt for candy and attended an outdoor Halloween party at a friend’s house in Hyattsville. They saw many new creative methods of candy giving nearby, including a long green chute decorated with skeletons that was used to slide candy into the trick-or-treaters’ bags. Gorski adds, “I miss regular trick-or-treating, but now we have new Halloween traditions.”

There’s a new mural in town! Water Balloon Dance, by Daniel Katz-Hernandez, is between K&W Auto and Streetcar 82 near Route 1. Inspired by the Black Lives Matter movement, it shows three black kids having a fun water balloon fight.

On his website, DKH Draws, the artist says, “For those three black characters I visualized and painted, it was my hope that the image of play, laughter, and camaraderie would assist in expanding the positive image of black young men and the community.”

I think he succeeded in that vision and represented it well. I liked the details that he added, like how the boy on the left has a raincoat and an armful of balloons and how all the kids are wearing summer gear and water stuff.  One kid even has goggles. Another is pointing at an incoming water balloon. I love the attention to detail in this painting. It really makes it seem more real.

As a kid myself, this really speaks to me and shows that all people enjoy having fun with others, no matter where they live or where they are from.

Anacostia Bioblitz: Species in Your Neighborhood
By Nora Marx and Irene Vaidyanathan

The Bioblitz, which took place from October 15-18, is an annual community environmental event held by the Anacostia Watershed Society (AWS). During the Bioblitz, members of the community go into any part of the watershed and document species they find over a short period of time by submitting photos via an app.

According to their virtual introduction, the Anacostia Watershed Society’s purpose in hosting the Bioblitz is to have a “census” of the species in the watershed and to help people living in the area to “build a relationship with the river.” It also helps children and adults learn to be better observers by encouraging participants to “get in close and pay attention.”

The AWS Bioblitz was first held in 2018 both online and as a public event. While some Bioblitzers used the app iNaturalist independently from home, the public part was held at Kenilworth Aquatic Gardens for a few hours. There, a team of naturalists helped people to identify the encountered organisms, and the photos of the organisms were submitted to the Biodiversity of the Anacostia group within the app.

This year, even though the pandemic eliminated the public meetup, iNaturalist reported over 3700 observations during the two weeks containing the Bioblitz dates.  Participants submitted many kinds of plants, fungi, and insects, in addition to the more commonly reported species such as the American Robin, the White Tailed Deer, and the Eastern Gray Squirrel.

The Bioblitz was a good introduction to using iNaturalist for kids and families who want to learn more about the environment around them.  “I found it fun because we went looking in places I had not been before, and found plants and amphibians in their natural habitats,” says  Ella Williams, a student at Eleanor Roosevelt High School, who participated in her first Bioblitz this October.

Feeding the youth who may otherwise go hungry