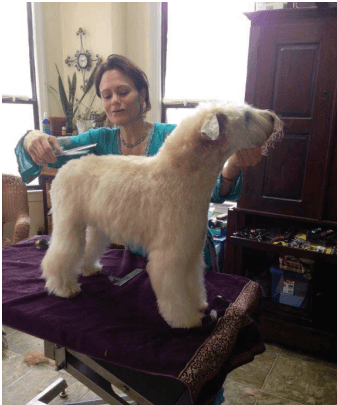 Cassandra Kraham, a pet groomer in the Washington area since 1997, specializes in terriers, like Checkers, a Wheaton Terrier. Photo courtesy Paws of Enchantment.
Hyattsville

For decades, Chichie’s Pet Boutique had the local dog-grooming market pretty well cornered. Owner Odessa McDaniels can still remember the day she and her husband Michael opened their business at 3114 Hamilton Street: “March 3, 1972,” she said in a recent interview, while putting the finishing touches on a Shih Tzu.

But now the venerable West Hyattsville business has some competition from the other side of town. The pet-grooming industry is growing nationally, and in the past several years that trend has also been evidenced by three new businesses on the Route 1 arts corridor.

The oldest of these is the holistic pet spa Paws of Enchantment, at 3415 Perry Street, which moved to Mount Rainier six years ago from Takoma Park. Cassandra Kraham started the business there, inside The Big Bad Woof’s original location.

These businesses offer pets many of the services salons and spas offer people:  mud facials, baths, shampoos, hair cutting and styling, and, in some cases, a place to stay for the day (or longer).

Although the salons are clustered in a relatively small area, none of the owners said they saw each other as competition. Besides, notes Grooming by Em owner Emily Mansilla, “There are a lot of dogs in the area – plenty to go around.”

Indeed, 62 percent of U.S. households owned a pet in 2012, compared to 56 percent in 1988, according to a survey from the American Pet Product Association. The pet grooming and boarding industry has seen revenue rise each of the last 15 years to $4.7 billion in 2012, according to IBISWorld, an industry-based research organization.

The local businesses have a unique focus and differing attitudes toward expansion. The services they offer differ enough that each business has managed to carve a comfortable niche.

Mansilla has pursued growth most aggressively of the three most recently launched salons. She estimates that she has more than 150 new clients so far this year, offering them the latest and widest selection of grooming services.

Kraham, owner of Paws of Enchantment, offers holistic services such as acupuncture and chakra balancing for the pets, while Paw Zen owner Leslie Riley focuses primarily on self-service washing, giving owners the space and instructions to wash their own pets while offering a bare-bones grooming service in response to customer demand.

Prices among them vary almost as much as the services they offer. Mansilla strikes a middle ground, charging between about $40 to $90 for grooming and $20 to $60 for a wash, depending on pet size. Riley charges less than half that because customers do a lot of the work, and Kraham’s prices can be more than double for rarer holistic services. At Chichie’s, the $70 to $125 fee includes bathing, grooming, nail trimming and ear cleaning.

Most pet owners handle animal hygiene themselves. But the growth of such businesses suggest that many others are happy to outsource.

“It all depends on the dog’s temperament,” said Grace Adams, an employee at Hyattsville’s Big Bad Woof (slogan: “Essentials for the Socially Conscious Pet”).

Or, perhaps, the owner’s skill level. “I’m awful at washing my own dog,” said Carolyn Agan recently as she waited in the Grooming by Em lobby. “So it’s great to have someone else do it.”

Another bonus: the range of services. Agan said that she loves having all the options. “Maybe next week I’ll dye her hair!”

Hyattsville Life and Times, 6 years ago 3 min read
From the Editor

Hyattsville Life and Times, 2 years ago 2 min read
Beyond Hyattsville

Path between College Park, Riverdale now open for use