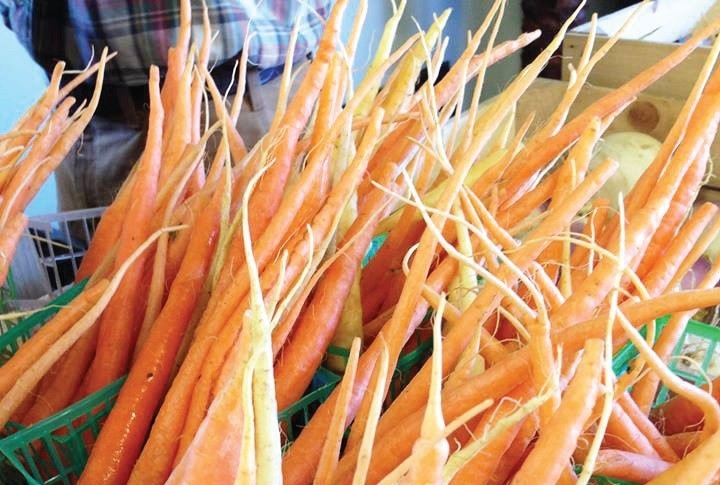 BY CAROLINE SELLE — It can be hard to find local food in the winter months. Most farmers’ markets shut down for the season, and only the most intrepid of gardeners are able to keep their vegetables flourishing through the cold. Even winter Community Supported Agriculture (CSA) programs are scarce.

“I love to have good prepared food [for sale],” said Market Coordinator Jim Coleman. And with the array of vendors present at the winter market, the components for fresh, local meals were all there. “All I had to do was find mustard,” he said, and the sausages were ready to eat.

The Riverdale Park Farmers Market has been a staple of the Route 1 Corridor since its founding in June 1998. Coleman got involved in 2006 and has been coordinating the market ever since.

In the summer, in the parking lot across the street, the Riverdale Farmers’ Market has an abundance of vendors selling local produce, prepared food, wine, starter plants, and crafts such as soap. Winter pickings are a bit slimmer, but Coleman works to make sure a full range of goods are available.

Farmers in the mid-Atlantic region have few incentives to grow food through the winter as consumers turn to readily available (and out of season) grocery store produce. “Our winter “market ecosystem” is nowhere near as developed as, say, it is in New England and the Maine area, where they’ve been doing this for decades,” Coleman said. This is one of the reasons it can be so difficult for consumers to find locally sourced winter food.

“We like the market because we like to support the local folks,” said Matt Gifford. On the first Thursday in February, he and Sonia Keiner attended the winter market for the first time to sell Keiner’s mother’s hand-knitted scarves. They’re normally customers of the summer market, which Gifford called a “one-stop shop.”

Loyal winter market customers will know Coleman uses the slower winter season to experiment and see what might work year-round in future years.

The sausages are one new initiative. Coleman is also trying to get more preserved food into the market. “One of the things I’ve been pushing with my farmers recently i

s value-added produce,” he said. Value-added produce includes sun-dried tomatoes, dried fruit, and items like jams, jellies, pickled vegetables and canned tomatoes that can be produced in the summer and sold in the winter. “We need the new generation of farmers to step up so that we are ready when the winter comes.”

Just as the produce changes in the winter, so does the feel of the market. “I think my favorite part is the intimacy of the winter market,” Coleman said. “It’s very much a person-to-person experience. You get to know your regular winter customers.”

And winter customers get to know the food. Coleman’s favorite winter product is Gold Rush apples, which don’t stand out much in September, October or November. “They’re a funny apple,” he said. “You can get them in the fall, but they actually have to sit in a cold area for two or three months before they fully develop their flavor.” It’s December, January or February before they become, as Coleman put it, “the apples that they are meant to be.”

The Riverdale Park Farmers Market is held every Thursday from 3 to 7 p.m. From March to November, the market is held outdoors at 4705 Queensbury Road next to the Riverdale MARC train station. From November through March, the market moves indoors to the Town Center Market across the tracks.

Cultural Connections: Longing for belonging – from India to the US