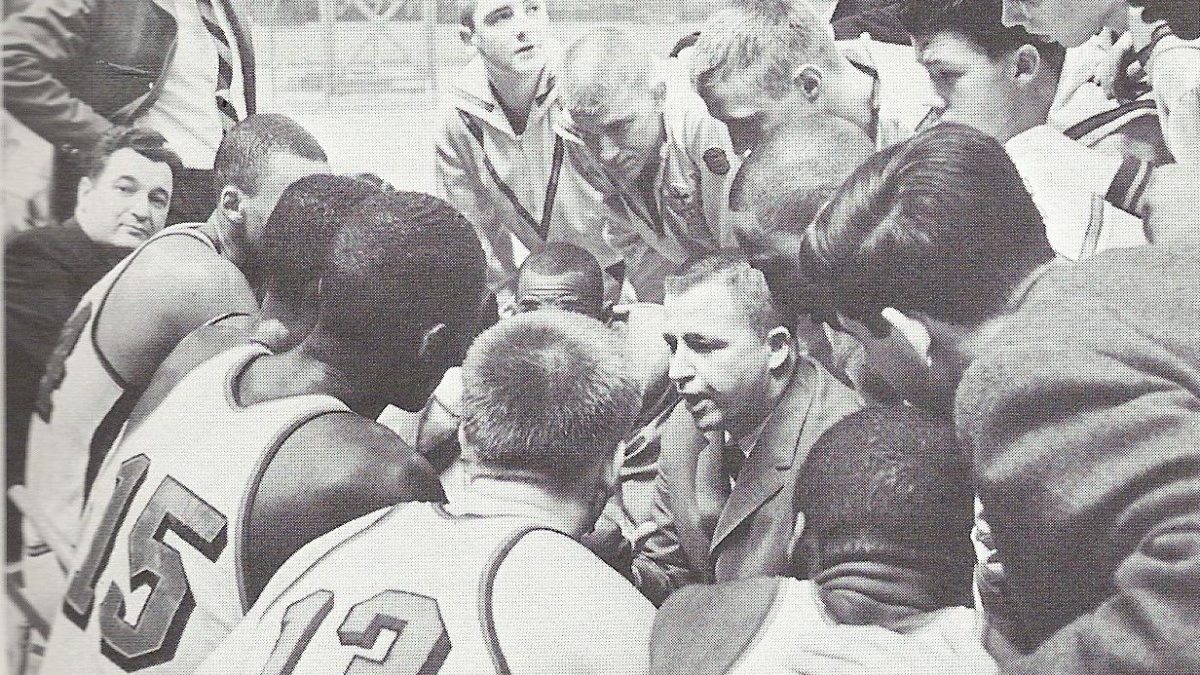 BY CHRIS MCMANES — Whether current members of the DeMatha Catholic High School basketball team know it or not, much of the success and benefits they enjoy today can be traced back 50 years to a basketball game played about three miles north of DeMatha in College Park.

On Jan. 30, 1965, the DeMatha Stags ended Power Memorial Academy’s 71-game winning streak at the University of Maryland’s Cole Field House and handed 7-foot-1 Kareem Abdul-Jabbar —  then known as Lew Alcindor —  the only loss of his prep career.

The Washington Post, The Washington Star and The Washington Daily News all previewed the game with front-page stories. Every TV station in town featured the encounter before and after. Writers and photographers from Time and Newsweek magazines showed up, and even The New York Times devoted space to it.

“Up until that point, high school basketball wasn’t really that well known throughout the nation. Everything was kind of isolated,” said Morgan Wootten, 83, who coached DeMatha to victory that snowy Saturday night. “But this game just jumped up so high, was so nationally covered, that all of a sudden high school basketball became more important.

“It took the game from a quiet locality and injected the great players and the great teams to national attention. So it was, in that way, the greatest high school basketball game ever played.”

On Friday night, January 30, DeMatha will celebrate the 50th anniversary of their 46-43 victory with a 7:30 game against Bishop Ireton. Most of the 1964-65 team members will join Wootten in reminiscing about that seminal victory. CBS sportscaster James Brown is coming to help produce a feature story on Wootten for 60 Minutes Sports. Brown played for Wootten before attending Harvard.

Friday’s festivities will include a 15-minute video commemorating the game and a halftime introduction of the players and staff. The former Stags should be proud of the current edition they helped lay the foundation for a half century ago. DeMatha (19-1) is ranked No. 1 in the Washington area and No. 6 in the country.

The game will be played in Morgan & Kathy Wootten Gymnasium, the 1,200-seat centerpiece of the LT (SEAL) Brendan Looney ’99 Convocation Center. Tickets ($5) are available.

Mike Jones, who succeeded Wootten after the Hall of Fame coach concluded his 46-year DeMatha career in 2002, agrees that the win over the Panthers continues to reverberate throughout the program. The Stags play nationally prominent teams and have this year played in Arizona, Massachusetts, Georgia and Florida. The basketball program is sponsored by the footwear, apparel and equipment giant Nike.

“Many people [say] that’s the game that put high school basketball on the map,” said Jones, who played and coached under Wootten. “So a lot of the things that we’re afforded today — the trips we’re taking, playing across the country, the games on TV, as well as a lot of people’s jobs with recruiting sites and things like that —  a lot of that is owed to the Power Memorial-DeMatha game back in 1965.

“It has definitely had a positive effect on the program.”

The 1965 game was a rematch of the 1964 tilt between Power and the Stags. Tied at 62 with about 30 seconds to play, Charlie Farrugia took a backdoor pass from Jabbar, scored and was fouled. He converted the free throw to give the Panthers a 65-62 victory. The game marked the first sellout (12,500) in Cole Field House history.

DeMatha’s biggest expenses for the 1964 and ’65 games were, according to Wootten, $2,500 to rent Cole Field House and $3,000 to pay for Power’s travel costs from New York. Tickets sold for $1 (student), $2 (general admission) and $2.50 (reserved). The Stags’ team moderator and then-priest Lou Amico took thousands of dollars with him back to DeMatha in 1965.

“I had the money stuffed in my overcoat, pants and jacket,” Amico, 87, said. “I wasn’t prepared; I went to collect the money after the game at the box office, and I didn’t have any kind of satchel or anything, so I stuffed everything in different pockets. My overcoat was filled up, my pants, my jacket. I was really in bad shape.”

“Then I walked out the door and everybody was gone. I didn’t have a ride. One of the parents pulled up and said, ‘Do you need a lift?’ I said, ‘I sure do,’ and he took me home.”

Some of the game action and crowd reaction is available on YouTube.

Chris McManes (mick-manyz) coaches boys basketball at St. Jerome. His coaching philosophy is built upon what he learned from Morgan Wootten and the late Joe Gallagher.

Not all hope is lost for the Purple Line

Aviation museum is cleared for takeoff