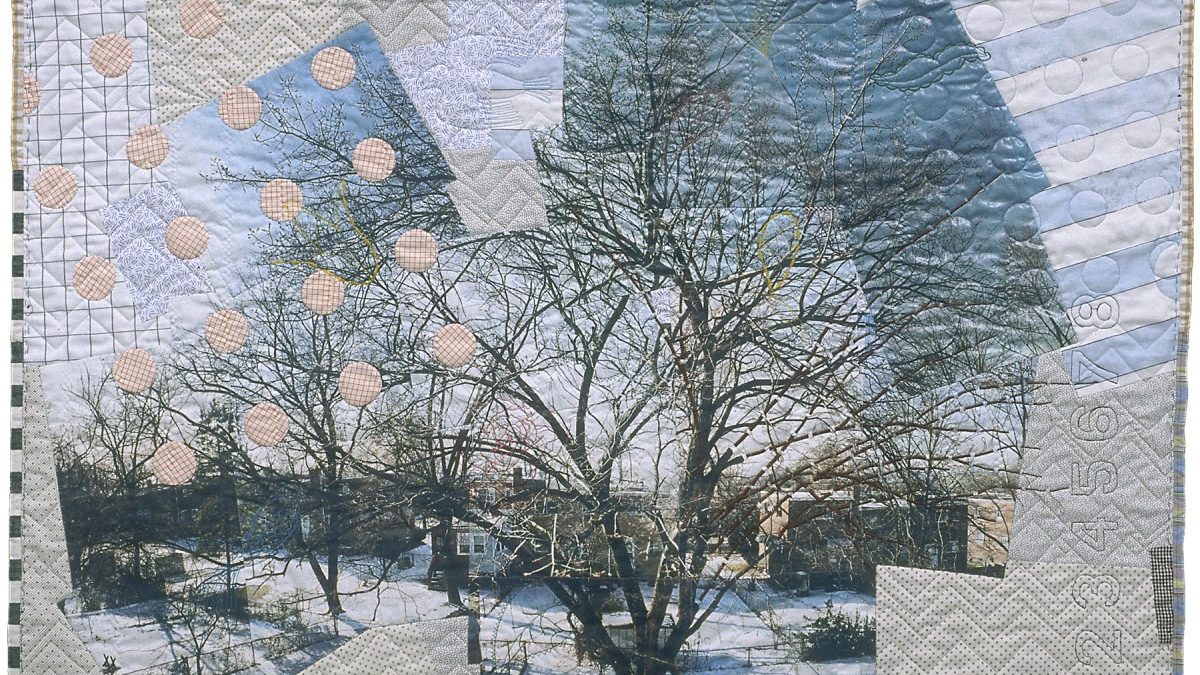 BY REBECCA BENNETT — The Hyattsville Municipal Building is usually bustling, but when a recent city advisory committee meeting was postponed, it left the Prangley Room on the 2nd floor empty, quiet and dark.  That’s when Scott Wilson, a former city councilmember, took a closer look at the art hanging on the wall.

The piece titled “Good Fences Make Good Neighbors” is a mixed media quilt featuring a tree under a blue sky.  The first question asked was: Where could this photo have been taken? After determining it was in West Hyattsville, the next question was: What is with all of these interesting shapes and numbers stitched in here?  There was a rose, some added tree branches and numbers running up the side.  And: Who made this quilt in 1996?


That was not an easy question to answer, as the stitched signature was a puzzle.  There was an “i” and a “t,” then maybe an “h.”  But, were those “n’s” or “r’s”?   Maybe one of each?  The name was unique enough that a quick internet search for the known letters returned it’s local creator.  It was Pat Autenrieth, a mixed media artist, whose works have been exhibited nationally and internationally, according to her website.  HL&T asked Autenrieth a few questions about this quilt:

1. How did this quilt wind up being in the Prangley Room of the Hyattsville Municipal Building?

Marge Wolf was the city administrator then, and was interested in the arts and pushed for the city’s purchase of this work. I believe she saw it at a local exhibition – “Confluence,” at Riversdale Mansion, if I recall.

2. What is the scene that we see? Is this your backyard in West Hyattsville?

The scene is indeed my backyard in West Hyattsville, though the tree has since died and been removed. I really miss it.

3. Neighbors/fences: what is your take now?

I have nothing new to consider about the piece, aside from the technology–the photo images are copier transfer, but now I can print directly onto fabric with an inkjet printer. Not so then.

4. There are a few stitched designs in the picture of the whole. For example, a rose. What are the meanings to these, if any?

The stitched designs-the rose, a bird, a tulip shape, a paisley, and other decorative items are typical of what would be included in a traditional Tree of Life quilt, though stitched here instead of the traditional appliqué. The numbers and polka dots I use repeatedly in all my work. However, the dotted lines in the tree indicate where I imagine the branches would be if my neighbor (now dead, but otherwise a great neighbor) hadn’t ripped off the branches at the fence line–as is his legal right. This happened years before I moved there, but the jagged stumps remained as evidence of his actions. I bought the house in the spring, but not until winter, after the leaves fell, did I notice the damage.

PHOTOS: More than 4 inches of snow on a Saturday afternoon

Deforestation along the Paint Branch Trail