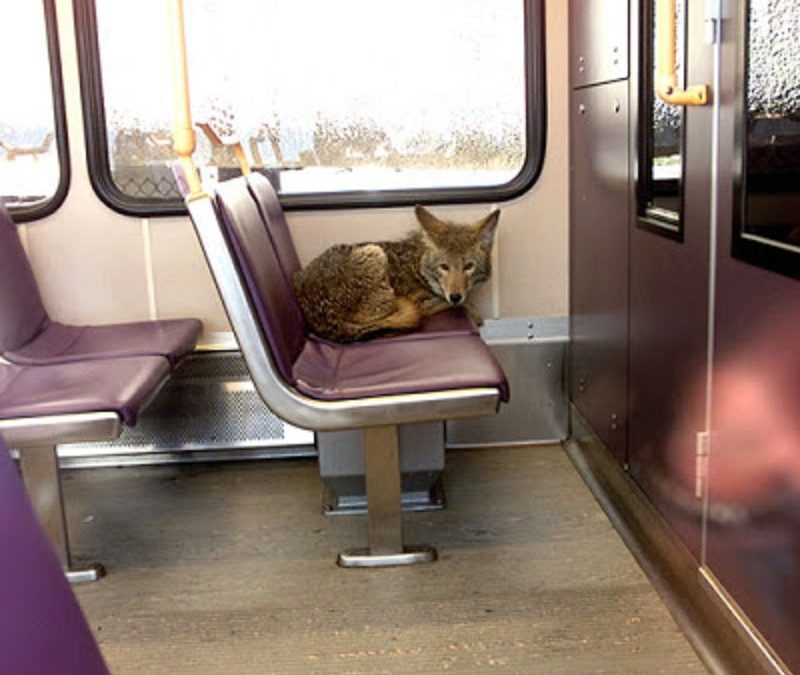 BY FRED SEITZ — Early in July, a character known as the Trickster in Native American lore visited a Hyattsville backyard not far from the West Hyattsville Metro stop. Homeowner Marybeth Shea, a trained forest ecologist, easily recognized the animal as a coyote rather than a fox or large dog. The visit was cut short when Shea threw a trash-can lid to drive it out of the yard.

Such visits have become more common, not only in the Washington, D.C., area, but many metropolitan areas nationwide. (In Oregon a few years back, one even managed to board the light rail at Portland International Airport.)

Coyotes are the closest relative of the gray wolf, a former resident of the East, but now extirpated in most eastern states. Coyotes are far more adaptable than their larger relatives: The intensive campaigns to poison and hunt them out of existence has not been successful, as the coyote still flourishes throughout North America up to the Arctic circle. The Maryland Department of Natural Resources has confirmed that coyotes are present in every county in the state.

This amazing ability to survive reinforces the coyote’s nickname as “God’s Dog.”  This characteristic is also recognized in some Native American tales where the coyote has eluded hunters and helped protect the earth and coyotes were identified with special status of cleverness and stealth.

Coyotes are roughly the size of a large dog, such as a German shepherd, but typically have longer ears and legs.  Weighing between  20 and 50 pounds, they often mate for life and produce a litter of about five pups in May. Their den, used only when giving birth and nursing young, may be a large hole, sometimes a commandeered groundhog den.

It is believed that when wolves were hunted to near extinction in the East, coyotes occupied much of the environment previously held by wolves. Some of the wolves in Canada and the northeastern U.S. may have interbred with the coyotes, producing a somewhat larger coyote than those found out west.

The Eastern coyote is still considerably smaller than the grey wolves in Canada and western U.S and somewhat smaller than the  red wolves in North Carolina.  Coyotes view domestic dogs as competitors and kill some Fidos, but in some situations, coyotes have also bred with domestic dogs to produce hybrids.  (Don’t expect a coypoodle anytime soon, however.)

Coyote packs typically are limited to the male, female and offspring. Wolf packs, headed by an alpha male and female, can become considerably larger — which helps when hunting big game such as moose or caribou.

Coyotes will sometimes take deer, but they are less skilled pack hunters than wolves. (For example, one  Montgomery County wildlife professional has photographed coyotes being pursued by deer.)

Instead, they usually stick to smaller prey, like rabbits, rats and woodchucks. Coyotes do have a long history of preying on sheep and other domestic livestock, though, which may be why they are seen less as beneficial “trickster” and more as a threat to eliminate.

Indeed, the federal Department of Agriculture spends about $115 million annually to trap and poison the animals. But neither method has reduced the coyote population, and may instead pose dangers to pets and children. Some “pro-coyote” organizations have urged the USDA to study the ecological and economic costs of the poisoning and trapping campaign.

Their presence in urban areas is, in part, due to our continued encroachment on wooded and meadow areas, as well as the abundance of food we discard (or provide) for coyotes and other animals.

Much of the urban coyotes’ diet consists of our garbage, outside pet food and — occasionally — pets, especially outdoor cats and small dogs.  Incidents of coyotes attacking or harassing humans are rare.  If you encounter a coyote, making loud noises or throwing something at the animal will usually scare it off.  More critical is keeping cats and other pets inside, especially at night, and securing garbage and pet foods .

While I have only seen one coyote in Hyattsville (some years ago), I have occasionally heard the coyote yips and calls (sometimes answering sirens).  We may want to consider the approach of coexistence with these fascinating survivors, and enjoy the visits from “God’s Dog.”

Nature Nearby: Fireflies light up our nights