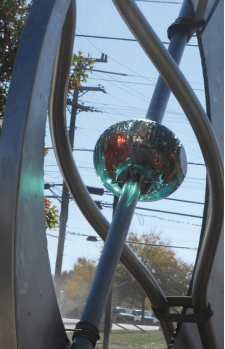 The Gateway Arts District received one of the state’s top two Arts & Entertainment District awards at a June 4 ceremony in Baltimore.

Accepting the Maryland State Arts Council’s 2013 Award for Outstanding Achievement were the executive directors of the two Community Development Corporations that manage the area: Stuart Eisenberg, of the Hyattsville CDC, and Carole Bernard, of the Gateway CDC. The other district to win was Silver Spring’s.

More than 300 sculptors, painters, musicians and other artists live in the Gateway Arts District, which became the first of its kind in 2001 under a program started by the Maryland Department of Business and Economic Development. The area extends throughout the communities of Hyattsville, North Brentwood, Brentwood and Mount Rainier along Route 1 between Oglethorpe Street and Eastern Avenue, the D.C. border.

The accolade “recognizes the collective growth of enhanced public facilities, new restaurants, incoming housing, and increasing tenancies along the Route 1 Corridor,” according to a statement issued by the two CDC directors.

“This award can be attributed to many years of commitment, collaboration and hard work,” said Bernard, adding that it was “a testament to the amazing people, businesses and programs that make the Gateway Arts District a unique and creative place to be, while also ensuring a sense of place for all four towns.”

Eisenberg considers the the Gateway Arts District an invaluable part of the greater Hyattsville area because it “attracts new businesses and retains talented people in our community.” Another benefit, he says, is that area residents are exposed to a wide variety of the arts.

And, he says, such districts “make it easier for artists to make a living,” in part by offering affordable housing for qualifying artists. Then, when these residents create and sell their collections in the designated district, they may be eligible for tax incentives.

The culmination of these opportunities eases the financial burden many artists face, allowing Hyattsville and the surrounding areas to help maintain artistic stability.

This stability benefits the area, Eisenberg says, simply because “people are attracted to an area with a lot of art.”

And that means area restaurants such as Busboys and Poets reap business gains. Other retail spaces, too, benefit from having more potential customers in the area.

Humans of Hyattsville: Life under COVID-19

Streetcar Suburbs Publishing, 1 year ago 6 min read
From the Editor

From the Editor: When ‘work bliss’ can lead to burnout