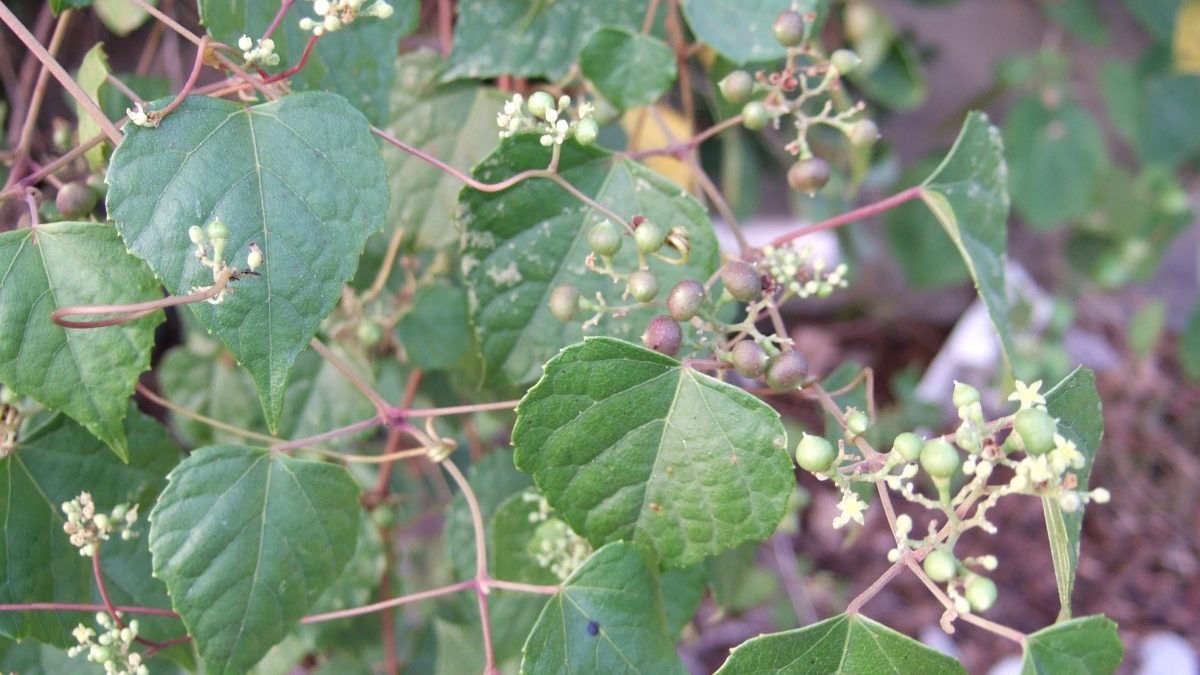 Porcelainberry can be identified by cutting a stem to see if it's white inside. <a href="http://commons.wikimedia.org/wiki/File:Ampelopsis_brevipedunculata_var._hancei_soann-pho-to_001.jpg#mediaviewer/File:Ampelopsis_brevipedunculata_var._hancei_soann-pho-to_001.jpg">Photo courtesy Albert from Wikimedia Commons.</a>
Hyattsville

My family and I bought a nice old house in Hyattsville and are happy to have a ready-made garden with nice trees and shrubs that shouldn’t need more than occasional fertilizing and watering. There are azaleas in front, hydrangeas in back, and what seem to be dwarf crepe myrtle. This sounds like a carefree situation, except that in addition to the ornamentals, there is a vine that looks to me like wild grape but acts like kudzu. It grows very fast and is very hard to tear out. It’s a constant chore to tear it off the shrubs it’s determined to strangle. I have heard that you are adamant about keeping poisons out of gardens, but in this case isn’t an herbicide what is needed? I’m ready to bring out the big guns!

What you describe is almost certainly porcelainberry aka Amur peppervine  If it were our own native wild fox grape, it would not act like kudzu and its roots wouldn’t be so deep. My mentor on plant recognition, Lady Aster, suggests that you cut a stem open: If the inside is white, it is porcelainberry; if brown, it is fox grape.

Porcelainberry was introduced into the United States from northeast Asia in 1870 as a landscaping vine. It is indeed very beautiful, with its clusters of berries that change from white and pastel shades of yellow, pink and mauve to the richest tonalities of green, purple and blue. Once again, as with water hyacinths, someone was seduced by a beautiful exotic plant and didn’t foresee that without the checks and balances of its native habitat it would become a dangerous pest.

As you may be aware, Southern farmers were actually paid to plant the notorious kudzu in the 1930s and 1940s on the assumption that it would enrich depleted soils the way the peanut had. Although it is good forage for animals and can be used for basket weaving, it would take a George Washington Carver of kudzu to make it into a viable crop rather than the scourge of the existing Southern vegetation.

The porcelainberry rivals it in rampancy, thanks to the birds who enjoy its fruit and distribute the seeds everywhere. Now, I don’t like to criticize my feathered friends, who are not only beautiful and tuneful but essential as pollinators and insect-devourers. However, it must be noted that birds are also quite partial to the berries of (read: responsible for the spread of) poison ivy and the lyme-tick-harboring bush honeysuckle.  No species is perfect. As a result, it’s up to us to replace the invasive species with other berry-bearing plants.

I am sorry to say that even my most ecologically responsible sources agree with you that for the larger vines – those impossible to eradicate even with an efficient spade – a topical application of a Triclopyr and glyphosate-based herbicide to the base of the stem after cutting is advisable. Dr. Mala Hierba mixes it with an equal volume of diesel fuel and paints it on with a small brush or swab – and she wears gloves, a mask and long sleeves to protect herself. She says basal oil or kerosene are also effective mixers, but advises that the most important aspect of this process is careful application.

Don’t use a spray, which could drift and contaminate other plants. Don’t let any of the mixture drip onto the soil. Don’t compost any vines with berries; bag them for disposal instead. With porcelainberry,  a carefree garden is out of the question. You and your family must become very vigilant weeders and make sure to pull out the young seedlings as soon as they appear. This way, you can avoid the serious situations that call for your “big guns.”

Please come to the next meeting of the Hyattsville Horticultural Society on Saturday, August 16, at 10 a.m. at the municipal building, 4310 Gallatin Street.

PHOTO: Hooping it up at the Fourth Annual Downtown Hyattsville Arts Fest