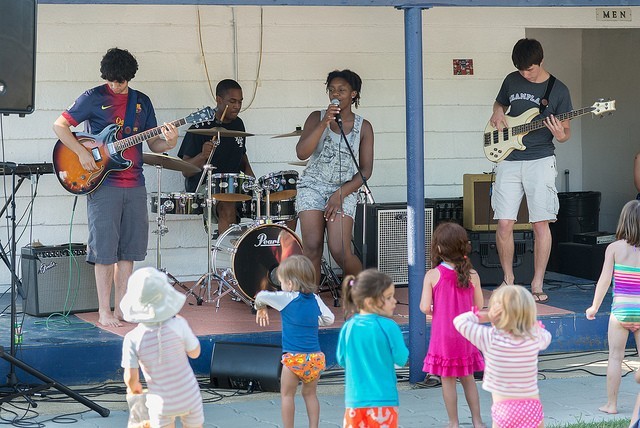 BY ROSANNA LANDIS WEAVER — One of the many pleasures of this editorial gig is the opportunity to dig into local topics and questions that are of particular interest to me.  As a longtime member of the Prince George’s  Pool, which is known as PG Pool,  I’ve been fascinated by its evolution and recent population explosion, and this month I was able to spend time looking at that.

After all, MBAs devote great effort when attempting to market products, to understand the strange alchemy of tipping points and popularity.  The astronomical increase of folks interested in joining the PG pool, from less than 200 families a decade ago to over 1,400 now (current membership combined with waiting list) intrigues me.

Like some of the old-time members I interviewed. I have fond memories of the days when everyone knew your name, and parking was never a problem. Yet at the same time I’m delighted by the people I’ve met more recently, the increased racial diversity, and the amazing amenities the new members and their dues have brought us. (There was NO shade by the toddler pool when my children were toddlers.)

While crowding causes some day-to-day inconveniences, of more concern to me is whether the larger membership can maintain the welcoming and accepting culture I’ve always found there.  The members of the cooperative pool, knew it fondly as “the Cool Pool.” The increased membership and associated logistics has now inspired some to call it “the rule pool.”

But my experience has been that the spirit remains largely unchanged,  through the good efforts of many people with generally shared ideals of what community should be.  When spats flare on the list serve, members step in to restore the focus to larger values. For example, in a recent discussion of the lap lane etiquette one member chimed in, “Civil discourse should take precedence at the Cool Pool, lest we lose our right to that title.”

The struggle to maintain warmth in a time of growth is instructive for citizens of Hyattsville who may be on a similar trajectory of being “discovered” and are beginning to experience the changes that brings. Those of us that have been here for a while love the new restaurants and stores but sometimes hate the traffic.

But the logistics are again less critical than what size does to spirit. There’s a balance: community requires a certain level of knowing and being known which may be impossible after a certain population is exceeded.  Hyattsville as a town has already exceeded that number, but still allows its residents to experience “small town” moments in neighborhoods, schools and even on listservs.

How do we preserve what drew us here in the first place? How does Hyattsville remain fun and funky? In urban neighborhoods, gentrifiers may alter the diversity that attracted them to a neighborhood by their very presence.  Given our housing stock, among other things, that’s unlikely to happen here.  The challenge of growth is accommodating more young single condo buyers, retirees and all of us in between while maintaining a feeling of community.

As the city grows, we will need to graciously accept the bad with the good, and continue to try to preserve the best.  In my opinion, PG Pool is a pretty good guide for that.