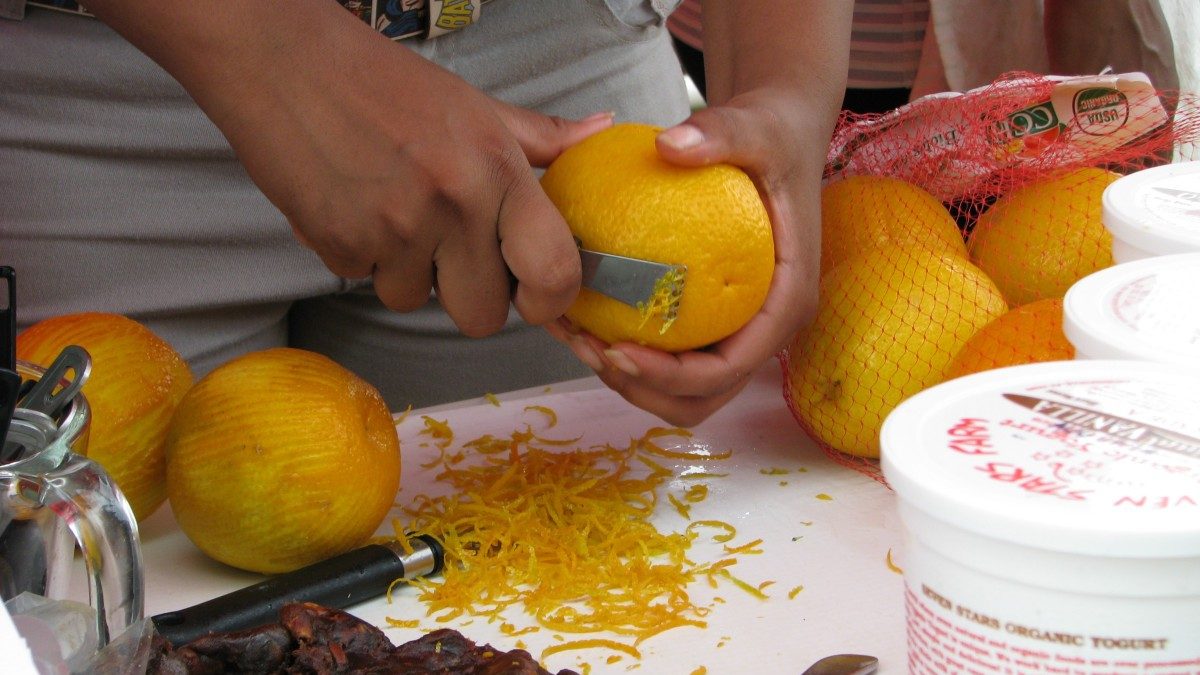 From seed to feed

Planting, weeding, harvesting, cooking: For the 20 high-schoolers participating in ECO City Farms’ Seed to Feed Summer Youth Program, it’s all in a day’s work. The program exposes students to every aspect of the food system, from planting to market.

This year, the farm hosted three Seed to Feed programs, each of which was targeted at a different age group and ran for four weeks. The program took place at the nonprofit’s new 3.5 acre Bladensburg farm, where students spend four days a week working on-site. (Previously, the program was hosted at ECO City’s original farm in Edmonston). The fifth is spent on field trips around Prince George’s County.

“It’s cool to get hands-on experience,” said participant Sumaiyah Liggans, who attended the session that ended on August 1. For some, the program is the first time they’ve seen many of the vegetables and grains — like wheat berries. For others, it’s a chance to engage with relatives.

“When I was growing up, my grandma had a garden and I always wondered how to do it,” said participant Parker Brock.


Seed to Feed attendees prepare a daily lunch with local chefs, participate in workshops with slam poets, and engage with food activists, artists, athletes, and farmers on site and through field trips. With a strong focus on multicultural and multiracial programming, ECO City’s programmers incorporate indigenous food traditions and adapt to students’ religious and cultural dietary requirements.

“It’s always about connecting and reconnecting with the food — through family, through cooking, and through the arts,” said Viviana Lindo, the organization’s director of community education.

The field trips introduce students to food history, production, transportation, and processing. On a previous session’s trip to Giant’s Landover Hills warehouse, for example, students saw what produce the grocery chain considers waste, and why. During a field trip to the Accokeek Foundation, students learn about Native American agriculture.

“Part of what’s important to us is growing the next generation of farmers and eaters,” said Margaret Morgan-Hubbard, the organization’s founder and CEO.

Attendees come from all over Prince George’s County, and many are recent immigrants. Most of the students said the program reinforced or reintroduced them to the importance of growing food.


“I was always looking for something like this and I finally found it,” said Semira Said, an attendee who described herself as “always interested in nature.”

ECO City Farms was founded in 2009 in Edmonston. Seed to Feed began in 2011, though it has since expanded. The Bladensburg location, on Emerson Street by Autumn Woods apartments, is a work in progress. But it will eventually host a food forest, pollinator garden, and vegetable plots all constructed on permaculture principles.

True to ECO City’s mission “to promote locally sustainable food systems in Prince George’s County,” the site is in one of several areas in the county designated as a “food desert” by the U.S. Department of Agriculture. ECO City Farms aims to change that and is working to expand their Community Supported Agriculture (CSA) offerings.

Meanwhile, students are getting a good look at what it takes to start up a farm. Right now, the Bladensburg site doesn’t have a permanent kitchen, but they constructed a shelter that will eventually host a cooking space. (Students worked out of a camp kitchen and trailer with complete amenities alongside chefs from Washington, D.C.-based catering company Zenful Bites. Each day, they produced a new feast: One lunch included a tamarind and lemongrass smoothie alongside pad thai and a salad of freshly harvested vegetables).

“We have plants to build the kitchen as a gathering place,” said Lindo, and “an amphitheater where students can perform their poetry.”

Students made do just fine. The poetry workshops took place in an apartment complex near the farm, where attendees worked with Regie Cabico, a spoken word poet who has appeared on two seasons of HBO’s “Def Poetry Jam.” Large trees over the picnic tables provided shade, and students and plants alike had access to plenty of water.

Seed to Feed is free of charge. For their participation, students receive community service hours, a certificate of completion, and souvenirs – like pictures – from the program.

School district will phase out some security personnel