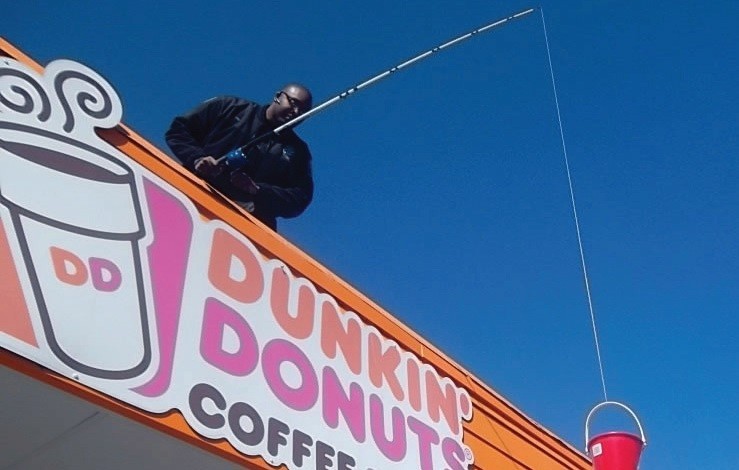 Officer Bernard Jones, of the Cheverly Police Department, fishes for donations to Special Olympics from the roof of Dunkin’ Donuts at an annual fundraiser, held the last weekend of October. Photo courtesy Mike Persley.
Uncategorized

On the last weekend of October, police officers from several jurisdictions traded shifts on top of a building in Queens Chapel Town Center. But they weren’t on a stakeout; they were raising money for a good cause.

From 6 a.m. Saturday, October 26, to noon on Sunday, October 27, members of the Hyattsville City Police Department and fellow officers sat atop the Dunkin’ Donuts at 3030 Queens Chapel Rd. in the annual “Cops on Rooftops” charity event. It was of many done by police statewide to raise money for the Maryland Special Olympics, which serves 6,500 athletes who compete year round.

“It’s a great way to not just raise funding, but to show what kind of great athletes we have,” said HCPD Chief Douglas Holland. He also chairs the Law Enforcement Torch Run, a series of fundraising runs done by police officers on the lead-up to the Special Olympics.

Holland sees the event as a way to show the community the lighter side of being a police officer.

“It’s a great way to have our officers seen in a different light,” said Holland. “It helps break down barriers between police officers and folks, makes our officers more approachable to young people.”

While occupying the popular doughnut franchise, the police sold hats and T-shirts, greeted customers inside the restaurant,  waved to friendly passersby, and most importantly, braved the cold.

The idea began back in 2009 when a group of law enforcement officers in Illinois took to the rooftops of 94 Dunkin’ Donuts across the state and raised $182,000 for Special Olympics. The idea quickly spread across the country, finally coming to Maryland in 2011.

In addition to law enforcement officials, athletes who benefit from the fundraisers are also on hand at the doughnut shops.

“Our athletes are obviously our best advocates for their program,” said Betsy Jiron, senior director of special events for Special Olympics Maryland, “and it’s nice to get them out there.”

Among the athletes at the Hyattsville location were Desiree Holland, the police chief’s daughter, who competes statewide in swimming and cycling and participated in the 2006 Special Olympics in Beijing. Joining her there was Michael Heup, the Law Enforcement Athlete Ambassador, who participates in sports ranging from soccer, floor hockey, track, powerlifting and cycling.

“I practice every day,” said Heup. “It takes a lot of practice and hard work.”

According to Jiron, Maryland law enforcement is  #1 for Special Olympics fundraising in the world, a feat which includes police forces in 43 countries.

In 2012, police raised over $3 million through events like Cops on Rooftops, the 5K Fort McHenry Tunnel Run, and the New Year’s Day Polar Bear Plunge.