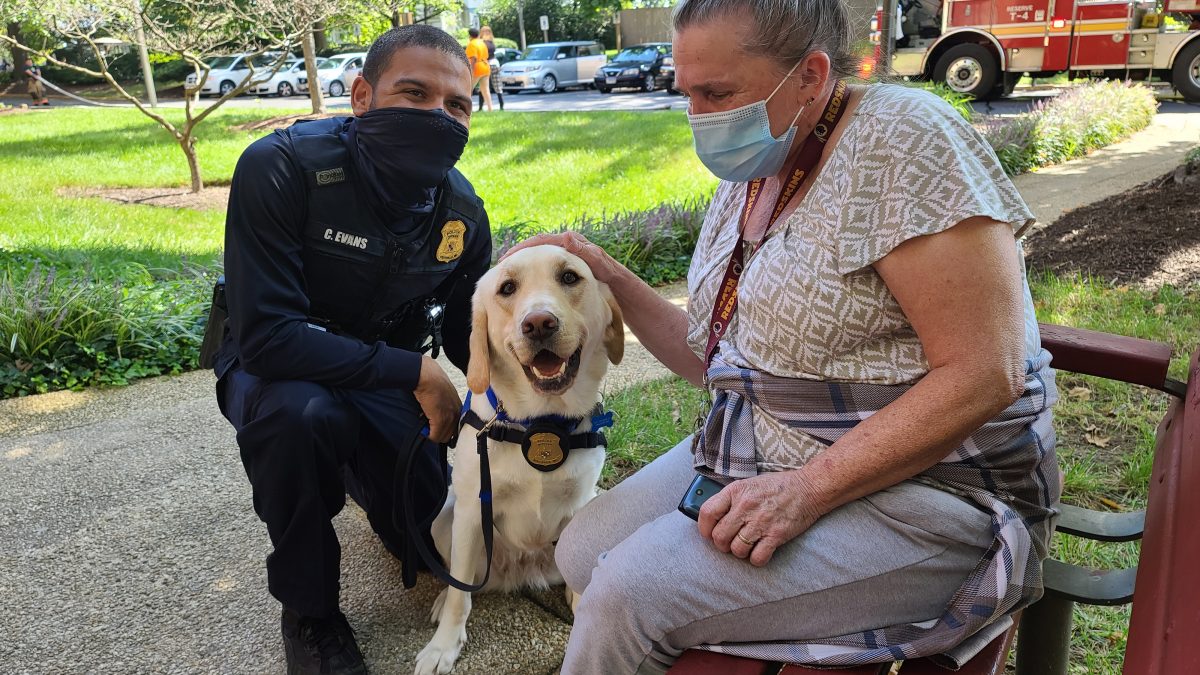 Nola V and her handler, Cpl. Chris Evans, helped out at an Oct. 1 fire at the Friendship Arms apartment complex. Courtesy of the Hyattsville Police Department
Hyattsville

Prince George’s County Fire Department (PGFD) officials said 160 people were displaced Oct. 1 after a fire broke out on the 7th floor of the Friendship Arms apartment complex, in the 5800 block of 42nd Avenue in Hyattsville.

A resident reported the fire at 11:15 a.m. Firefighters were dispatched to the scene immediately.

While firefighters worked to extinguish the fire, rescue squads swept the building, searching for anyone who needed to be evacuated. All searches were negative, and no residents were injured. However, PGFD officials reported that one firefighter was transported to the hospital with injuries that were not life-threatening.

Tyrone Harrison, who has lived at the Friendship Arms apartment complex for close to seven years, said he did not realize there was a fire until he received the evacuation alert.

“It was just that it was smoking a bit,” he said. “The firefighters put [the fire] out, and we had to evacuate the building and move out.”

Jennifer Donelan, the director of public information with the Prince George’s County Fire/EMS Department, said smoke was rising from the roof when firefighters arrived, and a fire was located in the ceiling above two units on the top floor.

“There was thermal damage to several electrical outlets,” Donelan said. “We put the fire out, but it kept sparking.”

Donelan said firefighters could not isolate the electrical line to only the 7th floor, and leaving the power on could have risked rekindling the fire, so the decision was made to cut power to the whole building.

“It appeared at the time to be electrical in nature, but the word ‘appeared’ is very important because we don’t have a final origin and cause,” she said. “What we know is [that] with the power on, it continued to spark, with the power off it stopped sparking.”

One hundred sixty people were evacuated so firefighters could safely cut the power and search for the fire. The Prince George’s County Office of Emergency Management assisted residents with short- and possible long-term accommodations.

According to Harrison, residents were temporarily housed in hotels.

Fire marshals made an initial damage estimate; according to Donelan, the property damage “looked to be about $10,000.”

Firefighters sometimes have to open up walls or ceilings to locate fire in concealed spaces. In this case, Donelan said, “We had to pull a lot of the ceiling out so that we could see and be 100% certain that the fire was out.”

According to Donelan, the cause of the fire is still undetermined. Residents have, however, moved back into the apartment complex.

Harrison said that he and other residents believe there is still repair work to be done.

“We’ll be glad after they fix the top floor,” he said. “They fixed everything but the 7th floor.”

Students, Residents March to Save the Guilford Woods