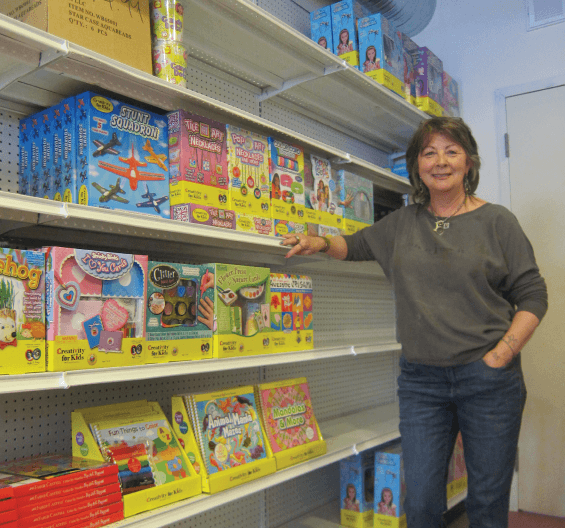 BY SUSIE CURRIE — This month, Mike Franklin will unveil the biggest change to his namesake establishment in 11 years: a 900-square-foot addition to the store that contains nothing but toys.

Franklin has owned the building next door to his restaurant since 1995, when he bought it from longtime local jeweler Julian Hanley. For a while he rented space to a tailor, but for the most part it has served as storeroom. Most recently, it served as a staging area for the installation of “Hyattsville After Dark,” the one-of-a-kind kinetic light mural that became the city’s latest public art in April.

Now, storage has been relegated to a small backroom as the front is readied for the public — especially the younger members. In contrast to the current store’s exposed brick and low lighting, this new area is white and bright.

“Originally, this was going to be a party room,” said store manager Leni Lewis on a recent afternoon as she unpacked board games and craft kits while shelves were being installed nearby. “But I’ve worked with Mike for long enough that I know Plan A always turns into Plan Q.”

Lewis (official title: “retail goddess”) has been manager since Franklins 1.0, the single-story deli and toy/gift store that opened in December 1992. Ten years later, a major expansion added the full-menu, two-story restaurant and brewery that has become a landmark on Baltimore Avenue. At that time, the store expanded as well, filling much of the former deli’s digs with displays of wine and beer.

With this latest expansion, Franklin said, he considered moving the beverages into the newly rehabbed room. But “the space didn’t lay out right,” and in the end, the toys won out.

Toys and games had been taking up about 600 square feet of space at the front of the store. Moving them into a space that is 30 percent larger, he said, will allow for less crowded displays.

The “kitchen-gadget section,” Franklin said, will take their place, while the wine and beer section in the back will be beefed up. He is also considering ways to carve out space for books by local authors.

In a way, the new space represents Franklin coming full circle. When he and wife Debbie moved here in 1991, he was a veteran toy salesman, and top-shelf toys have always been a part of the business.

Although it wasn’t the intention, Lewis pointed out that the toys will no longer be visible from the restaurant. Instead, people waiting for a table will see “a wall of hot sauce, with maybe a bottle of wine here and there.”

Nature Nearby: A smelly harbinger of spring

My Two Cents: All about Whole Foods? Two views of the proposed Cafritz development