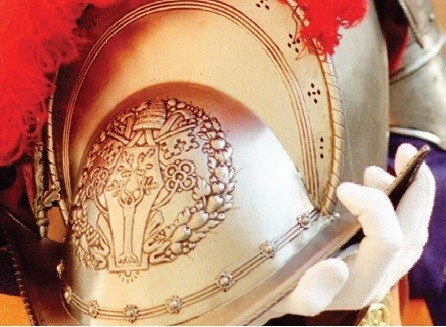 BY SUSIE CURRIE — Andreas Widmer, one of many Hyattsville residents in academia, is the director of entrepreneurship programs at Catholic University. Before joining the faculty last year, he started, ran, funded and advised several businesses over a lengthy career, and started a foundation specializing in enterprise-based solutions to poverty.

But the job he got at 19 may be the one that made the deepest impression. From 1986 to 1988, he was a Swiss Guard in Vatican City, serving under Pope John Paul II in the oldest continually active military corps in the world. Though he didn’t know it at the time, what he learned about leadership from the pontiff would influence the rest of his career and eventually be distilled in a 2011 book, The Pope & The CEO.

Last month, he was one of millions who flocked to Rome for the April 27 ceremony officially declaring his former boss a saint.

“It’s amazing to see how many people [John Paul II] resonated with,” said Widmer, who made the trip with his wife, Michelle, and 10-year-old son, Eli. “On the streets during the canonization it was very moving to hear people talk about ‘their’ new saint — each in their own way, each from their own perspective, but everyone profoundly thankful for having known him.”

For Widmer, that path began in 1986, when he became the first Swiss Guard from his family in more than a century. (Two nephews have since followed him.) He met the requirements: Swiss, Catholic, single, male, clean-shaven, between 19 and 30, and at least 5 feet 8 inches tall. (In fact, he is full foot taller than that, while Michelle is 5 feet 2 inches).

And he had just completed another prerequisite: the military training that Switzerland requires of all its male citizens once they turn 18. Swiss Guards, who have been stationed at the Vatican since 1506, get additional training, although when they are starting in service their role is largely decorative. They are the ones in those signature, Renaissance-style striped uniforms of red, gold and blue. They aren’t allowed to talk or move, although some tourists delight in testing this, and that scary-looking medieval weapon they carry (a halberd) is just for show.

“They’re not responsible for any safety or security,” explained Widmer. That’s up to the more senior members, whom he compares to the U.S. Secret Service: ever-present but invisible. “The actual protecting, we do in a black suit.”

To his amazement, he was anything but invisible to the pope. In the book, Widmer describes guarding the papal apartments on Christmas Eve during his first month on the job, feeling especially homesick after talking to his family. The youngest of six, he had never spent the holidays away from home.

When John Paul II emerged from the apartment for midnight Mass, he stopped, studied the 19-year-old trying to keep a stiff upper lip, and guessed the problem. He came over and took the young guard’s hand, thanking him for the sacrifice he was making and promising to pray for him during Mass.

“That was all I needed,” he writes. “Someone had noticed my pain, someone had cared, and that someone was the pope himself.”

There were many more such interactions, and hundreds of hours observing John Paul II interact with everyone from world leaders to homeless gypsies to his fellow guardsmen.

He interacted, Widmer recalls, more as a coach than a remote authority figure. “In our conversations, he wasn’t a stern or authoritarian figure, lecturing me and making me feel inadequate.  He was like a coach, urging on one of his athletes.”

That attitude was evident in the pope’s final words to Widmer, who was leaving to marry the pretty American college student wrapping up her studies in Rome.

“Go out into the world and bring what you have learned here with you,” said the pontiff. “I have great hopes for you.”

Today, 28 years later, Widmer remembers those words and tries to capture that spirit in the classroom.

“I love to deal with the really difficult students because I was one of them,” he said. “I was a mediocre student — and that’s being nice. I make a special effort to focus on them. John Paul had more faith in me than I had in myself, and hopefully I can do that for my students.”

Sparks fly in one local backyard