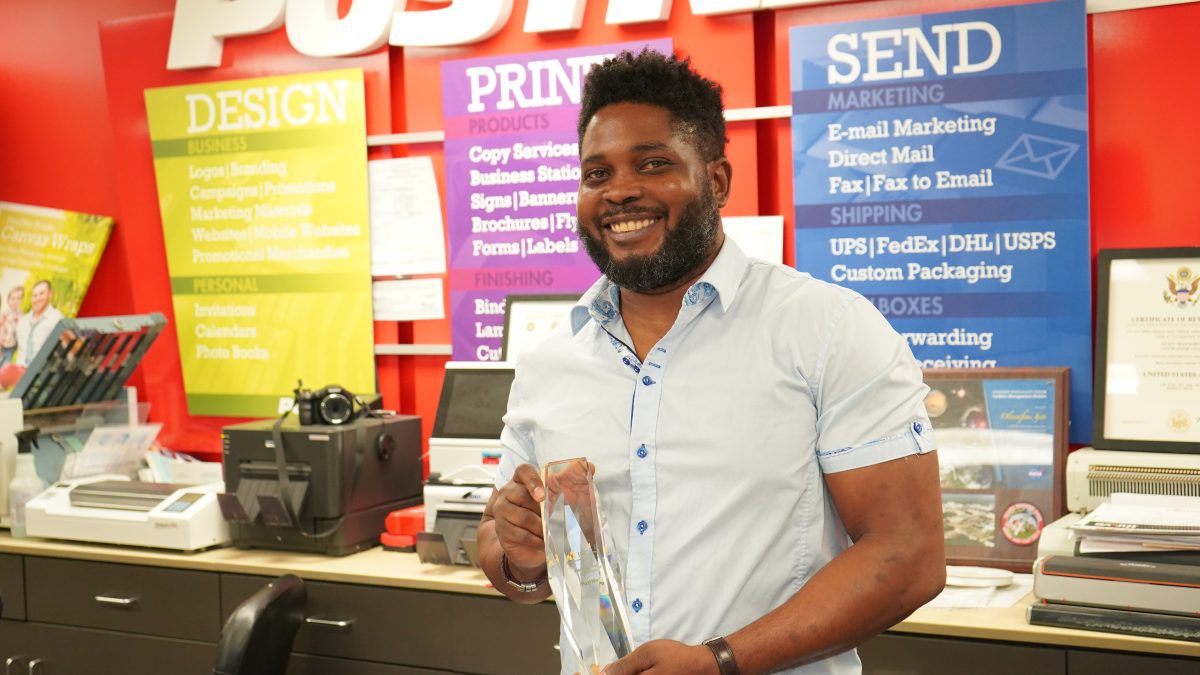 For this veteran, running his printing shop is therapy

On a Friday morning in late November, a customer walks into the PostNet shop at 5557 Baltimore Avenue, in Hyattsville. She needs to express some documents, but says she can’t pay right now. Oluwafemi “Femi” Ijiti tells her, “I got you, I got you.”

“You’re going to send it out? It’s very important,” she says.

“I got you,” Ijiti repeats, with a chuckle. His voice is hoarse from Thanksgiving celebrations with his family the night before.

Ijiti, 44, is wearing sneakers, a black dress shirt and an easy smile that morning. His wife, Nana Ijiti, describes him as a people person who can walk into any place and start a conversation. Ijiti and his family opened the franchise branch in 2014, offering services like printing and shipping.

In January 2022, Ijiti’s PostNet branch received the FSC First’s Veteran Business of the Year award. FSC First facilitates loans to small and minority businesses in Maryland, with a focus on Prince George’s County. Ijiti received a loan through FSC First in 2014, as he was developing his business.

“We wanted to give this award to a veteran that we feel has really been able to triumph with their business,” Roger Reynolds, marketing and outreach coordinator at FSC First, said during a phone interview with the Hyattsville Life & Times (HL&T).

Ijiti experienced hardships starting up the franchise, according to Reynolds, but he managed to pay back the loan early. Over the pandemic, the business started to turn a profit. “We felt that was great,” said Reynolds. “[Ijiti] being able to see profit and remain optimistic through the hardships.”

Nana Ijiti described how they were able to persevere during the challenging first years of their small family business.

“Femi, being who he is, knew what he wanted to do and was focused on the goal,” she said. Nana Ijiti described her husband as a determined person who takes risks, a hard worker who is incredibly disciplined: “Femi will work on holidays. He goes to the gym, opens up PostNet and stays late.”

The award from FSC First validated their efforts and tenacity. Nana Ijiti said, “Getting that award really lets you know we are on the right path.” Femi Ijiti agreed: “It was wonderful; it felt good to be recognized.”

For Ijiti and some Hyattsville residents, the store is much more than a business; it is a place where they can find community.

“We get customers [who] come in here to just talk to me or some of the guys that work here. Pick up a tape, buy tape and leave it here, just to support,” said Ijiti, who lives in Bowie with Nana and their three school-aged kids.

This sense of community means a lot to him. “It’s therapeutic for me,” Ijitii said of running the business.

Ijiti was born in Lagos, Nigeria. When he was 13, his family moved to Bloomfield, N.J. Shortly before his 18th birthday, he enlisted in the military with “naïve” expectations. “I think I watched a lot of ‘Rambo’ movies,” he said, laughing. As a teenager, he aspired to learn everything he could in the Army and then run for president in Nigeria.

In 2008, Ijiti came back from Iraq after three years of deployment. “I was hurt,” he said. It took him some time to realize that he had returned from combat traumatized and needed psychological help.

Ijiti is one of many veterans who live with post-traumatic stress disorder, a mental health condition that’s triggered by traumatic events. Studies have shown that between 4 and 17% of U.S. Iraq War veterans struggle with the disorder.

“You come back to society, and society expects you to just get back to reality, and life is good. No,” said Ijiti. Instead, he said he was an empty shell when he returned. Ijiti experienced civilian life as if he were still in combat — seeing danger everywhere.

Just three years ago, Ijiti retired from the military after 24 years in service. He put up his certificate of retirement on his shop wall, close to the peer recognition award he received in 2004 while at NASA, where he worked in procurement.

Ijiti remembers his first time at therapy, in 2009. He said he found sitting in a room with veterans, of different ranks, who were struggling with the same problems, weird. It was as if, before he even spoke, someone had told them exactly what was going on inside his head.

Since that experience, Ijiti has made it a point to recommend therapy to other veterans and active members of the military who are experiencing mental health problems — especially those with PTSD. He’s kept in contact with some of the men with whom he served in Iraq, including John Dethdy. Ijiti and Dethdy met while deployed in Iraq and have remained close friends since, supporting each other through hard times. “He’s an amazing soldier and brother,” Dethdy told the HL&T.

“With my PTSD, I had to create a whole buffer zone not to trigger certain things,” said Ijiti. He appreciates the predictability of a routine: getting up at 4:30 a.m., going to the gym by 5:30 a.m., leaving for work at PostNet and then spending time with his family after work.

Working in the “diverse melting pot” of Hyattsville has been a blessing to him. “I could’ve been that guy on the street begging for a dollar,” said Ijiti. Instead, he is a business owner and an involved father and husband. His message to other struggling veterans: “There’s hope.”

PHOTO: The makings of a Whole Foods

After series of setbacks, Shortcake Bakery is back