For one local pastor, same-sex marriage is a matter of hospitality

BY LIZZY MCLELLAN — Earlier this month, Maryland became one of the first three states to legalize same-sex marriage by popular vote. This momentous decision will have particular meaning to one Hyattsville church.
Hyattsville Mennonite Church, with 250 members, took a stand on the issue of gay marriage long ago, in 1986, when they welcomed their first openly gay member. More joined over the years and the church accepted them, believing it was practicing the Mennonite value of hospitality. Its pastor, the Rev. Cynthia Lapp, estimates there are about a dozen homosexual members. 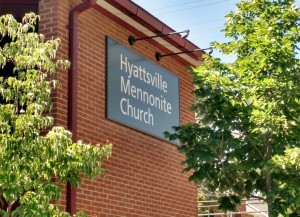 Lapp says she sometimes has a hard time explaining the nature of her congregation.
“There is a certain stereotype of Mennonites being just like the Amish and that’s not quite right,” she says of the church. It’s located on East-West Highway but is currently meeting at the nearby University Park Church of the Brethren while its main building undergoes renovations.
The Mennonites are descended from Swiss Anabaptists (believers in adult, not infant baptism) who sprang up during the 16th-century Protestant Reformation. Mennonites are opposed to violence of any kind, are anti-war and emphasize peace, justice and simple living. They are distant cousins of the Amish, also descended from Swiss Anabaptists.
Lapp herself does not fit the typical modest and unassuming Mennonite clergy stereotype.  With her spiked hair, colorful scarves and cowboy-style boots, she is known locally as the minister who began performing same-sex marriages in 2010, when it became legal in the District.
Her first one was for two men who had been together for 27 years. She said that she was unsure if she wanted to take this leap, but in the end was “honored” to be a part of it.
Lapp says she will not turn away non-Mennonite homosexual couples who want to marry in her church. They would, however, have to take part in the same pre-wedding worship experiences she requires of Mennonite couples.
In 2005, the Allegheny Conference of the Mennonite Church USA, which encompasses Mennonite churches in Maryland, Pennsylvania, Delaware and West Virginia, disciplined Hyattsville for its recognition of same-sex couples.
The church lost its eligibility to vote within the conference and for its members to be elected to office in the conference or in the Mennonite Church USA. Forced to choose between accepting same-sex couples and maintaining rights within the denomination, the church chose the former.
“The idea of hospitality took on a whole new meaning,” says Lapp.
The Mennonites’ belief in peacemaking keeps them from arguing over ideology in cases such as this, so dissenting congregations eventually just split from the larger church. However, no split has officially taken place yet with the Hyattsville congregation.
In early 2009, the Hyattsville church applied for membership in the Atlantic Coast Conference. But national membership guidelines require a congregation to be reconciled to its original conference before it can transfer to a new conference.
“ACC said they would like to have Allegheny Mennonite Conference and Hyattsville resolve their differences first before considering ACC membership,” Lapp told The Mennonite magazine that December. “We were disappointed; I don’t know that we were surprised.”
In March 2012, AMC leaders announced that they would like to “explore reconciliation,” and talks have been ongoing since then.

Auntie Diluviana: Volunteers sign on to Aging in Place

Jimmy Johns in Hyattsville not a part of data breach

Hyattsville Life and Times, 5 years ago 4 min read
Nature Nearby

Nature Nearby: Empty nests in winter